Sometimes I come up with ideas and then never get around to doing anything with them. I was reminded of one such idea recently, when a friend shared a link to a fantastic scallopy, lacy cast-on posted at Twist Collective, called the Eyelet Cast-on . Go have a look and add it to your repertoire; it’s quite beautiful, and useful for lace, as it will accommodate blocking.

Anyway, back when I was first discovering more than the one or two cast-ons I learned as a beginner, I came up with something related. It has a number of different qualities from the Eyelet Cast-on: one, it’s not very elastic or loose; two, it has only one chain in between each new stitch on the needle, and three, the yarn overs are not twisted. The instructions as given will produce an odd number of stitches. There’s an easy way to make an even number of stitches, but that is left as an exercise for the reader. (Why? Because.)

First, put a backwards loop (also known as a half hitch) on your needle.

Next, insert your crochet hook into the loop from the left. 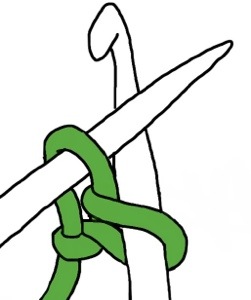 Pull a loop through. Now, in ordinary knitted-on cast on, you would put this stitch on the needle. instead… 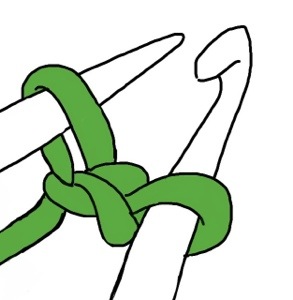 Pull another loop through. (Chain one, in crochet terms.)

Now put that stitch on the needle, leaving the hook in the stitch.

Knit the first stitch (no, don’t slip one). Now repeat the following two things to the end of the row: yarn over, knit one.

I now recommend working one plain row or round of stockinette before going on to anything fancier, but you may (as always when it comes to the needle arts) do as you wish, so long as it produces results you like and nobody gets hurt.

As you can see, I’ve added a photo!