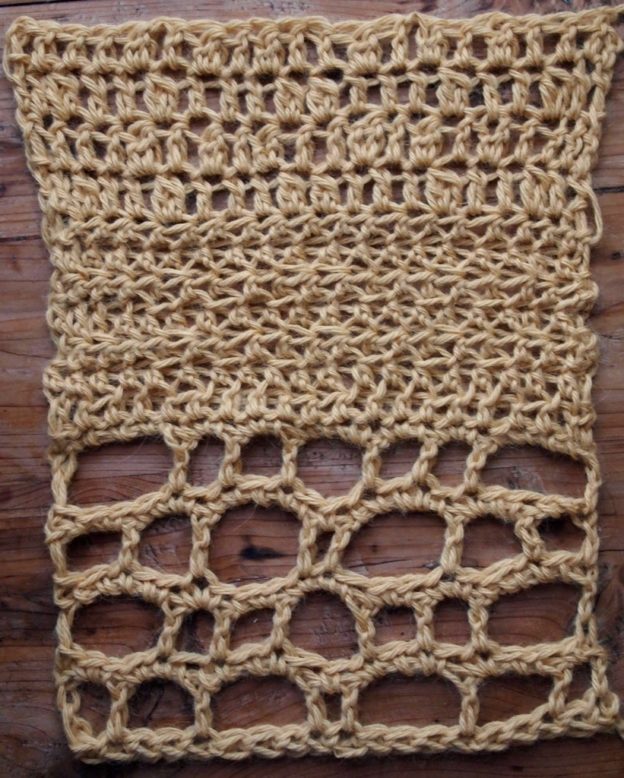 I’ve been thinking about ways of making my secret code grids work for crochet, and I’ve got a few starting points here. I haven’t written them up as stitch patterns, though I think it should be possible to reverse engineer what I’ve done. Please feel free to ask if you’d like more information!

The first thing was to think about how to transfer the numbers into crochet.

The numbers I’m using for the letters of the word HUG are 12 33 11. These are the numeric equivalents of the letters, only counted in Base 6. For more on this, see my original secret code post on choosing numbers. As described in my posts back then, there’s a range of ways to make a layout to work with once those numbers are generated.

I arbitrarily decided to make two rows of nine stitches each, and then filled in the chart by counting a number and then marking the next square, like this:

(The X marks the extra square added in to take it up to 18 squares.)

I decided to make the stitch pattern symmetrical, so I mirrored this design:

Now I have a symmetrical grid. Any stitch pattern based on this will be eighteen units wide by two rows high.

What follows are some, well, I won’t call them swatches because I don’t think there’s really enough repeats of the pattern to make them proper swatches. Explorations? Swatchlets? Please pardon my lack of proper terminology; I was eager to share the secret code part and didn’t want to wait on doing my research.

In the picture at the top of the post, I used some nice worsted weight alpaca to crochet a foundation base chain that was 20 stitches long so there would be a selvedge stitch on each side. If I had done two repeats of the pattern, I would have made the foundation 38 stitches long.

The middle section is worked in half double crochet. The counting stitches were worked in the front loop and the special stitches in the back loop. (All relative to the front of the work.) I think this might be too subtle, but maybe not.

The top section is double crochet again; the special stitches are clusters. This seems reasonably attractive, and while it isn’t really blatant, it isn’t too subtle either.

In the bottom section, I did that thing where you work a stitch in the row below. (I need to look up the name for this technique, obviously. It would be called a dip stitch in knitting.) I think this has some good possibilities, particularly if done in either variegated yarn or alternating stripes.

Now for the last swatchlet, which is Tunisian crochet. I’m afraid that Tunisian crochet in particular is something that I’ve been fiddling around with on my own, and I don’t know the standard terminology. But I think it’s worth sharing what I’ve done. Please feel free to correct me or ask questions!

In the bottom section, I used TSS on the right side except for the special stitches, which were worked like TSS except with the hook going through the bar from the other side. Since the chart was mirrored, I also mirrored which way the stitches leaned along the halfway point of the repeat. In the left side of the swatch the mirrored TSS was counted, while the special stitch was done in regular TSS. If this were done with two colors, the way the stitches lean might be pleasantly enhanced.

The middle section involved TSS, with a kinda-sorta-purl (in knitting terms) for the special stitch. (Worked with yarn in front and with the hook coming through the stitch from the opposite direction, but above the crochet chain. If the crochet chain weren’t there, it would look just like purl stitches from knitting.) Unfortunately, this turns out to have been so subtle it’s almost impossible to see, because the purl blips are tiny. (Yes, I know just enough to know that “purl” is a difficult term in Tunisian.)

The top section involves Tunisian Knit, with a different kinda-sorta-purl.This bit of the swatchlet is lumpy, but it’s kind of interesting. And the code stitches do show well!

Obvious other things to try: post stitches and tapestry crochet.

If you use my secret code technique with crochet, I would love to see your projects!