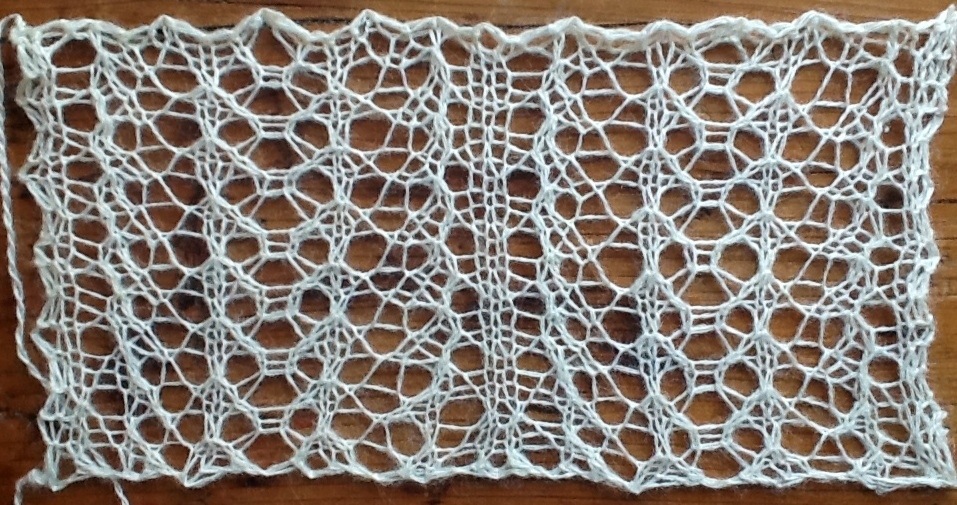 I had a request for making written instructions for my Hug knitting stitch pattern that would be suitable for knitting flat. I am going to do so, but I am also going to write up the process for making that conversion as I do it, just in case anyone is curious.

The key thing here is that no matter which direction you’re converting, you need to look at the instructions for every other row/round in the opposite order and flip them over so that you’re working the stitch that will produce the correct right side results. (I have yet to run into a case where this is impossible, though sometimes the stitch pattern will be mirrored.)

It turns out that this stitch pattern is not so very difficult to switch around. For a reminder, here is the chart and the instructions in the round.

The only change I need to make to rounds 1 & 3 is to turn them into rows.

The next instruction is lark’s head, which involves twisting the loops of the double yarn in opposite directions as you work them.

This is the order I like to use when knitting:

Drop both loops of the double YO. Bring your non-active needle in from behind to pick it up as if it’s one stitch, like this:

Twist it as you knit it by coming into the stitch from the left (knit through the front loop). There should still be some slack in the long loop you dropped; pick that up again so that it sits like this on the needle:

Twist it by knitting through the back loop.

Okay, then so far we have

Following round 2 from right to left, the next instruction is k8 again, so the last part of row 2 is p8.

Because Row 3 is a right side row, it stays the same as if we were working in the round. And because Round 4 is just plain knitting, reversing it and flipping it over means just plain purling.

That was actually pretty straightforward, I think (barring the fact that the lark’s head is something unusual), but not all stitch patterns are that easy. Unless something distracting comes along, I’ll do one of those next week.