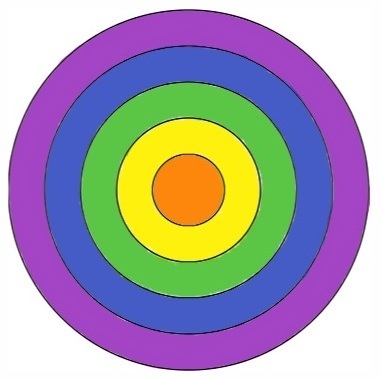 I was talking about math and design with my friend Lori, who designs crochet motifs (and uses a lot of geometry as a result) and I thought I’d collect my posts on the topic so far in one place as well as talking about areas of concentric stripes in circles (and therefore calculating relative yarn quantities).

The first is about figuring out the percentage of the finished area of a circle you’ve worked so far.

Alternately, you’ll be approximately halfway done when you’ve worked 70% of the rounds.

All this assumes a fairly regular density of stitches.

The second is my recent post about working out how much yarn you need for each stripe in a striped triangle.

Discussing the triangle stripe problem led to the question of the amount of yarn used for the stripes in a circle.

I wasn’t expecting to find as handy a visual pattern as I did for the triangle shawl, and indeed I didn’t. But I found a more useful rule of thumb than I expected, which I will summarize before showing my work.

This calculation assumes that the stripes each contain an equal number of rounds and are approximately the same density of stitches.

The area of a circle is π times the squared radius of the circle, often referred to as pi r squared.

I’m not going to use any particular units for this (though I could use the number of rounds, it’s just that rounds squared looks funny as the unit for area, even if it would be accurate).

The radius of each stripe is ten units, to make the calculations a little easier.

The orange inner circle is the easiest.

942.5 units squared is about three times as much as the area of the innermost circle. That seems pretty straightforward, but I need to see what happens next.

Hm, so the third stripe takes about  five times as much yarn as the center circle. 1, 3, 5… suggestive, but not a definite pattern yet.

I went on a couple of stripes further and the progression continued. It’s a very rough estimate, and each iteration gives you a little bit more inaccuracy, but it’s probably good enough to work with.