I’ve had a few questions about how I do my illustrations, and I thought I’d do a small tutorial. I don’t have the slickest style, but I think what I do mostly works (and has been improving with practice).

I’m going to try to make these instructions not require using a particular program; there are a lot out there that you can use on either a regular computer or a tablet. On my desktop computer, I use GIMP (free open source software that’s similar to Photoshop). On my iPad, I sometimes use Brushes and sometimes use Sketchbook Express. I haven’t really had a chance to play with it yet, but it also looks as if Pixlr would work on a desktop machine (it runs in a web browser).

The things I find essential for this process: the ability to use layers, the ability to import a photo, a paintbrush tool, and an eraser. A paint bucket tool can be nice, but it’s not necessary. (Brushes doesn’t have one; Sketchbook does.) Some of the features I show here are paid features in Brushes and not in Sketchbook.

If you’ve ever traced a picture using tracing paper, think of this like that. Alternatively, it’s kind of like those biology textbooks where they put the different systems on transparent pages so you can see them layered on top of each other.

So, start by taking a bunch of photos of what you’re going to trace. Take more than one, from different angles. The nice thing about tracing is that you don’t have to have a great photo and you don’t have to clean house first. That said, you do want good light and decent contrast so you can see what you’re tracing.

I’m going to make this a fairly simple post, so I’ve just got a picture of some plain knitting. I raised the contrast in iPhoto because I don’t have to worry about the colors being true to the original photo and I wanted to be able to see what I was doing more clearly. 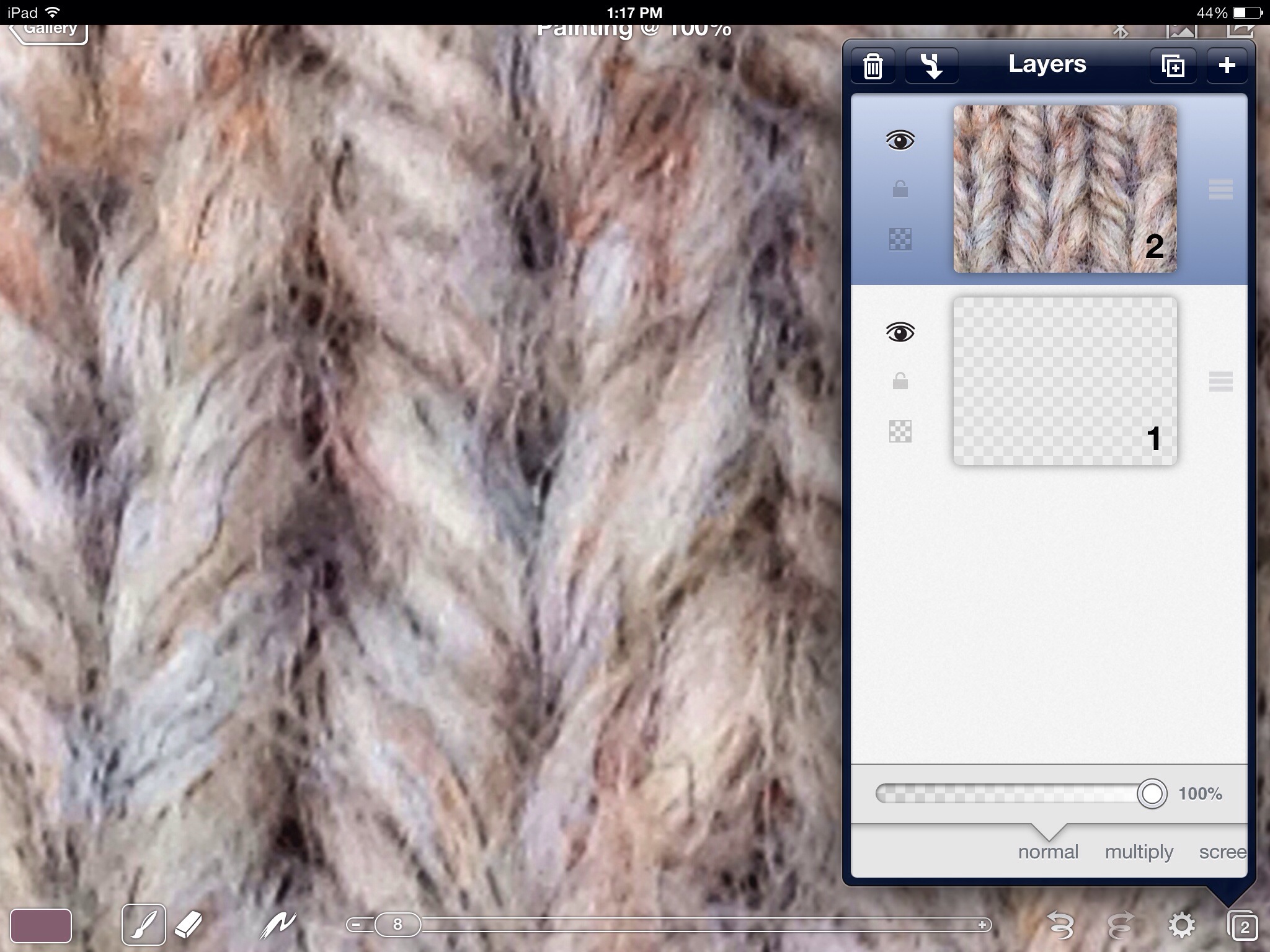 Import the picture into your paint program, zooming in on what you want to trace. (Brushes lets me do this on import. You might want to resize your original as necessary before importing.)

I’ve opened up the layer menu here. Brushes imports the picture so it’s the top layer. However, the reason I’m using layers is that I want to trace the original on a clear background so I can make the photo go away at the end. If it’s an available feature, I recommend using the lock button on the photo layer so you can’t accidentally make changes to it. 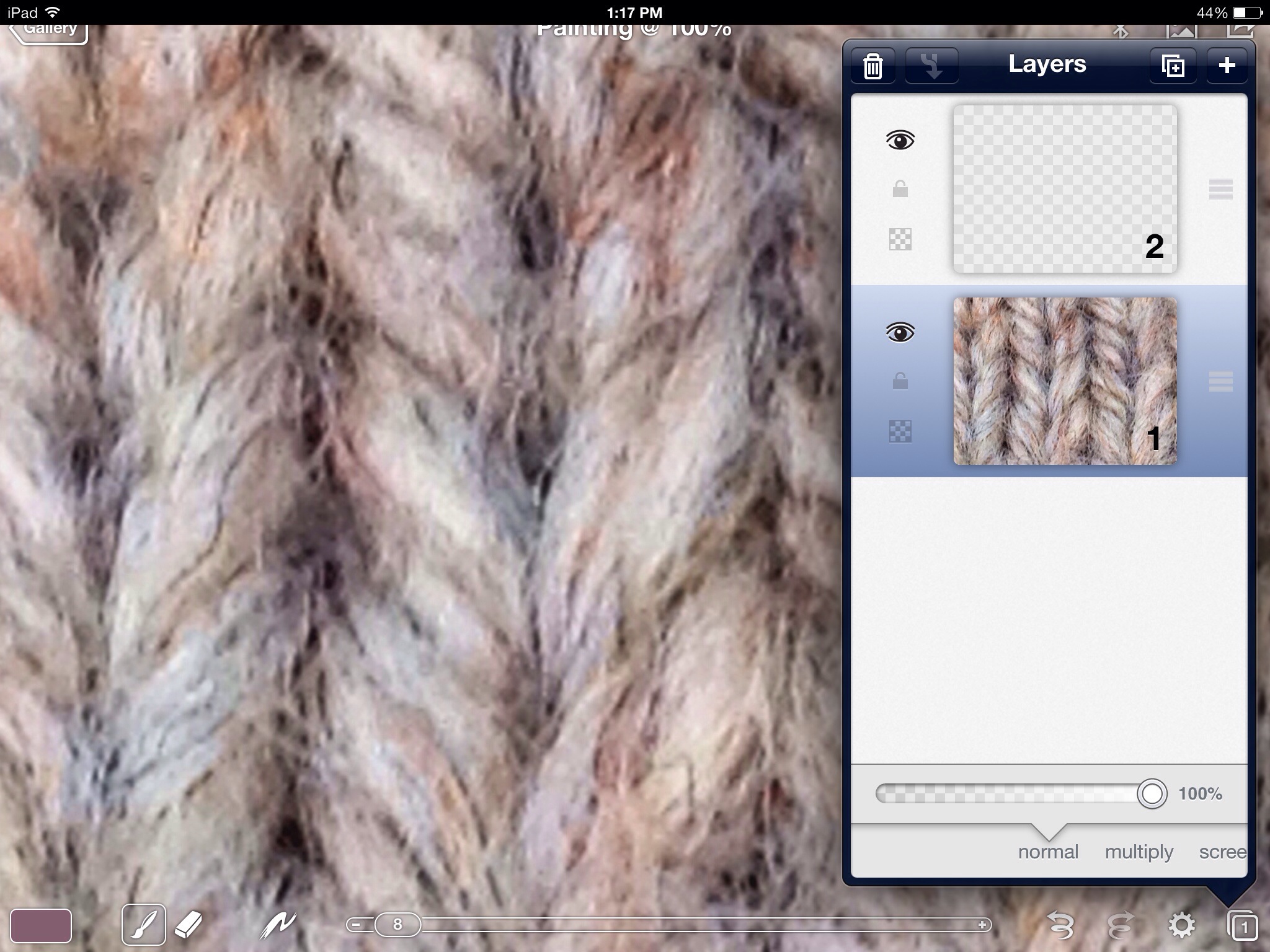 So I swapped the layers. Depending on what you’re doing, you might want to just add another layer on top. Doesn’t matter.

The next thing is to select the non-photo layer. Click or tap on it to make it be active, so that you won’t be drawing directly on the photo. 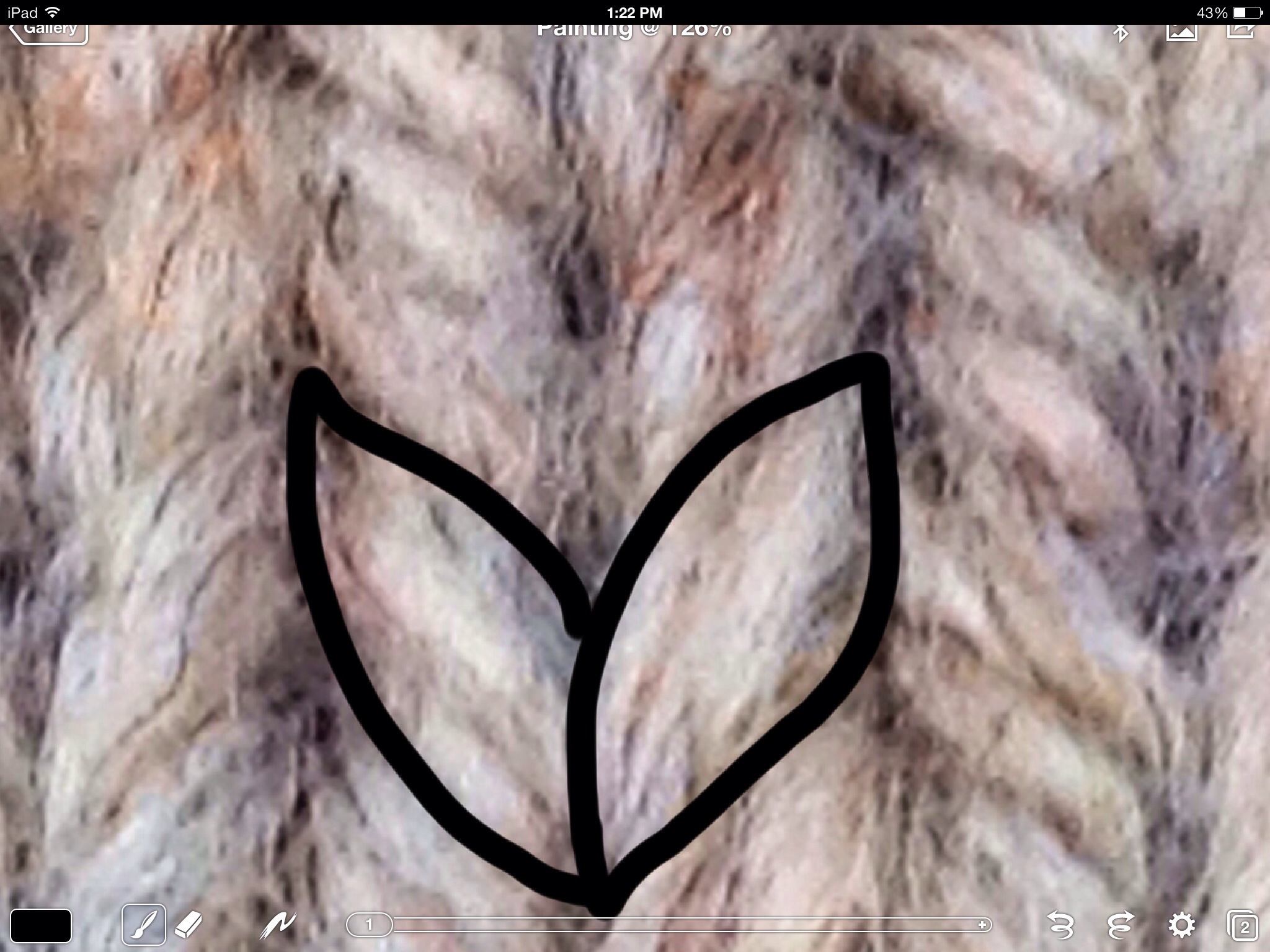 Select the brush you want and the color you want for tracing, then start working on it. I use a stylus on my tablet, and an external tablet with my desktop computer. A mouse is possible, but takes some practice. 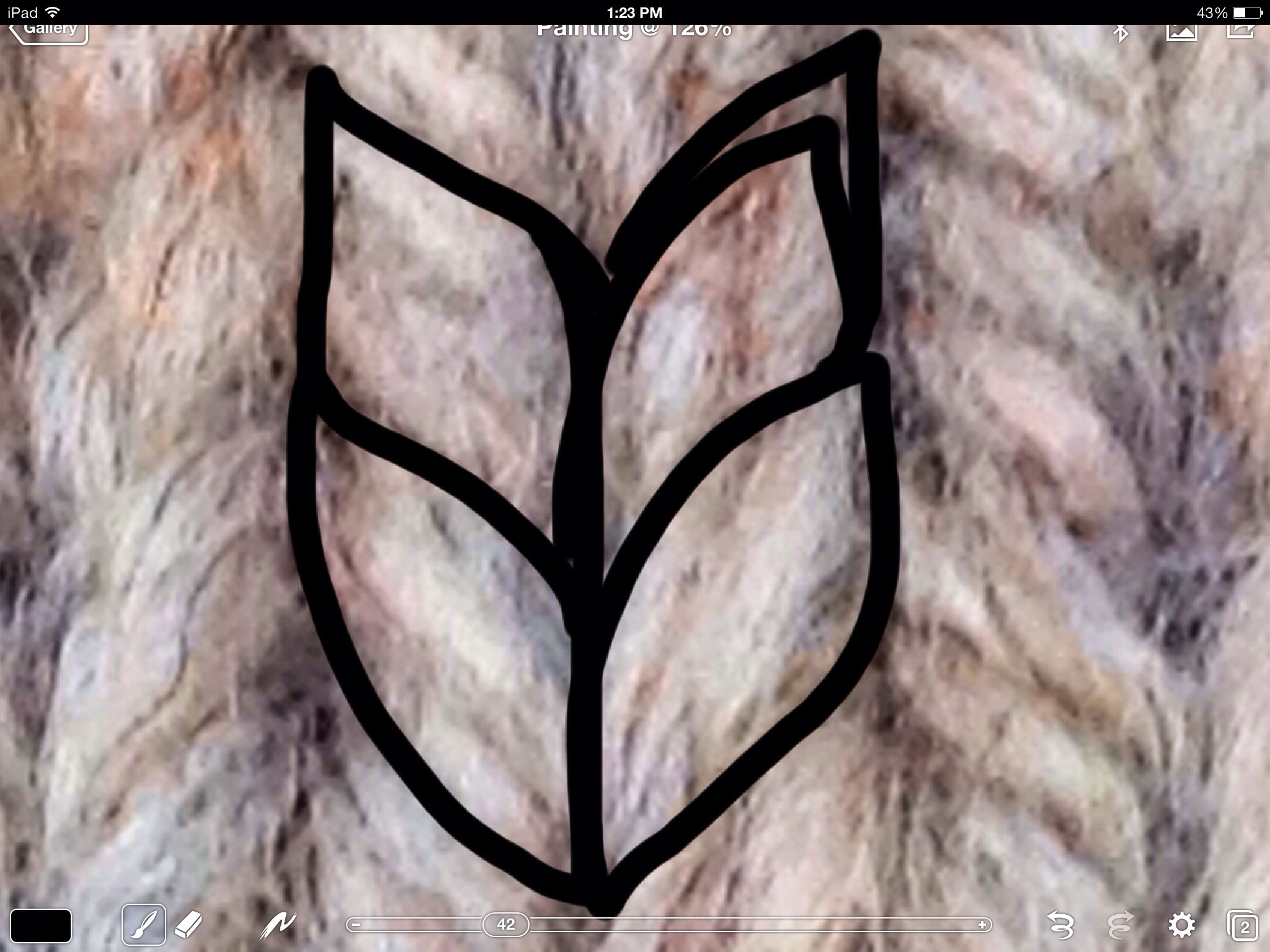 I traced two random knitting stitches here and then realized I wanted to adjust some of the lines using the brush and the eraser. 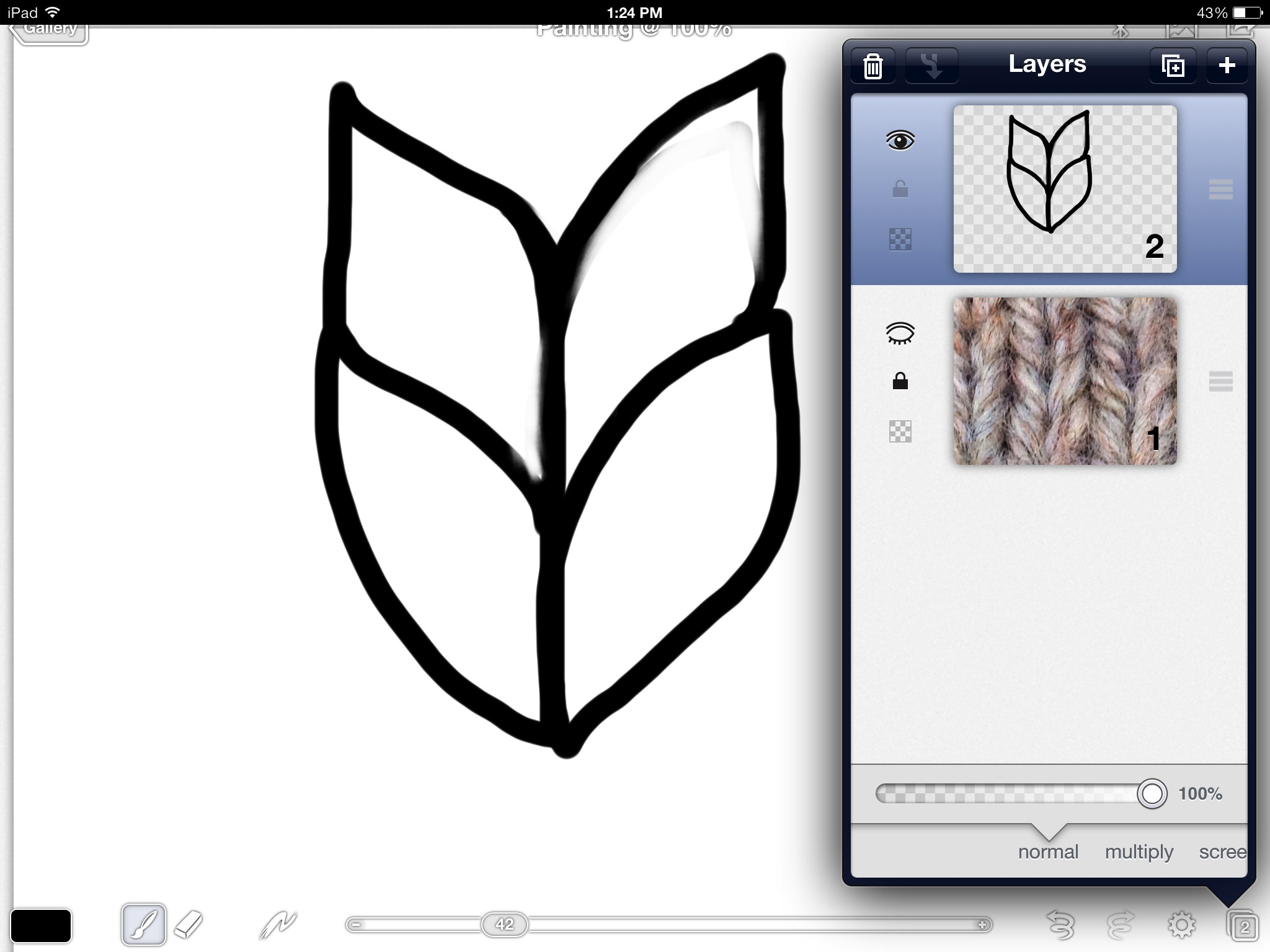 Then I remembered that I usually like to hide the photo layer at this point so I can see what I’m doing a little better. I tapped the little eye button, and now it’s hidden. I can finish erasing some of those smudges and add in some crisper edges to the lines with my brush.

Note that I don’t necessarily make my tracing match the original photo perfectly. Sometimes I make adjustments to show something more clearly. The photo is a guideline, not perfection. (Not that my tracing is perfection either, but it doesn’t have to be!) 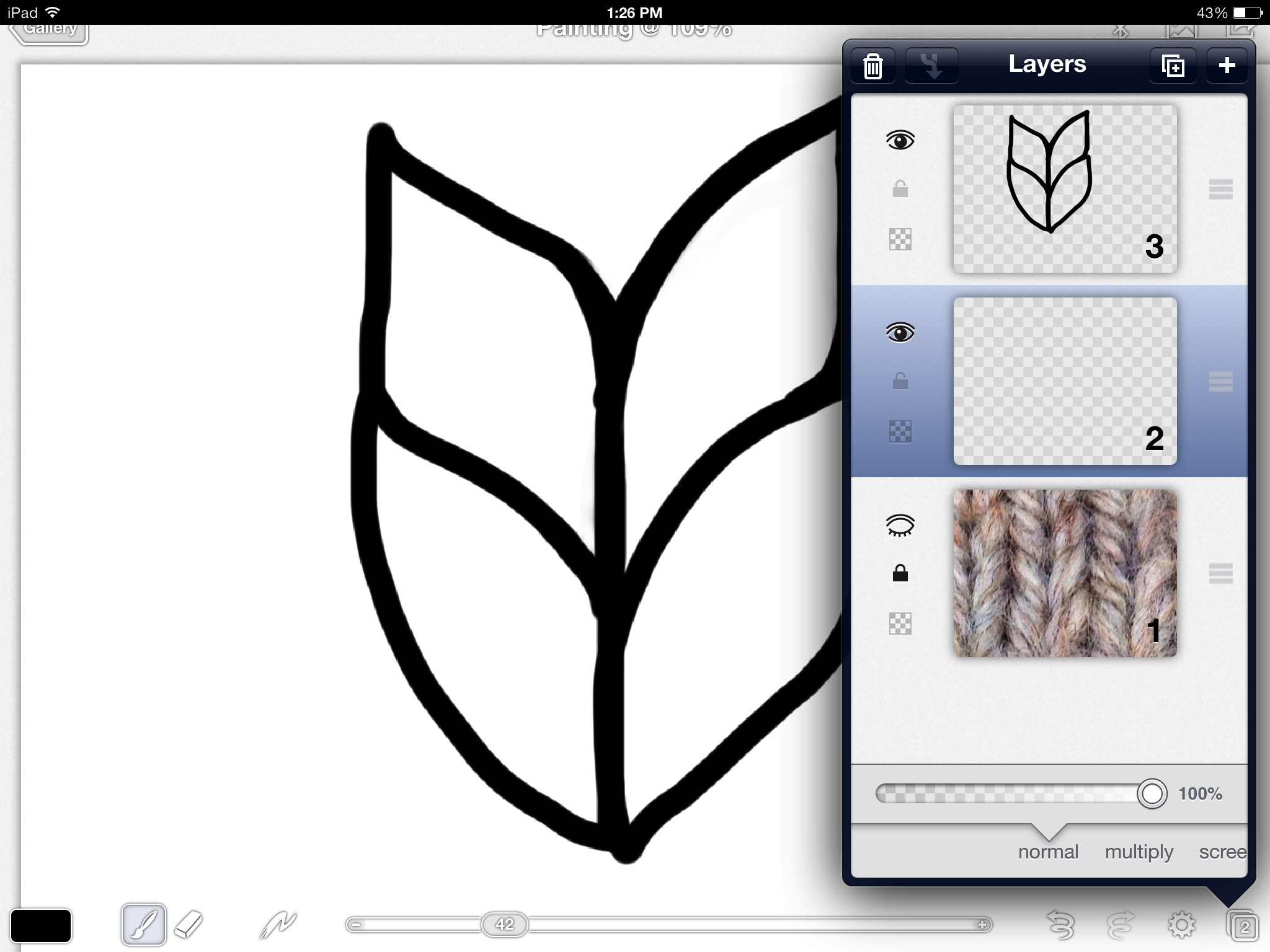 All right, now it’s time to add some color. If I were using Sketchbook Express, I’d use the paint bucket to fill in the outlines, and then use the marker tool to fill in any gaps.

I tend to prefer my results from Brushes, however, and since it doesn’t have a paint bucket, I’ve got an alternative method: add in another layer. I open my layer window up, add a new layer, and put it so it’s under the outline layer and above the photo layer.

Now I change my brush color and make it much larger. Then I start coloring in the spaces, just as if this were a coloring book. 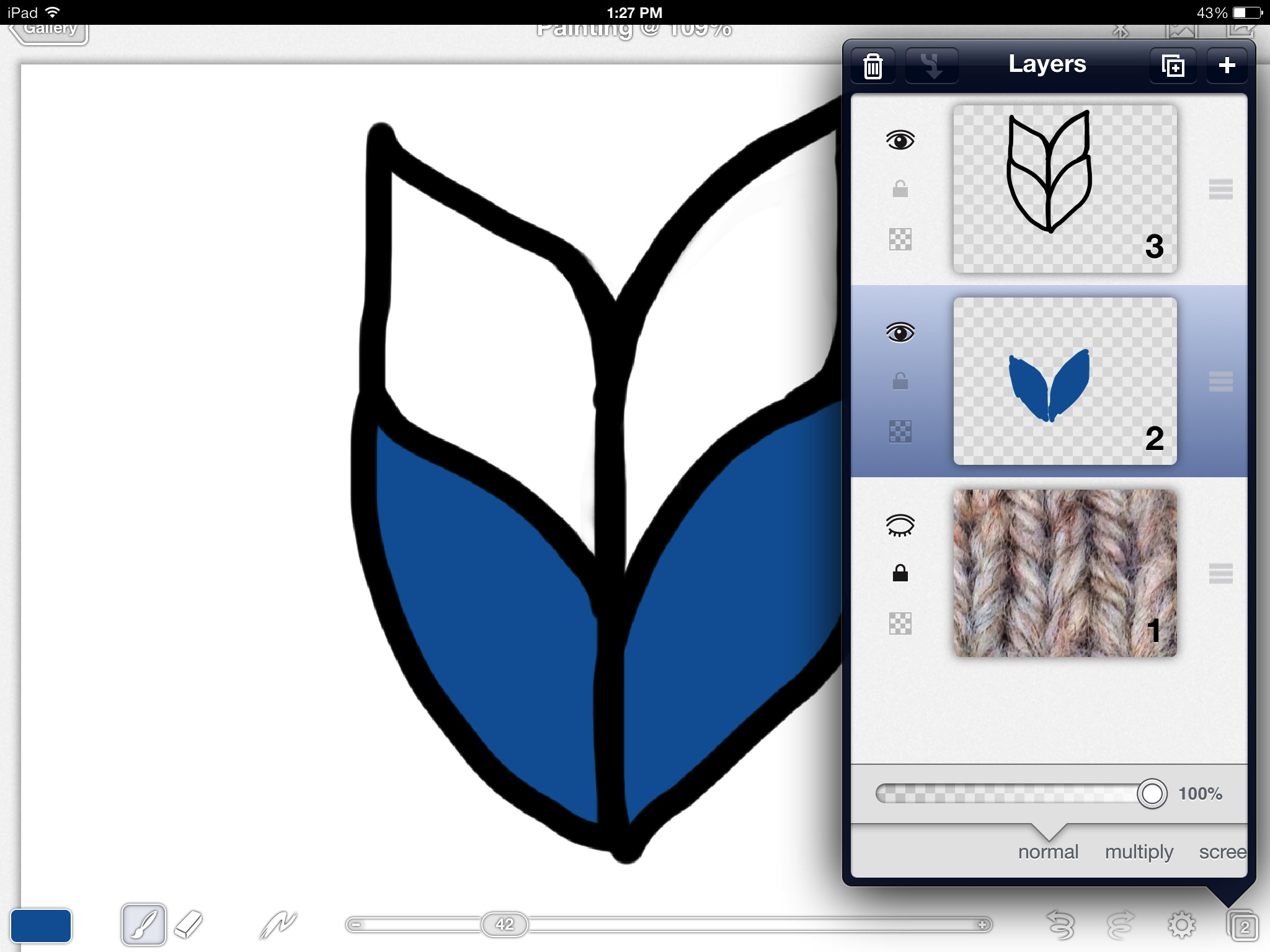 You can see that more clearly if you click the screenshot above; the edges of the blue part are blotchy and wiggly, but hidden by the black outlines. 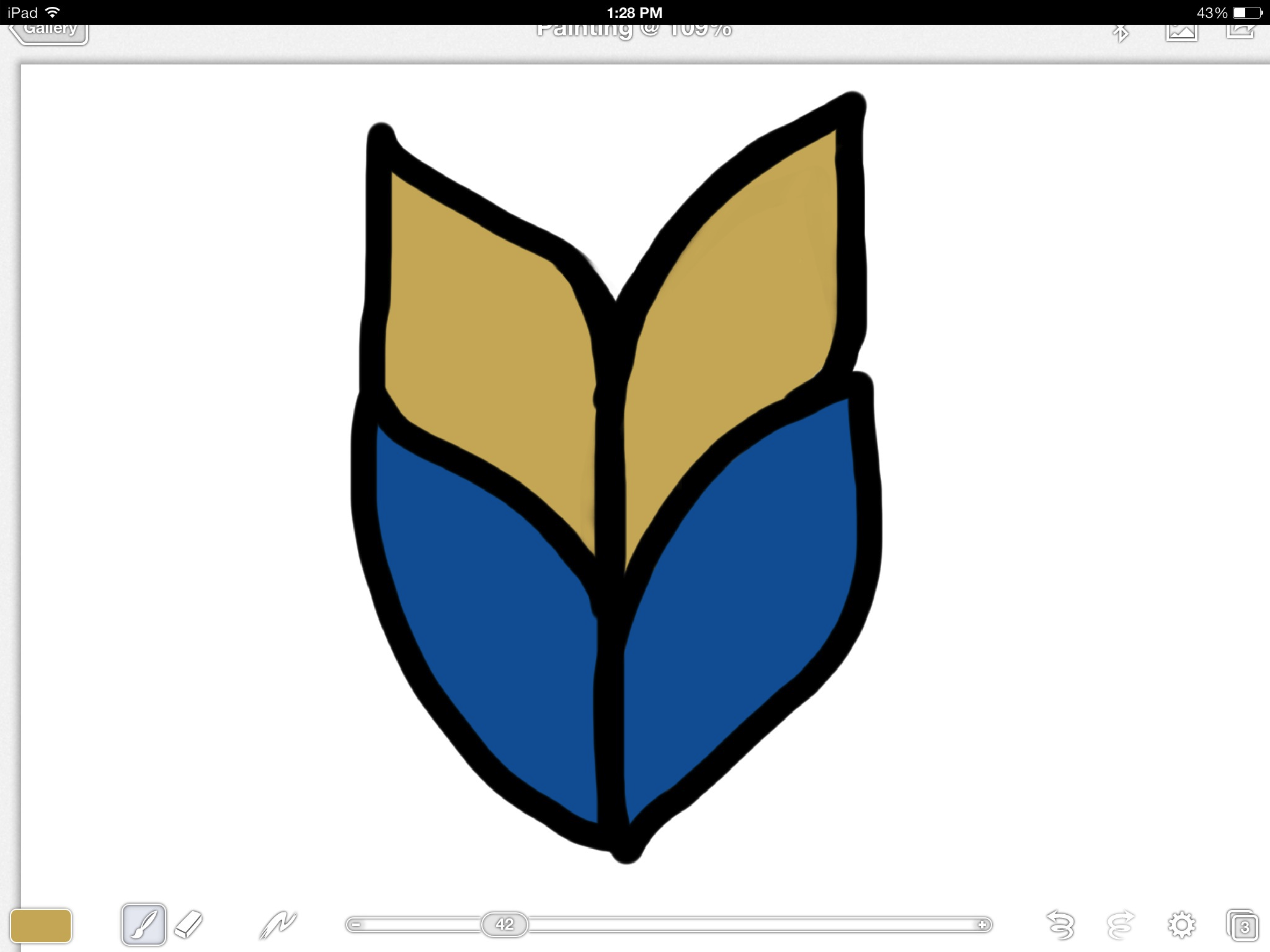 I usually make each row of stitches a different color to help highlight what’s going on.

And there you have it. Once that’s done, you can export the PNG file (recommended for pictures with large solid blocks of color) and do what you will with it.

Next time: the complications introduced by illustrating needles and hooks.