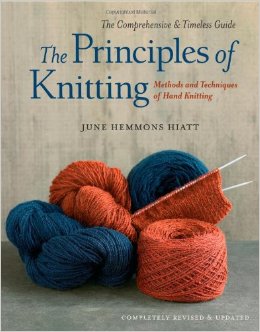 I have some knitting books. Not nearly as many as some designers I know (I like to rely on the public library), but still, about fifteen knitting books.  Almost none of them are pattern books; instead they fall into two categories:

1. Stitch dictionaries. I never met a stitch dictionary I didn’t want. Mind you, I have one that is more in the nature of a horrible warning instead of a good example – but I’ve still found some stitch motifs in it that I haven’t seen elsewhere. (Let me just say that some of the photographs don’t even show a full repeat of the stitch pattern.)

I’ve also browsed a number of books from libraries and ordered others through interlibrary loan. It’s a great way to pick up techniques.

A classic in the field was republished in a much revised version a couple of years ago: June Hemmons Hiatt’s The Principles of Knitting. I bought it as an ebook, and it’s been languishing on my tablet ever since. (I’ve learned my lesson: reference books only work for me in paper, especially if they’re as long as this.)

So I checked the hardback out of the library recently and have been browsing it with great delight. One difficulty, however, is that Hiatt uses wonderfully internally consistent and logical terminology for knitting techniques that doesn’t necessarily match up with the names used by anyone else. (She has good reason to do this – she says herself that for some things, there’s already great variation in terms, so if she has to pick something, she might as well pick something that makes more sense.) If one is only using Principles of Knitting, this doesn’t matter. But it makes it very hard to look for techniques in the index to see what she says about them.

Take knitweaving, which I wrote about last week. It wasn’t in the index and I didn’t have the slightest notion of what she might have named it. I didn’t find it when flipping through the pages. (There are 700 pages; it’s easy to miss things.)

It turns out that she calls it inlay and has a very thorough chapter describing both kinds of knitweaving/inlay, its advantages and drawbacks, and discussing how to use it functionally as well as decoratively.

Anyway, I would definitely recommend the book to anyone with the caveat that cross-referencing with other work is difficult.

PS. I think I’d qualify it as my desert island knitting book. You know: if I could have just one knitting book, what would it be? This is it.

6 thoughts on “Hiatt’s Principles of Knitting”