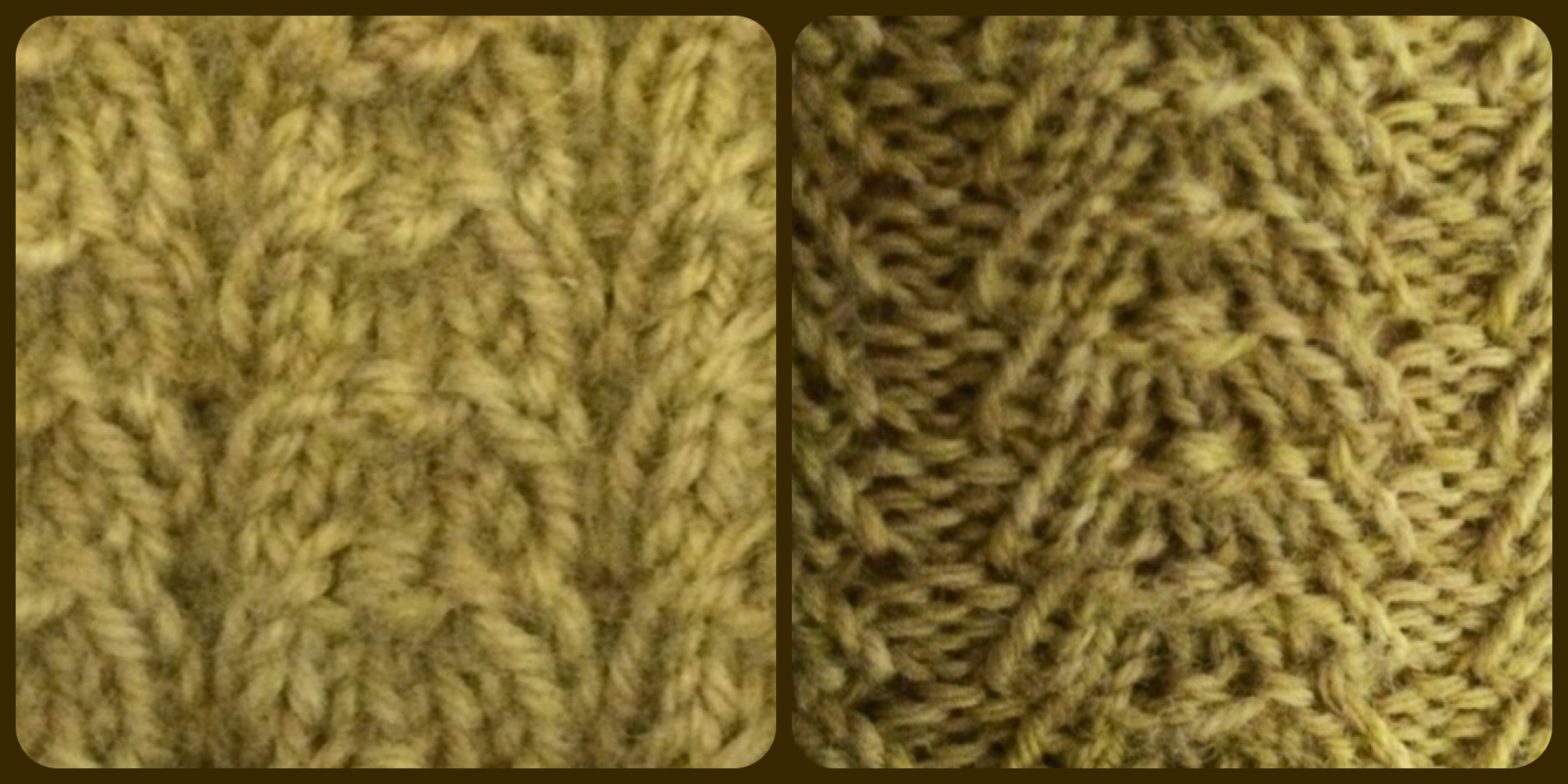 I’m knitting myself some socks. I’m not going to write up the pattern for these (there are already a bajillion things in the queue to be written) but I thought I’d share my process for plugging a stitch pattern into a basic sock design.

These are toe up socks because, well, because. Sometimes there are specific reasons for this and sometimes not.

I went through my favorite stitch dictionary (Mon Tricot 900 Stitches Patterns) and hit upon a stitch I’ve been wanting to use for a while: Braid Stitch. 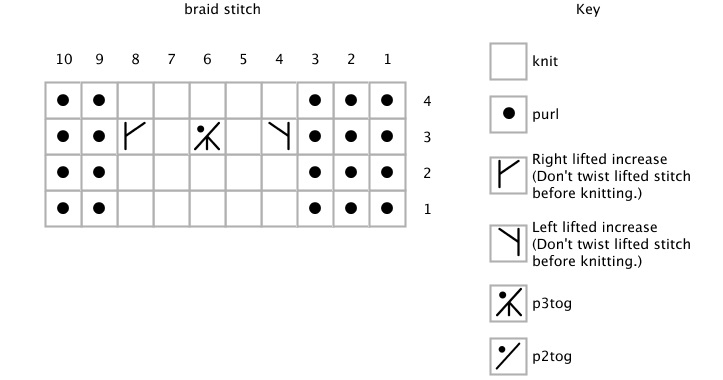 It’s essentially a rib stitch. The original in the book is a ten stitch repeat; that is, the pattern will start over again after every ten stitches. The pattern rib shown is five stitches, and then there’s five stitches of purl.

I’m fine with purl, but ten stitches can be less flexible to work with – if 60 stitches isn’t the right size for a sock, then you have to drop down to 50 or round up to 70. Also, I didn’t care so much for the blank areas in the pattern in this particular case. The advantage of this kind of ribbing is that it’s easy to adjust the repeat.

I looked at the lifted increases that are pulled out of the purl section and felt that it would be better to have at least two purl stitches in the receding ribs; I usually don’t care for lifting two increases from one stitch. 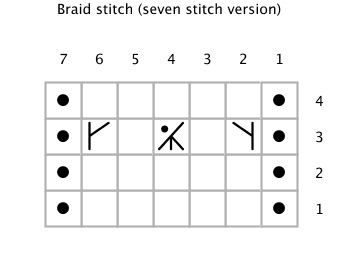 (Sometimes when I knit toe-up socks, I don’t pick my stitch pattern until after I work the toe; then I fudge and increase one stitch in the center front of the toe if it’s needed.)

When I got to the top of the toe I had 29 stitches on the instep and 29 on the sole.

But you’re working in the round! Technically true, but the instep of a sock is kind of like working flat, in that the right edge of the pattern isn’t going to touch the left edge; there’s a lot of plain stockinette in between.

What about when you get to the cuff? Wait and see – there are tricks to be played in the gusset.

So, 29 divided by 7 is 4 with a remainder of 1. That’s four repeats and an extra stitch. Here’s how that charts out if I put all the repeats in the chart:

But I wanted to center a pattern rib, didn’t I? Yes. So I shifted everything over by half:

That’s looking a lot better, right down to making the extra stitch fit in, but there’s still one more problem.

I’ve circled the decrease that goes with each increase. Purl 3 together is a double decrease, meaning it takes away two stitches.

See those purl 3 togethers at each edge? They decrease one stitch too many at each side. But I can’t turn them into knit stitches unless I also convert the corresponding increases into knit stitches. Otherwise, the corresponding increases will make the sock grow every fourth round and mess things up. But they can become purl 2 togethers at the edges.

Now I knit my way up to where I start making the gusset. I’m not going into the details of the gusset structure, but here’s where to adjust things so the ribbing will repeat tidily around the cuff.

Seven doesn’t divide evenly into 58. The nearest numbers it does divide into are 56 and 63. 56 would make too tight a cuff (this is fairly stiff ribbing as ribbing goes), but 63 sounds good. 63 – 58 = 5, so I added two extra gusset rows, adding four more stitches. I didn’t decrease these away when I worked the heel. I also increased one stitch in the heel, making five extra stitches added in. Therefore when I started the cuff, I had nine repeats of my stitch pattern.

(apologies for editing; WP lost some of my changes and images somewhere along the way.)