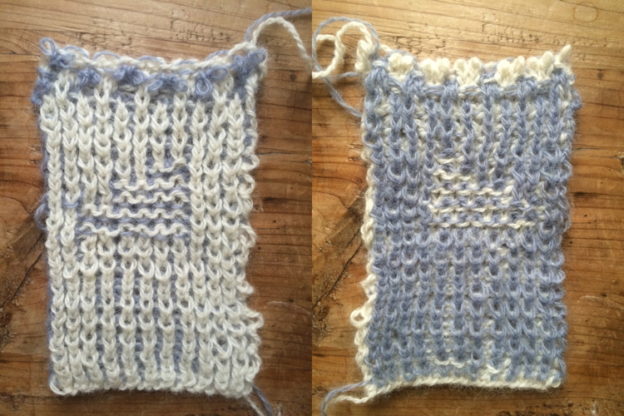 I picked this up at the library because Twigg stitch is billed as being a brand new knitting stitch method. It might well be – that is, I haven’t seen it in any of the books I’ve read, and certainly people are constantly reinventing techniques that other people came up with separately. Anyway, if anyone else has invented it, those instances are pretty obscure.

I had a good time playing with a tiny swatch, though I’m still not very good at the technique. (If I go on with it, practice will help a lot.) 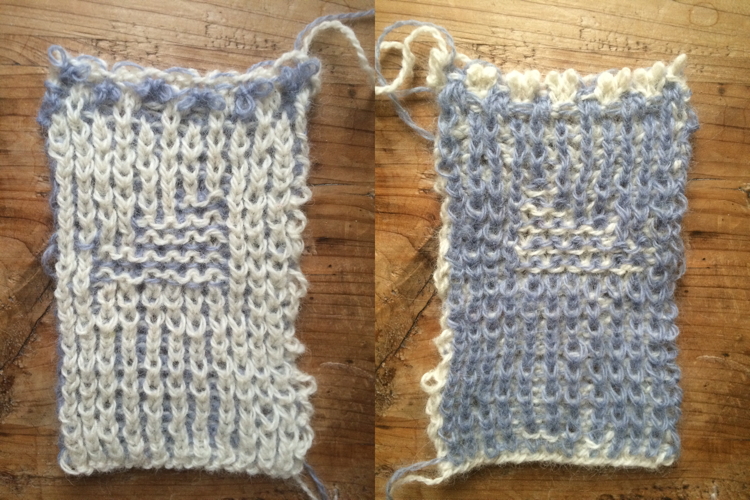 I’m still working on getting even tension. At first I held one yarn in each hand, but the instructions warn that this usually makes for uneven tension. Still, it helped me understand the structure of the stitch. When I moved to holding both yarns in one hand, keeping even tension was much easier, though I’m still not really practiced with the stitch.

(I tried out one of the suggested stitch pattern options in the middle, as you can see – combining Twigg stitch with garter stitch.)

On first glance, the method is very similar to double knit, but it’s not the same. With double knit, care is taken to keep the two sides as separate pieces of fabric, except as necessary when doing reversible colorwork. With Twigg stitch, the two yarns that are used are twisted between stitches to make a kind of reversible ribbing. (Reversible in that the near side of the ribbing shows one yarn, and the far side shows the other, except when special patterning is worked.)

On second glance, the fabric is reminiscent of two-color brioche stitch, what with the vertical stripes and the way they look when cabled, but it’s not actually brioche. For one thing, where it takes two passes to work a row of brioche, both colors are worked in one row of Twigg stitch. For another, where brioche is loose and fluffy, Twigg stitch feels and acts more like ribbing.

If you are familiar with working in ends as you go in stranded knitting, this is the technique that Twigg stitch most resembles.

I find the technique interesting, and am also pleased to report that Vicki Twigg didn’t just rest on her laurels after inventing the method, but also spent a good deal of time coming up with a few dozen textured stitch patterns for a mini-stitch dictionary. I find these stitch patterns rather more interesting than the finished patterns in the book. (I’m sad to say that most of them aren’t much to my taste, but that kind of thing is so personal).

The instructions in the book are good. I’d recommend this for someone who’s already familiar with knitting basics.