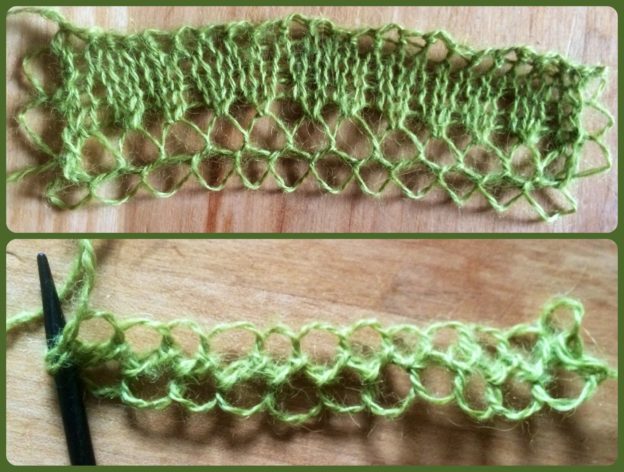 In Knitting in the Nordic Tradition, Vibeke Lind describes what she calls “lace casting on”. This is a length of the narrowest possible one-row lace edging, with loops along each edge. Stitches can be picked up and knit in the loops as a starting point for knitting, particularly lace. It might make a good center for a rectangular stole worked from the center to each end, or perhaps for a rectangle worked in the round from the center outward? 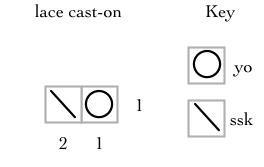 Cast on 2 stitches. Yarn over at the beginning of the needle, and work a left-leaning decrease: either (slip 1, knit 1, pass slipped stitch over) or (slip 1 knitwise, slip 1 knitwise, and knit together through the back loop).

When it’s long enough, the last row worked should be to knit the 2 stitches together, and then pick up and knit through the loops of one edge. Lind doesn’t say how many stitches to pick up in each loop. I suppose the implication is that it’s one stitch per loop, but the size of the loops in this case led me to try a variation: (pick up and knit 1 stitch in a loop, yarn over); repeat as desired. Two other ways to get two stitches per loop: knit in the front and the back and (knit 1, purl 1) in the same stitch.

June Hemmons Hiatt calls this an eyelet cast-on border in her Principles of Knitting. She suggests working it with a smaller needle than usual, which seems appropriate if working one stitch per edge loop.

Montse Stanley has something very similar called faggot cord in her Knitter’s Handbook, except for two things: she doesn’t list it as a cast-on, but only as trim (it would make fine trim sewn onto a sewn wool jacket, for instance); and she works it as (yarn over, purl 2 together).

More experienced lace knitters might have noticed that this is the narrowest possible instance of faggoting, which is a technical term referring to lace that consists entirely of decreases and yarn overs on every row, with no other stitches. This sounds more difficult than it truly is – faggoting is actually one of the first kinds of lace I tried because it’s easy to memorize.