Figuring out how to make the diamonds that tile nicely for a crescent shawl has felt rather like trying to drink from a firehose in regards to filling up my head with ideas. The method in question isn’t only of use for secret code, of course, and I’ve been playing around with some other ways to use it.

(I’m only including text instructions for the stitch design in the featured photo. It’s really a post about how to play with designing using charts, and the text was going to make it too long. Speak up in comments if you want text to go with the others of these, and I’ll post separately.)

The first attempt was to insert a complete motif from another stitch pattern in the middle section of a diamond. I decided to revisit Buttercup, though I decided not to swatch it. It looks as if it should work nicely, though: 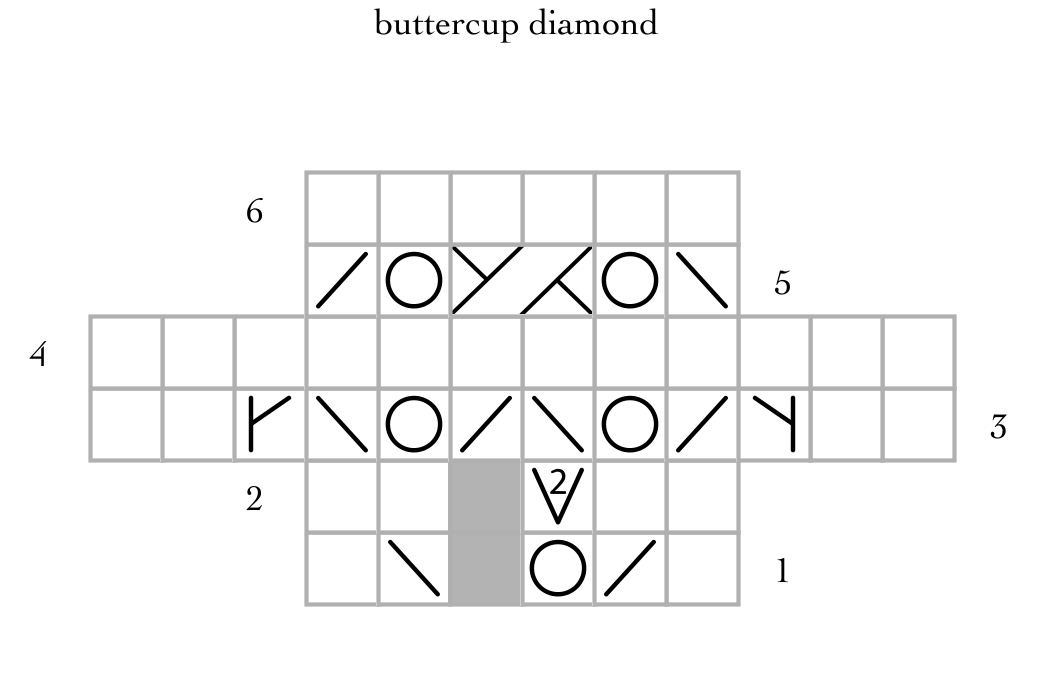 So, a small motif with a blank space around it is pretty easy to transfer to one of these diamonds. What about an allover sort of pattern?

Then I tried tiling the resulting diamond, because I knew that the layout would change where the stitches were in relation to each other. This one was a mild disappointment; it might well work, but I think it would be a subtle pattern change and I’m not sure I find it interesting enough to work with.  Still, it points out where some of the changes happen.

One possibility, though, would be to alternate it with plain stockinette diamonds. Or maybe a different design in the alternating diamonds?

For my last attempt this week, I decided to try taking an excerpt from a more traditional pattern, Fishtail. I didn’t expect the end result to look much like the original; in fact, that’s part of the point.

This is one of the variants I’ve seen in more than one place, in this case borrowed from my Mon Tricot stitch dictionary. I’ve shown two full repeats of the pattern as written, because the part that interested me was the wedge of yarnovers in the middle. 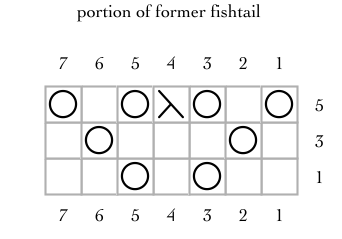 Except I still haven’t worked out a diamond with an odd number of stitches, though I have some glimmerings in the back of my head – hm, I suppose there’s one more post coming as a result of this! 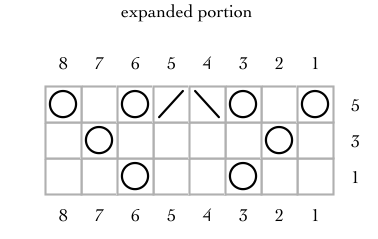 Anyway, I expanded that central column to two columns.

Then I placed it on a diamond, in rows 3-7, because I needed a diamond with a space big enough to place the decreases outside the wedge of yarnovers. Then I added yarnovers in logical places above and below, and stuck in decreases to account for each yarnover. (Most of the decreases are in obvious locations that have nothing to do with the original stitch pattern.)

Tiling and swatching showed me that I needed to add two more yarnovers and corresponding decreases on row 3 of the diamond to make an interesting allover design.

I hope I’ve shown enough of my thought processes to give some of you some ideas for how to make your own flattened diamond stitch patterns. Please let me know if I’ve been unclear!

This is how the allover pattern looks; it’s only a little like the original fishtail, isn’t it? – NOTE (July 2017): this chart is wrong, and so I have removed  the instructions. I will be replacing them at some point.