A while ago I was trying to improvise knitted netting, and was only half successful. (I’m still quite happy about even that level of success.) I’d been thinking for a while of trying out the decreases I’d improvised there for use in regular knitting, and this week’s post is about the resulting swatch. 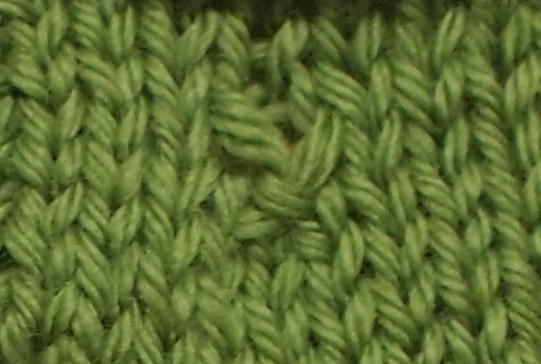 I am reluctant to call this effort a failure even though I won’t be using these decreases for plain knitting: too many people think failure is bad and a waste of time. But I don’t think this experiment was a waste of my time: I’ve learned that the decreases won’t work for this purpose, I know why, and now I won’t waste any more time wondering about it. I learn from failure. Mistakes are a good thing, especially when it’s just a swatch experiment.

The nifty thing about these decreases is that they sit horizontally because a stitch or stitches from the previous row is passed over a single stitch before that stitch is worked. This is what makes the decreases sit flat in a way that works quite well for the netting.

The other thing that’s good about them for  netting is that some of the yarn in the stitch that is passed over slides into the stitch that’s worked. This is how the open spaces end up so square –  the stitches between spaces get taller. The problem is that it makes the stitch worked at the decrease point in regular knitting loose and floppy – not even as tidy as a slipped stitch.

I hope to inspire people to be more willing to swatch, experiment, and be willing to make mistakes. Have fun!