Picots are used in lots of crafts – I’ve made them in knitting, crochet, and tatting, and I know they exist in bobbin lace. They must be part of many kinds of needlework. In tatting, crochet, and bobbin lace, at least, they serve both a decorative and a structural purpose, being a decorative loop applied to the very edge of the work that can also serve as an attachment point for other parts of the work. Picot cast-ons and bind-offs in knitting are generally decorative; the only functional aspect that I’ve seen most people use them for being to help make the edge stretchier. They are also attached to the very edge of the work. So far as I can tell, knitted picot hems are called picots because they make a jagged edge; they seem more of a cousin to all the other picots. They do have loops, but their loopishness isn’t generally visible. Still, they’re worth mentioning here.

I will have more to say about picot bind-offs in a future post. (Indeed, you might be surprised by how much there is to say about knitted picots.) The rest of this post is about the inside-out picot, developed by certain nimble knitters (Ravelry link). It’s an alternate way to make a little loop at the edge, centered over a single stitch, without having to cast on extra stitches during the bind off.

(My way to center a picot over a single stitch is still a good one in my opinion; I just like having more than one possibility.)

The knitters of Nim Teasdale’s Ravelry group, Nimble Knits, have come up with another nifty knitting trick, and this time, each of the people involved is trying to give the credit to someone else. So I’ll give the credit to all of them. Truthfully, that’s often how things work: one person does something and it sparks an idea for someone else, and then a third person thinks up extra ways that it’s useful…

The major difference from a regular knitted picot is that the inside-out picot is added to the last pattern row before the bind-off. The picot loop is thus inside the bound off edge instead of outside; hence the name. 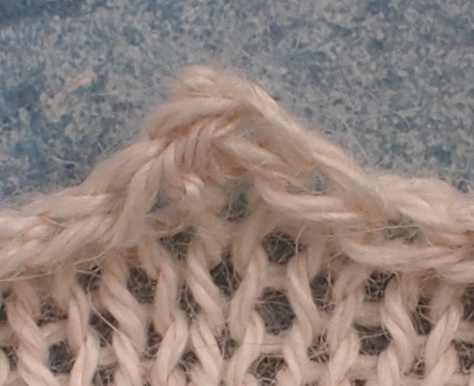 Here’s how it works:

I like both kinds of picot very much, and I’m going to have fun playing with this new one!