My first post on what I’m starting to think of as hex lace (though I’m sure someone has a different name for it already – anyone know?) was my first exuberant foray into writing about it, but I’ve been thinking about it more, and there’s more factors to consider than I wrote about at first try.

Since each cell of these hexagons takes up four stitches and four rows, the scale of pictures made from them is going to be pretty large. It’s no wonder Niebling and Kinzel’s lace designs using it as a background tend to be big.

What counts as a row? 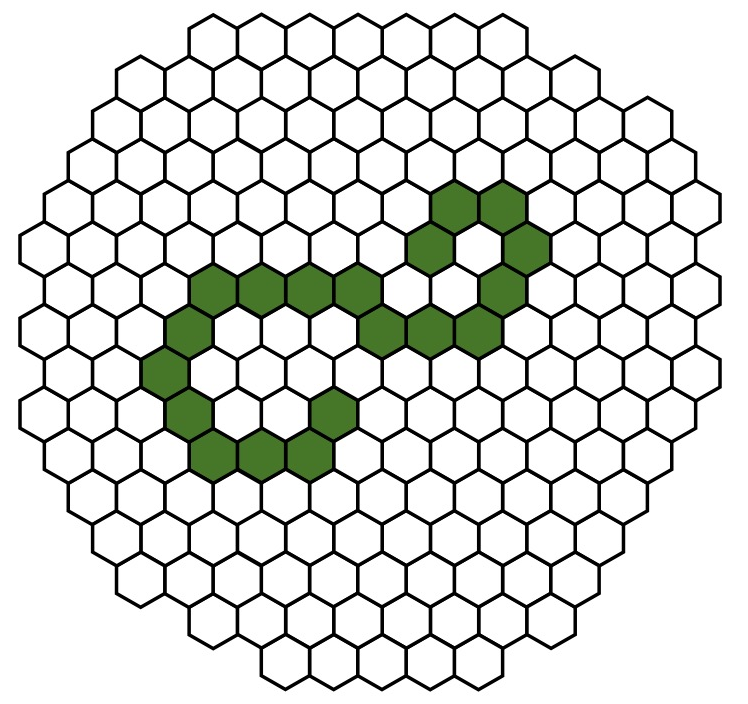 When looking at a hexagon chart like this, it’s necessary to figure out how to interpret it as rows if it’s going to be converted to knitting. 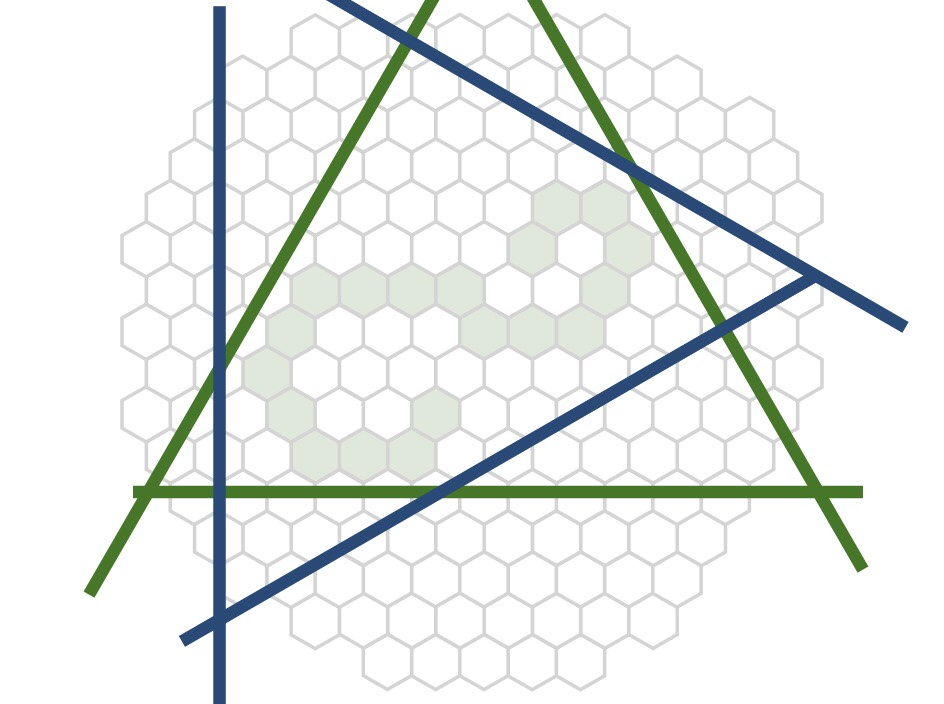 There are six directions that could be interpreted as rows. Each of the lines shown here might be a starting point for the first row; I would then go row by row across the drawing to turn it into a chart. 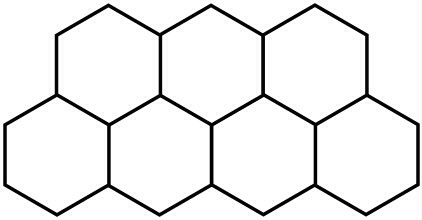 Three of them end up with the hexagon rows alternating like this. I’ll call this Alternation A. This orientation has zigzag lines going from side to side, with each cell in a row separated by vertical lines.

The other three end up with the rows alternating like this. I’ll call this one Alternation B. In this case, none of the cells in a row touch each other directly. They are pushed aside by the next row of hexagons, though there is a horizontal line connecting them.

So which alternation is used by honeycomb mesh?

Here’s a look at a swatch with the cast-on edge at the bottom and the selvedges at the sides. This is Alternation B. (I was forced to consider this because I’m working out a somewhat more complicated design for sale, and looking at it from the wrong angle caused me problems.)

That means that there are three ways I can approach this squiggle; all will produce a shape that is similar to my original sketch, though each one would be approached from a different angle.

Therefore, I need to look at rows like this; each cell with a 1 is in the same row. All the 2s are another row, and so on.

How to convert to knitting?

Each hexagon is either a open lace cell or a closed stockinette cell. It is formed over four rows, but the knitter only needs to be concerned with the bottom two rows of knitting when turning the hex chart into a knitting chart (or directly into knitting). The top half of each cell will take care of itself on the next row, when working the bottom halves of the next row of hexagons.

Here’s how that works. 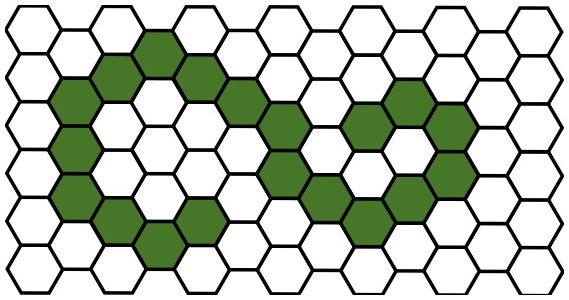 Start with the bottom row of this hex chart. I’m going to work from right to left. I’m arbitrarily going to say that the light cells will be open lace and the dark cells will be stockinette. (It can be reversed, of course, but consistency helps.) This means that each light cell will be worked as (k2tog, yo x 2, ssk) on the first row and (p1, k1, p2) on the second row. Each dark cell will be k4 on the first row and p4 on the second.

The chart for the first three lines of hexagons.

It looks pretty strange, doesn’t it? While I can offset the hexagons from each other horizontally, I can’t really show the vertical offset. It all works out, though. Also, oops, I forgot to delete the extra rows at the top.

And here’s the resulting lace: 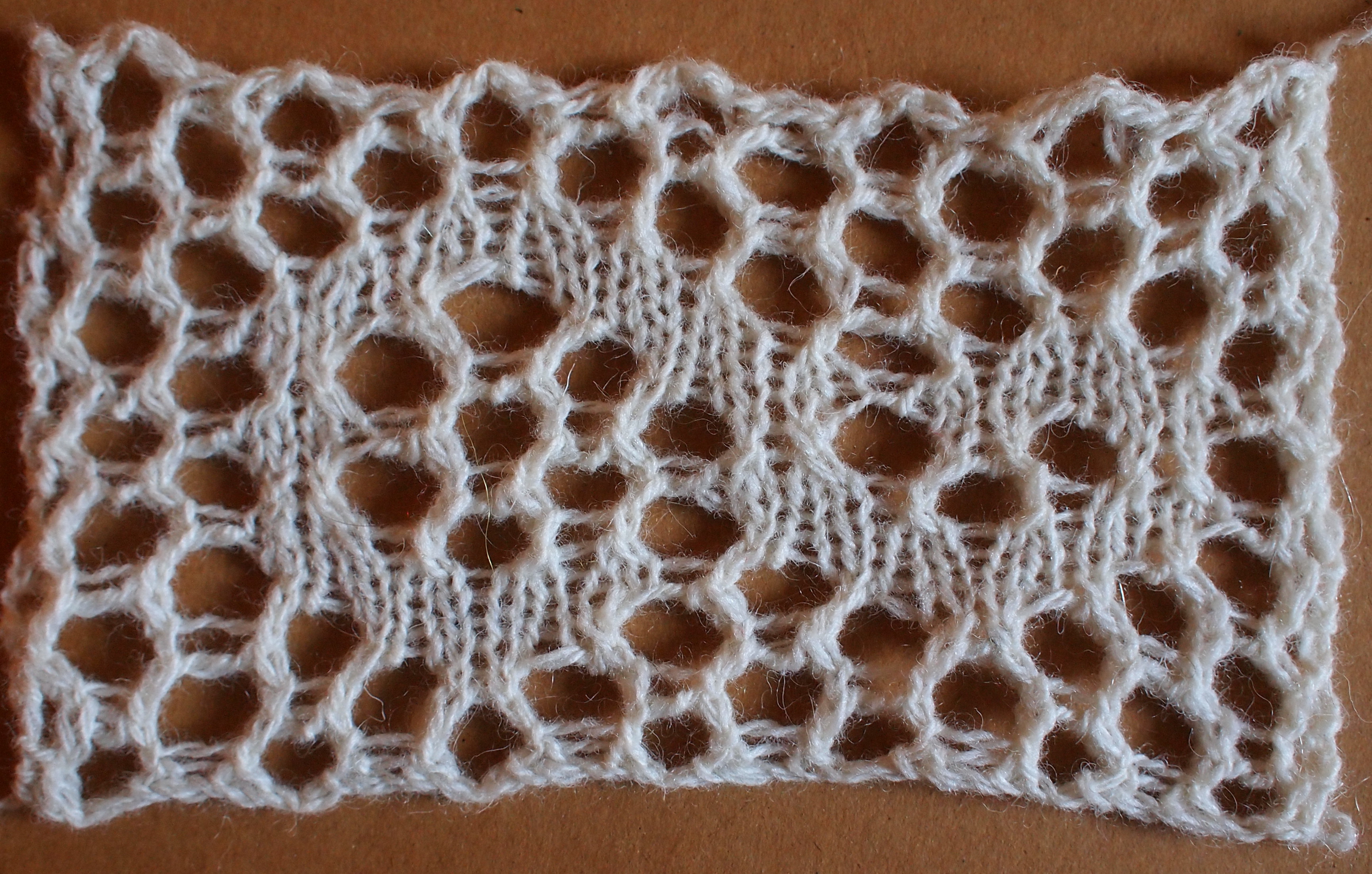 (This post is getting long enough that I’m leaving out the written instructions. If you want them, feel free to comment and I’ll put them up in a separate post.)

There are of course many ways of making a repeatable stitch pattern, but sometimes it’s easiest to have a simple starting point. Here are the two simplest ones I’ve found so far. They both have a shape where each row has the same number of hexagons.

This one is closer to being a normal rectangle.

Go forth and have fun!

2 thoughts on “More on hex lace”