I’ve been wanting to dye eggs with edible natural dyes for a while now, and this was the year that we got around to buying white eggs so we could try it.

The things we had around the house that I knew would work because people have been doing it for a while and have posted their pictures: beets and turmeric. Something I suspected would work because I’ve dyed yarn with it: black bean juice. 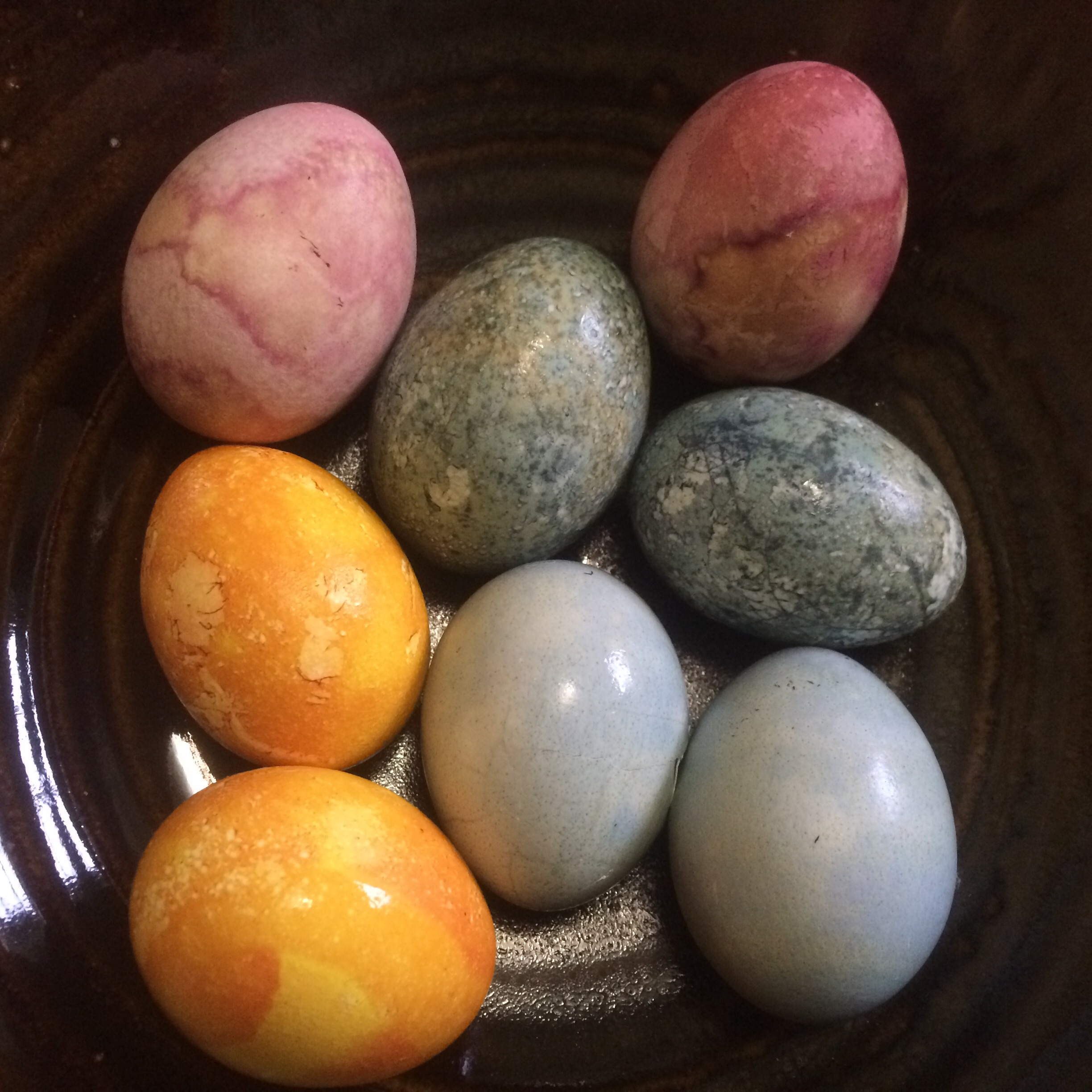 So I soaked some black beans before cooking them and saved the juice. I also cooked some chopped up beets and saved that juice. Finally, we didn’t have powdered turmeric, but there was some sliced frozen turmeric root (we are lucky in our farmer’s market), so my husband grated a bit of that and made a kind of tea from it.

I’d read that the food dyes should be mixed with vinegar – this set off my suspicions, though we mostly went with it. Food coloring needs it, yes, but it’s an acid dye. Natural dyes need other fixatives for fiber, called mordants, but those are mostly toxic.  The vinegar thing sounds like one of those things that “everyone knows”, but doesn’t have a basis in actuality. (For instance, many people think you can set dyes on cotton with vinegar – nope. But the reasons are outside the scope of this post.)

Furthermore, the black bean juice is an acid-base indicator – we had plans to dye the eggs and then paint them with vinegar and baking soda solutions to get multicolored eggs. And a friend sent me a link to evidence that this should work with the turmeric as well.

There was enough black bean juice to split it in half and still soak some eggs in it, so I put vinegar in one half and not in the other. There wasn’t enough beet juice for that, so we just put a blop of vinegar in that. My husband put vinegar in the turmeric mix as well.

These dyes are not like the artificial food coloring: the eggs need to sit in them for at least an hour, if not several hours.

Results: all the eggs in dye plus vinegar went beautifully blotchy. The non-vinegar bean juice produced a pale, smooth blue.

Painting with a baking soda solution didn’t change either the bean juice color or the turmeric one, which is frankly surprising. I even added more baking soda. Further experimentation is in order. Experiments require reproducible results, after all.

I suspect the beet juice and turmeric would have turned the eggs a smooth color without the vinegar, though we certainly liked the blotchiness. (My son calls the unevenly dyed ones dragon eggs.)