When I went to library school, one of my favorite classes was about the history of books and libraries. I thought it was fascinating, both in terms of the changing ways that information has been conveyed in text throughout history, and in terms of the kinds of physical objects that can be described by the word book. I also learned to be a reference librarian, which led me, in a moment of strange inspiration in the library stacks, to my techniques for turning words or library call numbers into knitting stitch patterns.

Learning about various ways of filling a page with words also influenced the patterns. For instance, the layout method I use most often for my encoded words was loosely inspired by the way that line breaks in some medieval manuscripts might come anywhere in the middle of the word, without benefit of hyphen or syllable boundary. And sometimes I toy with the idea of boustrophedon.

So as someone who combines words and knitting and who is interested in the history of books as physical objects, I am filled with glee by Karie Westermann‘s Kickstarter for a book that combines her academic background in the history of the book and her skill in designing knitting patterns. I’m pleased to report that the Kickstarter was completely funded within 25 hours. (It’s reached 135% of the original goal as of this post!) I gather that Karie has some stretch goals in the works since there’s been such tremendous interest. Keep an eye out! I hope you’ll join the people who’ve pledged  so far.

This Thing of Paper will contain ten knitting patterns based on imagery from old books, as well as essays about the history of books and the way that people’s access to information changed with the invention of the printing press. I want to hold this book in my hands. I hope you do too.

I’d like to thank Karie for including me in the blog tour to share her Kickstarter. It’s feeling a little like an online party, celebrating the community of people who think that this book should happen. Karie’s clearly thought hard about what’s involved in the complete process of running a Kickstarter and publishing a book.

The next post on this blog tour (lots of posts by interesting people are coming up) will be by Meg Roper at Mrs M’s Curiosity Cabinet. I hope you’ll visit her tomorrow – I’ve been reading some of her posts and think I’ll be adding the blog to my reading list: mending and making, bookbinding, thoughts about reuse and careful choices in clothing purchases… and yes, knitting.

Because I was so excited by all this, I couldn’t resist making a stitch pattern as a gift to my visitors. Naturally, I had to choose a word somehow related to books. I’ve always liked the sound of the word folio, and so here we are: one lace pattern and one chart for any craft. 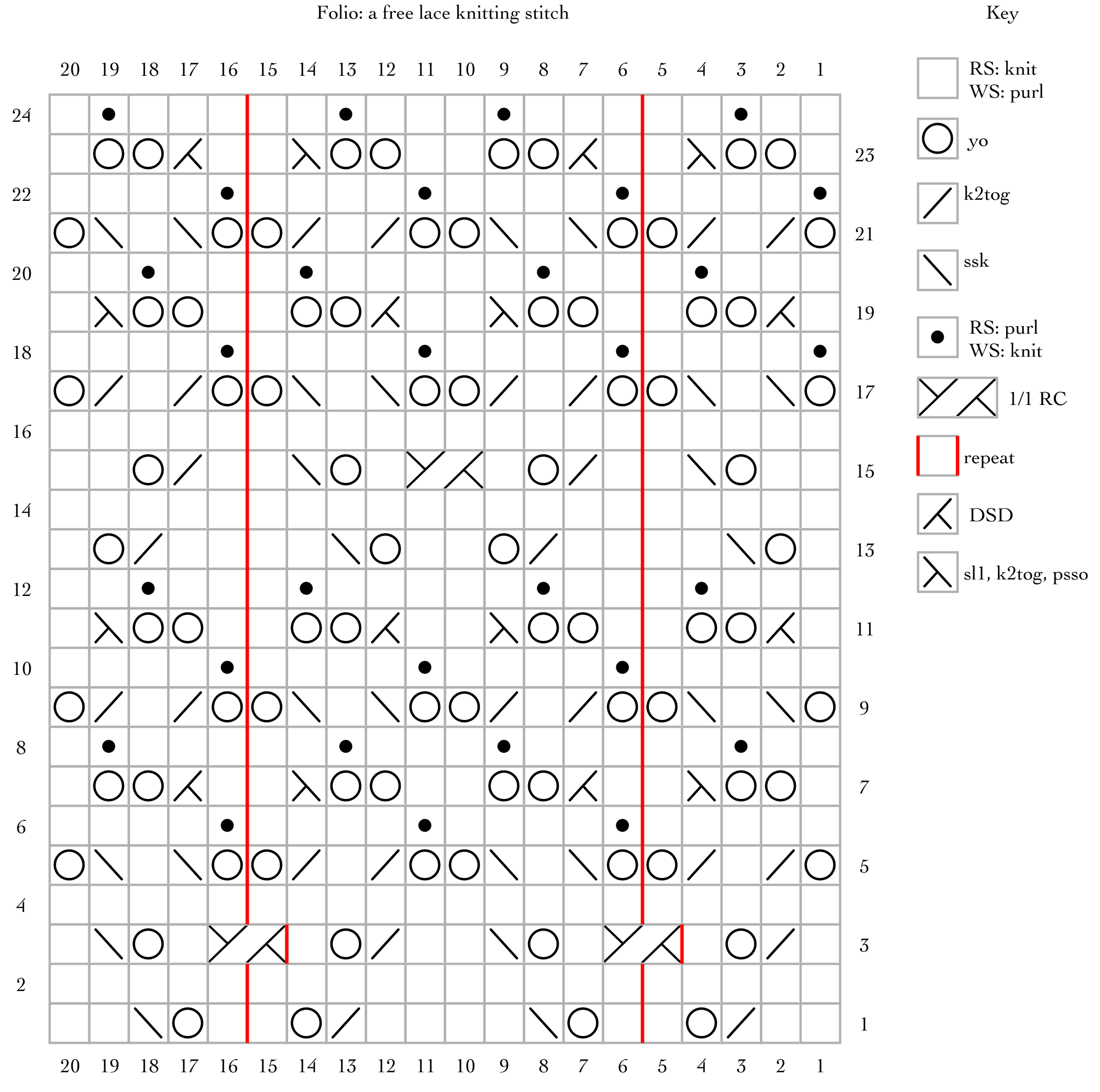 Designers, please feel free to use this stitch in your patterns. I’d like credit but won’t be offended if people don’t give it. Thanks!

errata:
rewrote wrong side rows to make it clearer how to work the double yarnovers. 16 May 2019.

Here is a chart that can be used for  knitting, cross stitch, or whatever craft you choose:

If knitting, try using this for colorwork, or replace all the black squares with purl stitches or slip stitches. There are many possibilities. 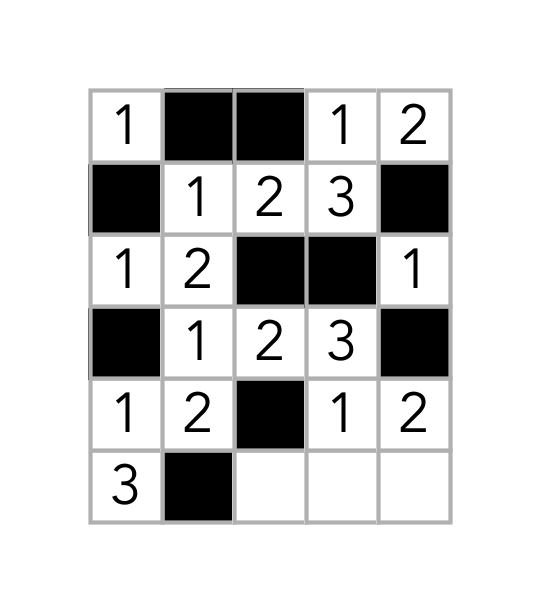 The first two digits are 10. I started in the top left corner, as if writing. I counted 1 square, and then marked the square to the right. Then I counted zero squares, and marked the next. (This is really the only way I’ve found to account for the numeral 0 with this layout method.) The next two digits are 23. I counted 2 squares, but then I ran out of spaces in the first line, so  I marked the first square of the next line, then counted 3 squares. I continued until I ran out of squares to mark in the size rectangle I had chosen. The last three squares aren’t part of the code, and don’t need to be considered by someone trying to decode this because there are no squares to the right of them. When done, I mirrored the whole thing along the edge of the leftmost column.

Once I had the squares arranged to my satisfaction, I replaced black squares with yarnovers, added alternating plain rows, and started swatching to figure out where to put decreases.

I did the same thing with a rectangle of different proportions to make the black and white chart for any kind of craft. I mirrored it along the center of the left-hand column so that the center column happens only once instead of twice.

6 thoughts on “This Thing of Paper (with bonus stitch pattern)”