I’m designing a pattern which needs a little simple lace in a multiple of 3 stitches at the beginning. I didn’t want a secret code lace. I wanted a multiple of 2, 4, 6, or 12 rows. In the end, I used simple diagonal lines because it flowed nicely with the other lace in the design. But I was struck by the scarcity of basic lace patterns in multiples of three in the places I was looking..

Suddenly it occurred to me that with only three stitches in a row, the most basic lace would have one knit stitch, one decrease, and one yarnover per row. This essentially makes for six permutations for a given row. (I simplified matters by pretending that all decreases are the same.) 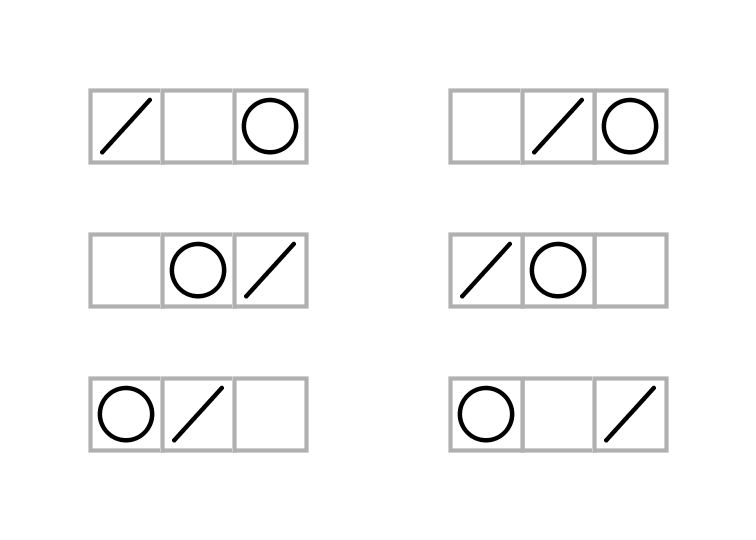 Mathematically speaking, this means that there ought to be 6 possible two-row lace patterns with these three stitches (including a plain alternating row), 36 possible four-row patterns, and 216 possible six-row lace patterns. Obviously they won’t all be nice, though fiddling with changing which way the decreases lean helps a lot.

Also, a fair percentage of these are essentially  duplicates. Compare this pair: 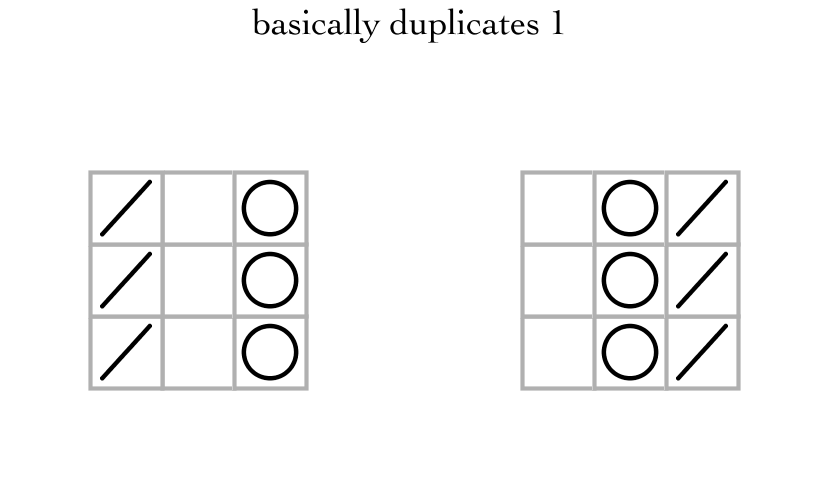 When repeated, the effect will be basically the same, as will this one (though it’s a different effect): 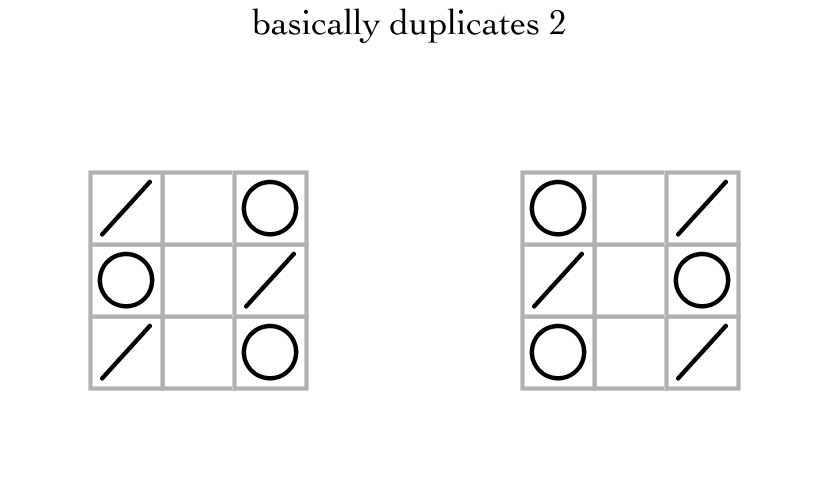 All four of these charts are part of the 216 permutations.

I didn’t feel like knitting all of them, but I thought it would be fun to generate a few stitch patterns using the six possible rows and a six-sided die. Maybe you’d like to try doing it too? I recommend reading through my process, though – there’s a structural concern I didn’t think of when I started this étude.

I decided to start with a six row pattern; this meant picking three lace rows at random. The dice gave me 4, 4, and 6. 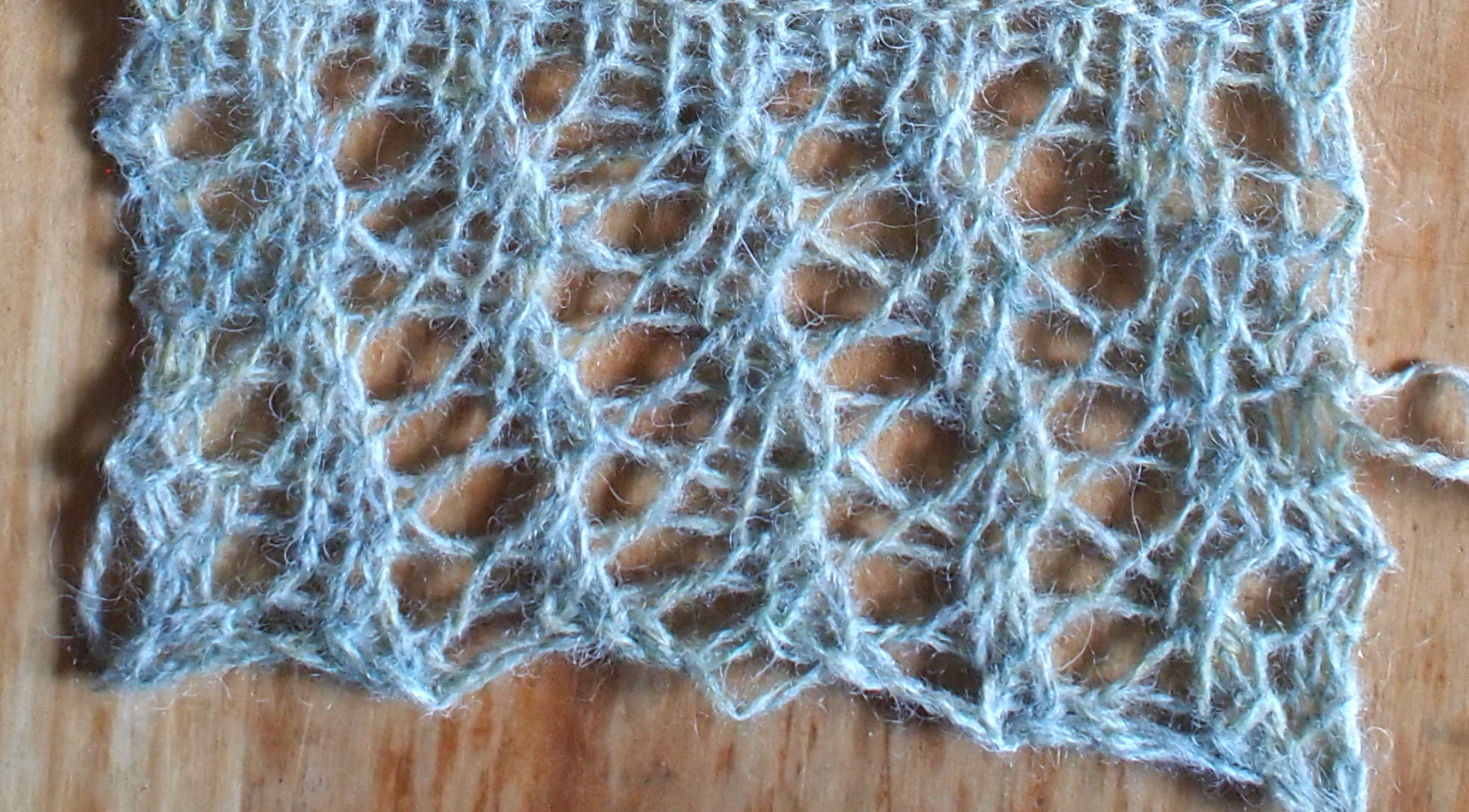 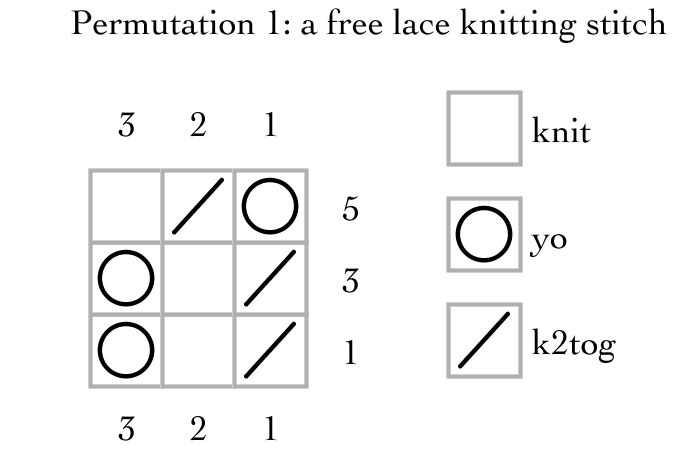 I decided to knit this stitch pattern from the text, omitting the wrong side rows. This makes this a six row pattern with the decreases and increases spaced in such a way to eliminate the bias. I like this a lot. 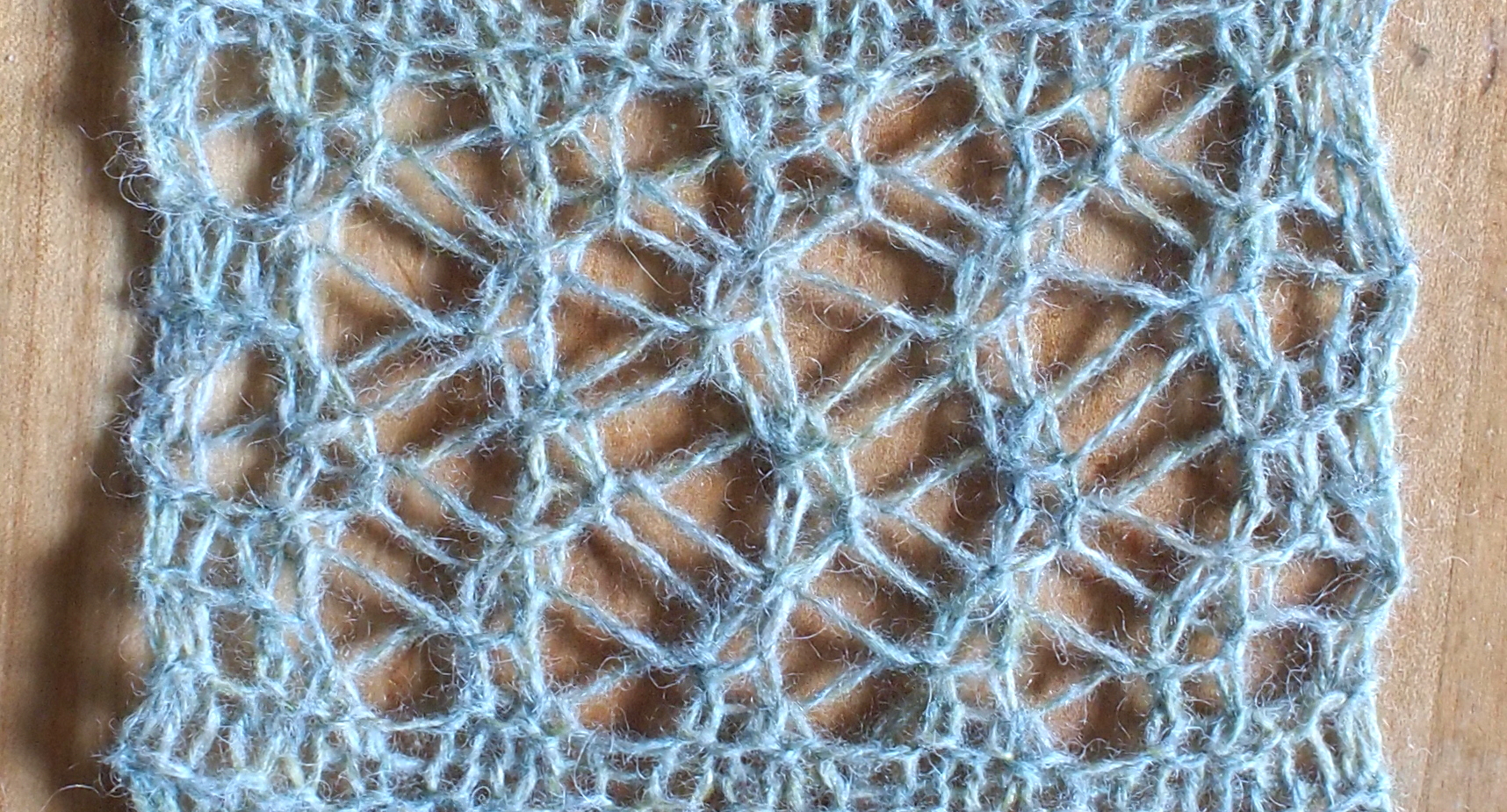 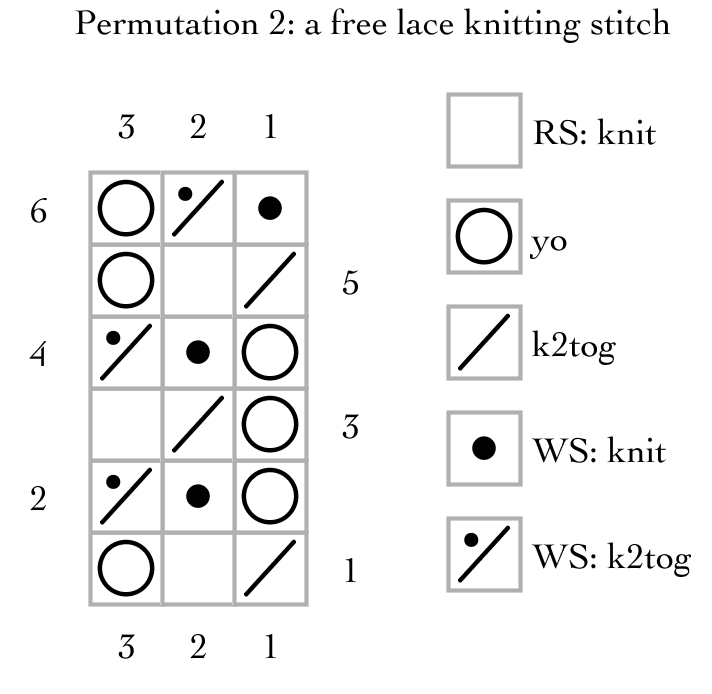 I realized that another way to make the first version stop biasing was to mirror it, even though it made it a six stitch repeat and added double yarnovers. 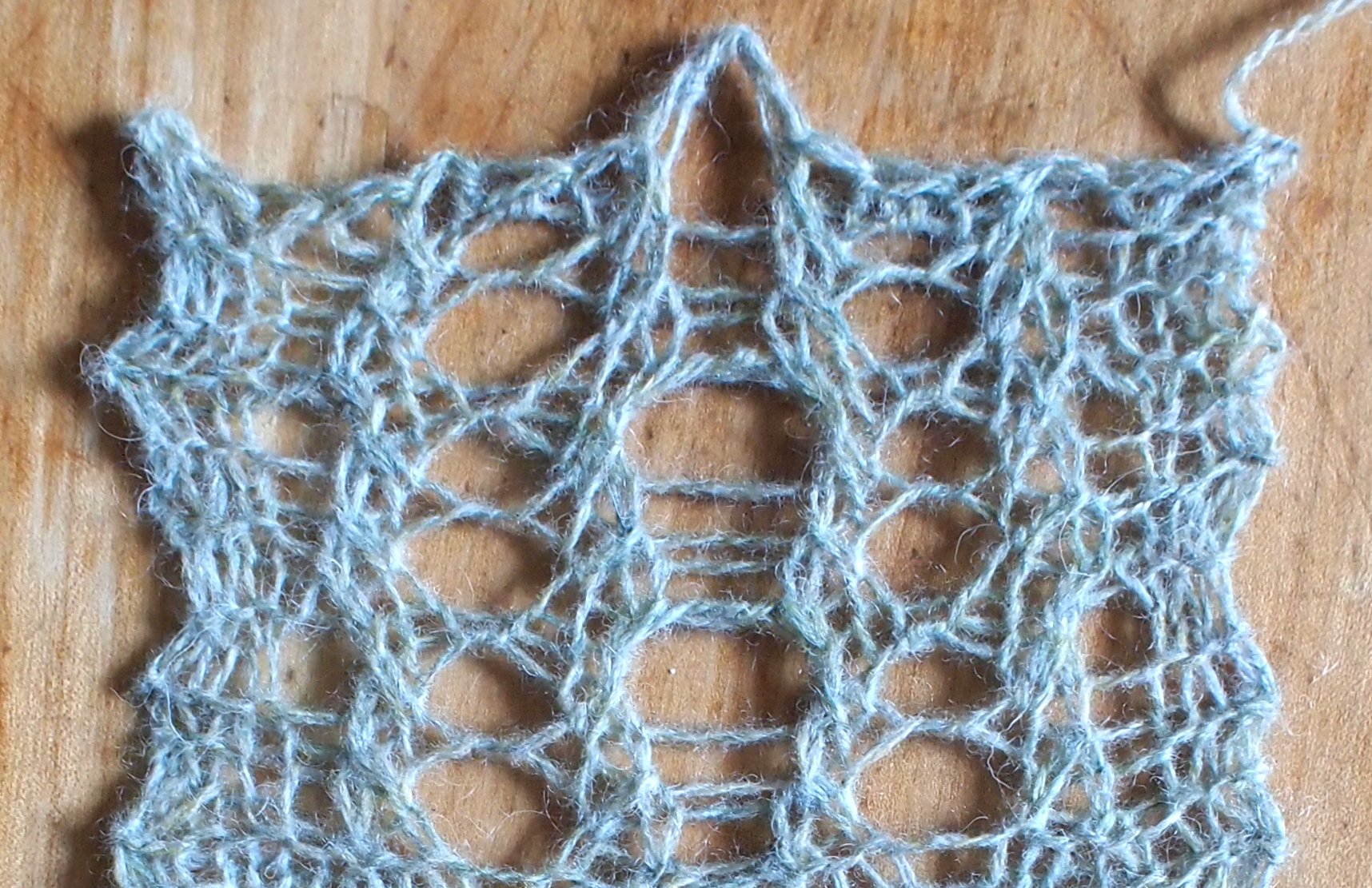 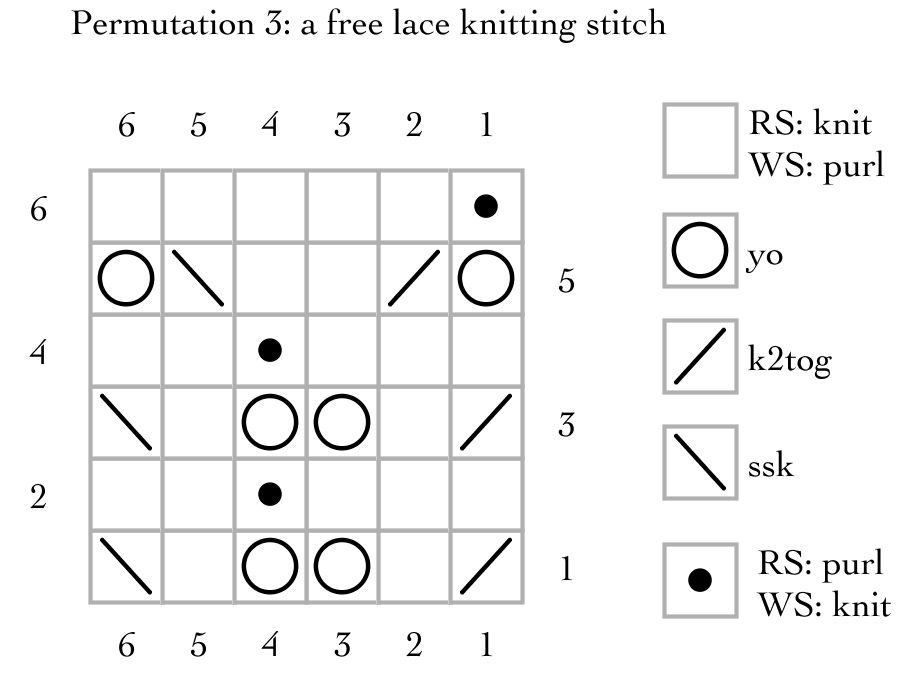 I think this one has some promise, but I think I’d want to play with more than just the decreases before I’d be content.

I decided to try another set of numbers next, being careful with the bias issue. I rolled these four numbers: 4, 2, 6, 3. Two have YOs to the right, and two to the left, so that’s all right. 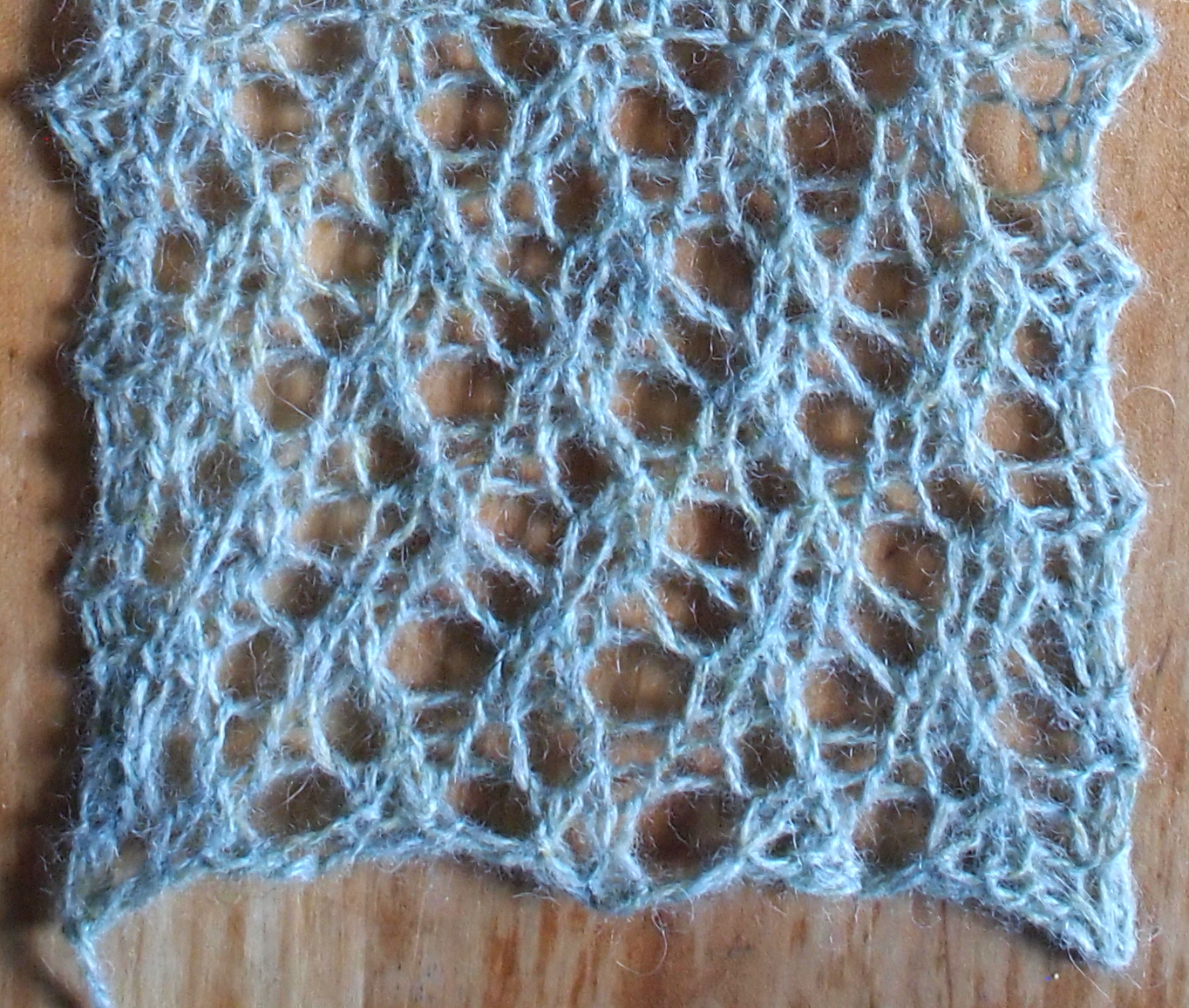 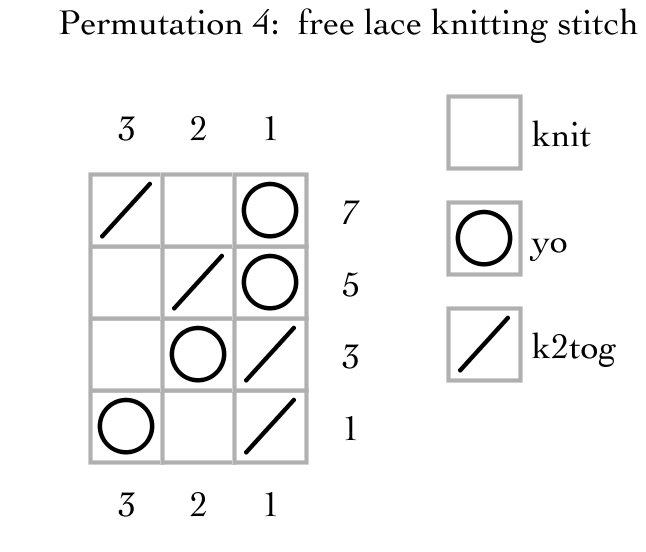 The first thing I noticed is that this made some of the rows into duplicates (highlighted in the second chart). There’s nothing inherently wrong with this—some stitch patterns do this—but I decided to get rid of one each of the duplicates before knitting the next swatch. 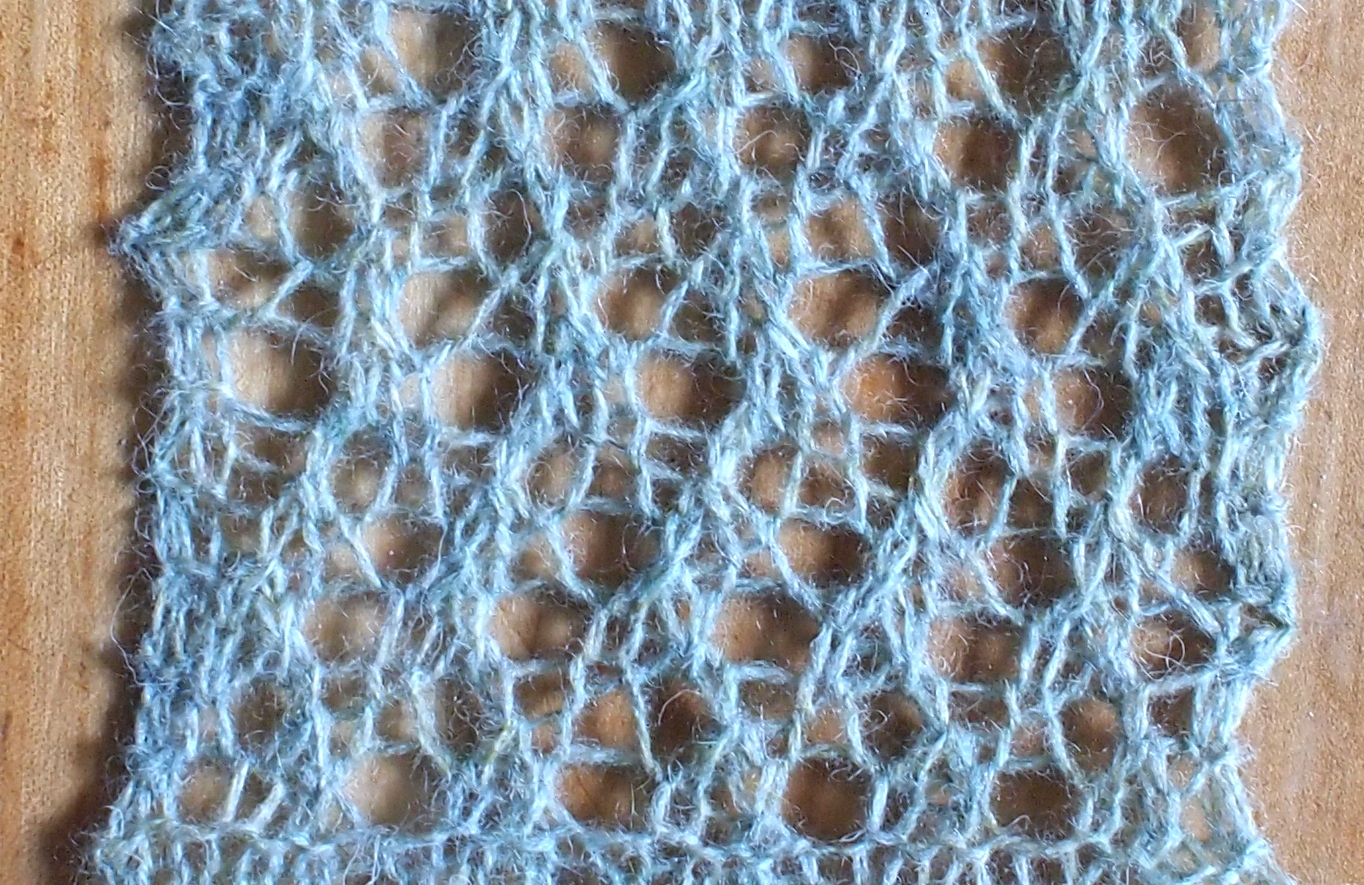 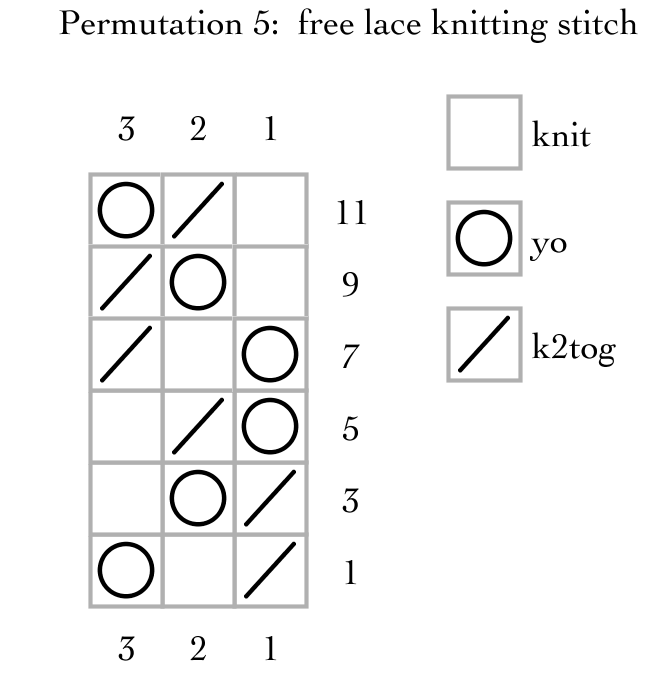 This is getting closer to something I like, but it’s not quite there. I changed three of the decreases to ssk, and that made me much happier: 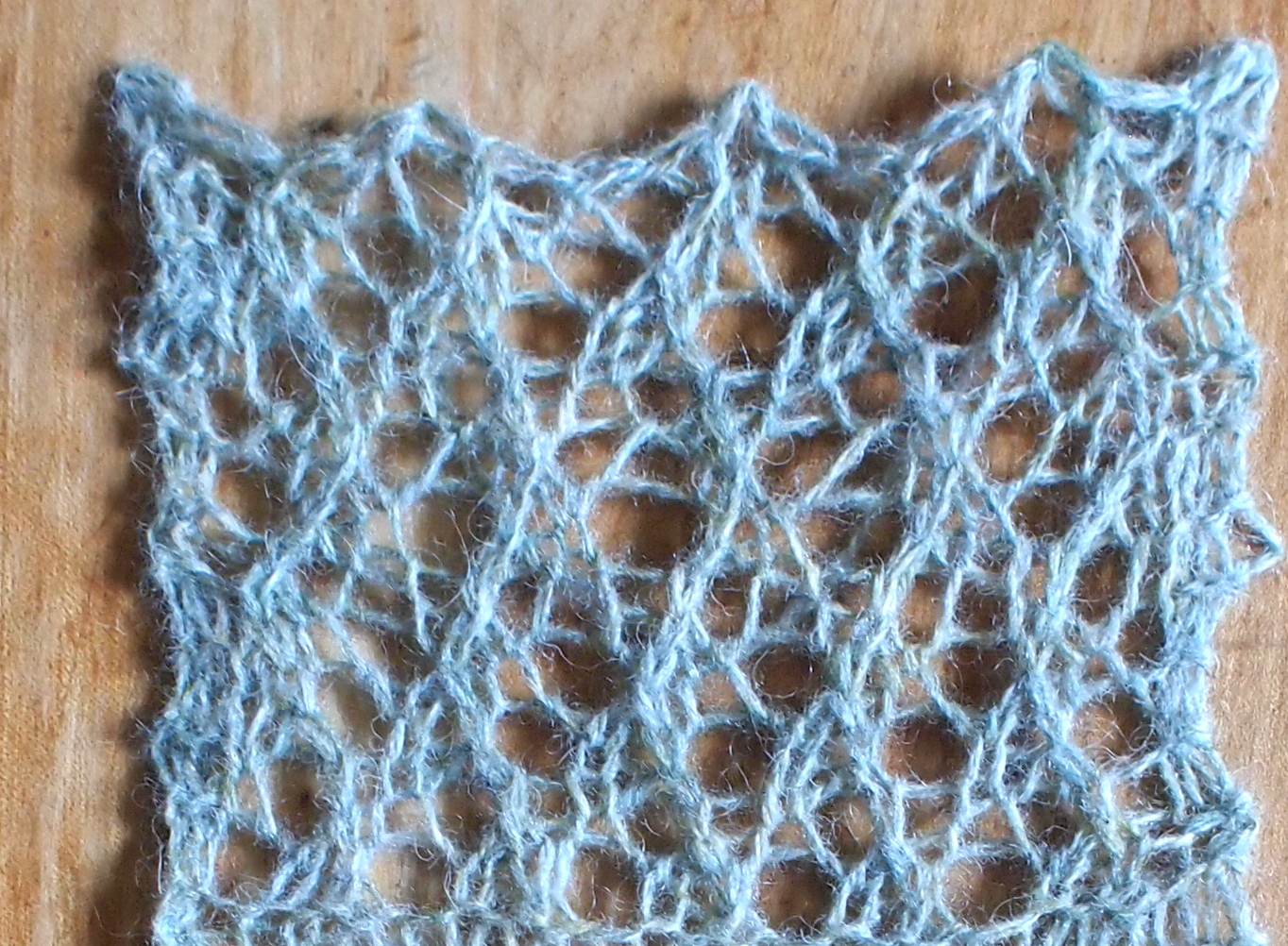 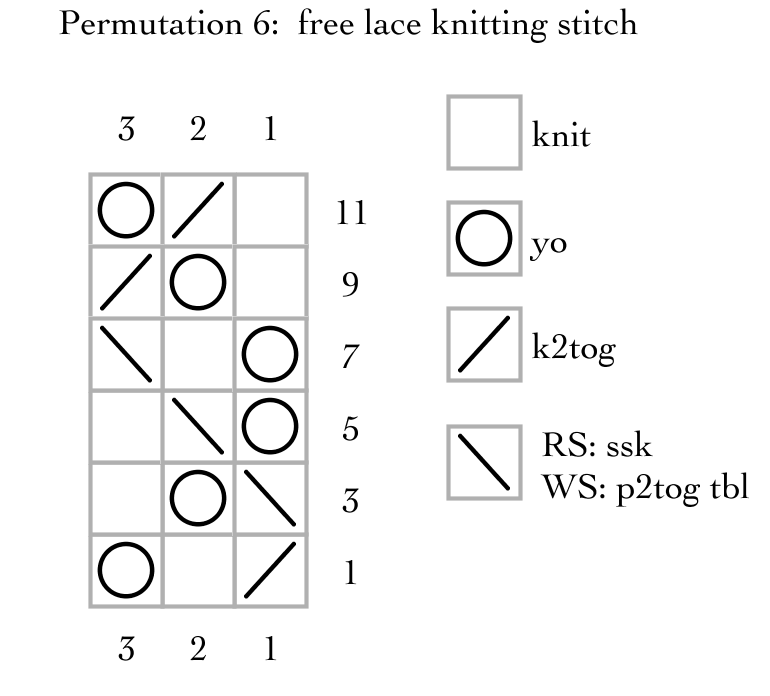 I think this is pretty good. There’s a few tweaks I might want to try later: stitch 3 from row 3 and stitch 1 from row 9 are kind of niggling at me. What would happen if I beaded them? Or twisted them by knitting them through the back loop?

This might all give you some ideas for how to play with permutations yourself; I hope you do!