This is still an experiment, and probably I should use it in something other than a swatch before putting it out there, but I think it looks promising. Feedback is welcome!

This is for everyone who’d prefer to have a provisional cast-on which allows knitting in the other direction without having the stitches offset by half a stitch. you might call it a jogless cast-on. I have only tried it in this bulky yarn so far; I hope that it would work well as the cast on for a rectangular lace stole worked from the center outward. I will try knitting a lace swatch with it next week and see how that goes.

This is an idea I’ve had in the back of my mind for over a year, and I’ve finally gotten around to trying it. I don’t know if anyone else has invented it; please let me know if you’ve seen it anywhere! It’s not in the books I can access.

Thanks to Naomi (aka nerdartist) for the name, which was inspired by the way the two strands at the bottom edge are flipped back and forth.

Despite the cons, I’m really excited by this one and hope to explore it in my future knitting. (Here is my lace experiment.)

My original idea had to do with twisting two lengths of yarn together and then picking up stitches between the twists, but then I realized that twisted yarns are really kind of a pain to deal with if you want to be able to untwist them later. So I wondered about how to make two wiggly lines of yarn set on top of each other like this:

These images illustrate the concept I had in mind. Then I had to figure out how to accomplish it.

First, cut two lengths of either the same yarn or contrasting yarn. This will be part of the finished knitting, so waste yarn isn’t in order. (Unless you’re just swatching and want to use contrasting yarn to see what you’re doing.) I don’t know for certain yet how long they should be, because my swatch was sized based on the length of yarn I cut. I would guess that each of the two lengths should be 2 – 2.5 times the width of the final knitting, plus a bit for the end at each side. 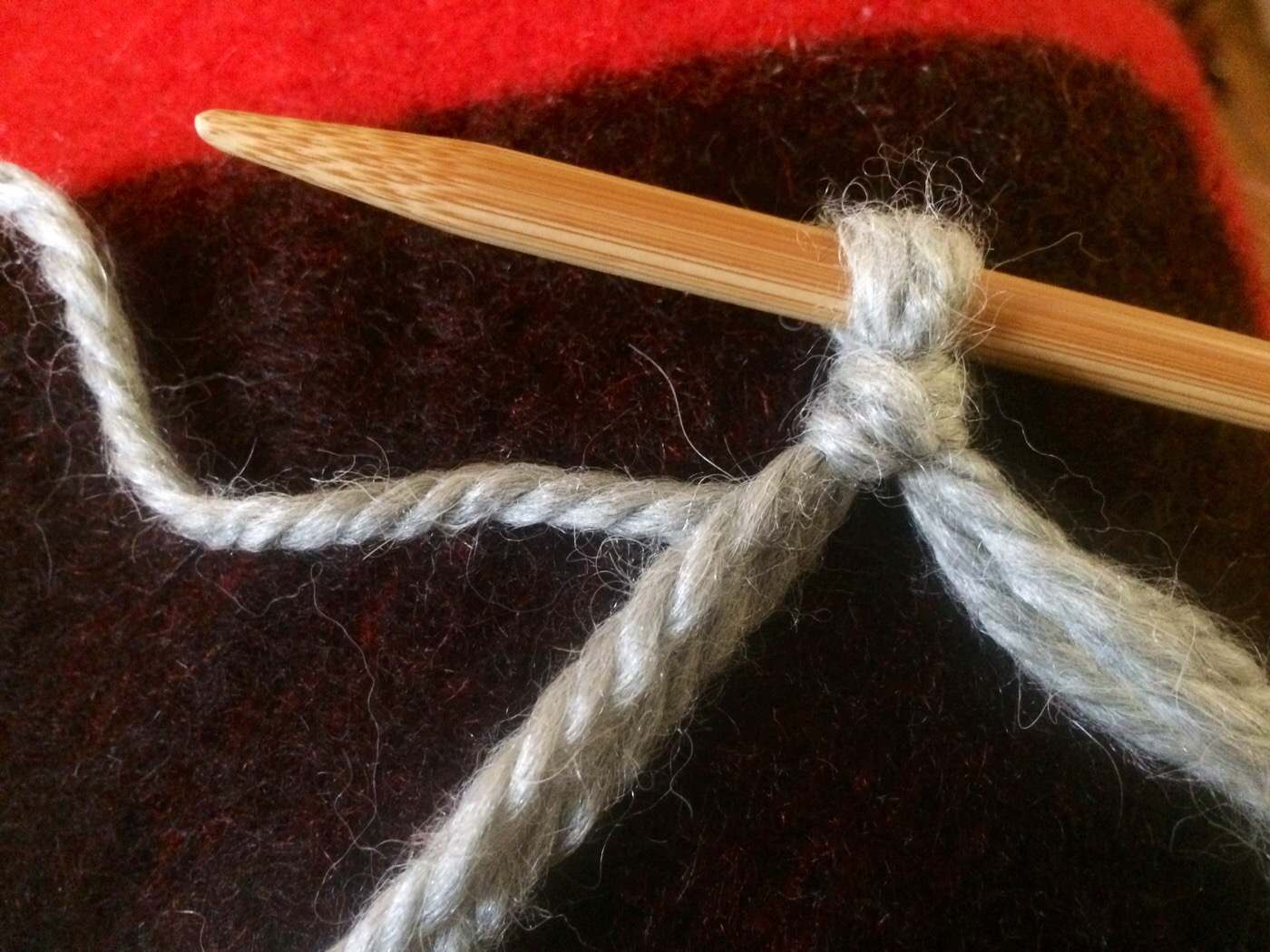 Hold together one end from each of these lengths and also the end of your working yarn. (Three ends total.) Make a slip knot in them all together and put it on your needle. This will be undone later. 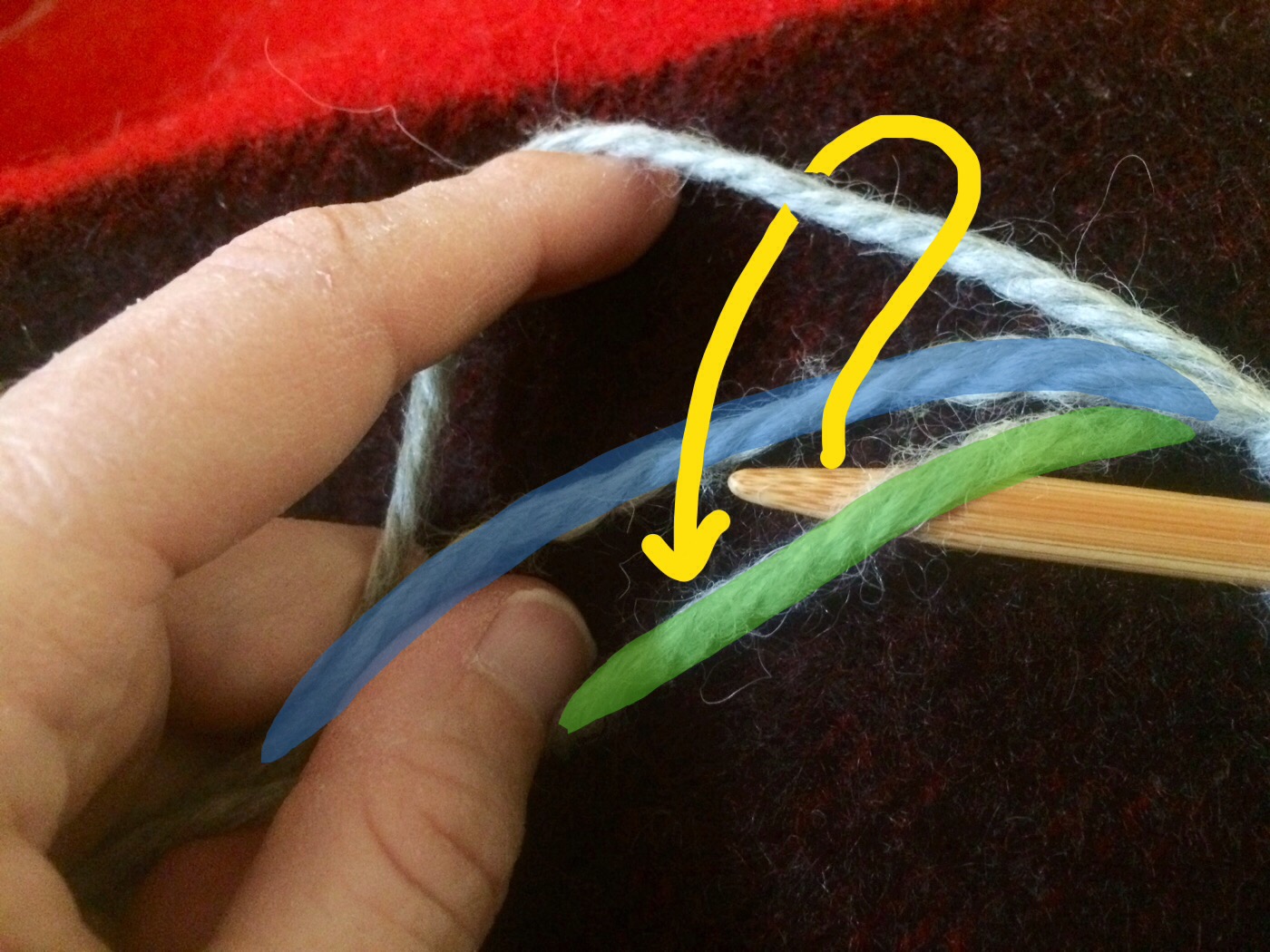 Repeat steps 1 &  2 until there are enough stitches on the needle, not counting the slip knot.

Important note: The key to this cast-on being stretchy enough is that the stitches should be stretched along the needle with large gaps in between as you go. 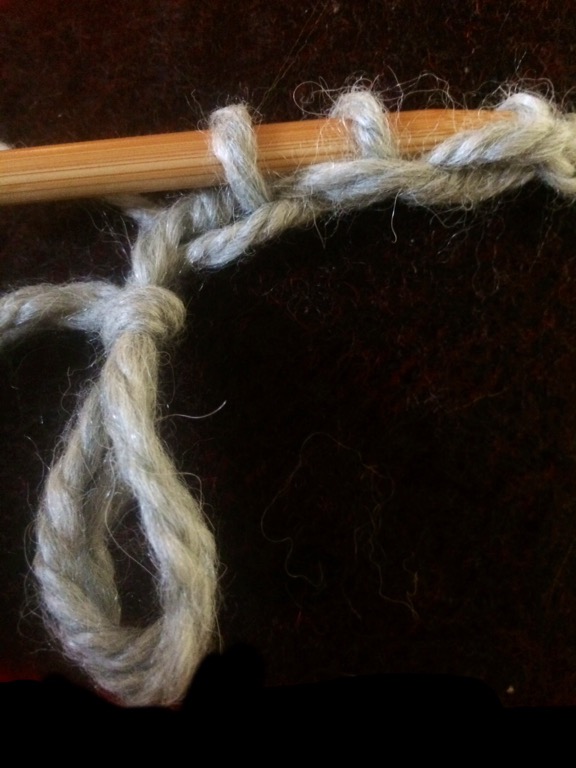 Once there are enough stitches on the needle, tie a slip knot in the ends of the two parallel strands, leaving the working yarn free.

Work across a wrong side row, dropping the slip knot made from three yarns from the needle when you reach it. 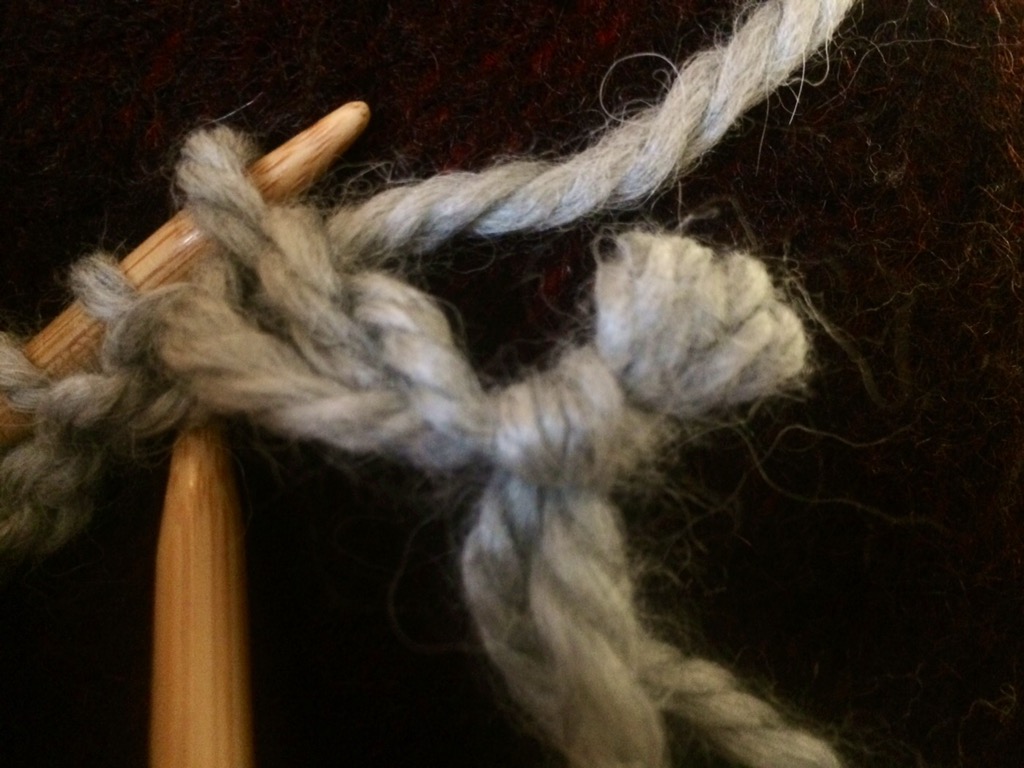 Just leave it hanging from the knitting for now; it will keep the ends under control. 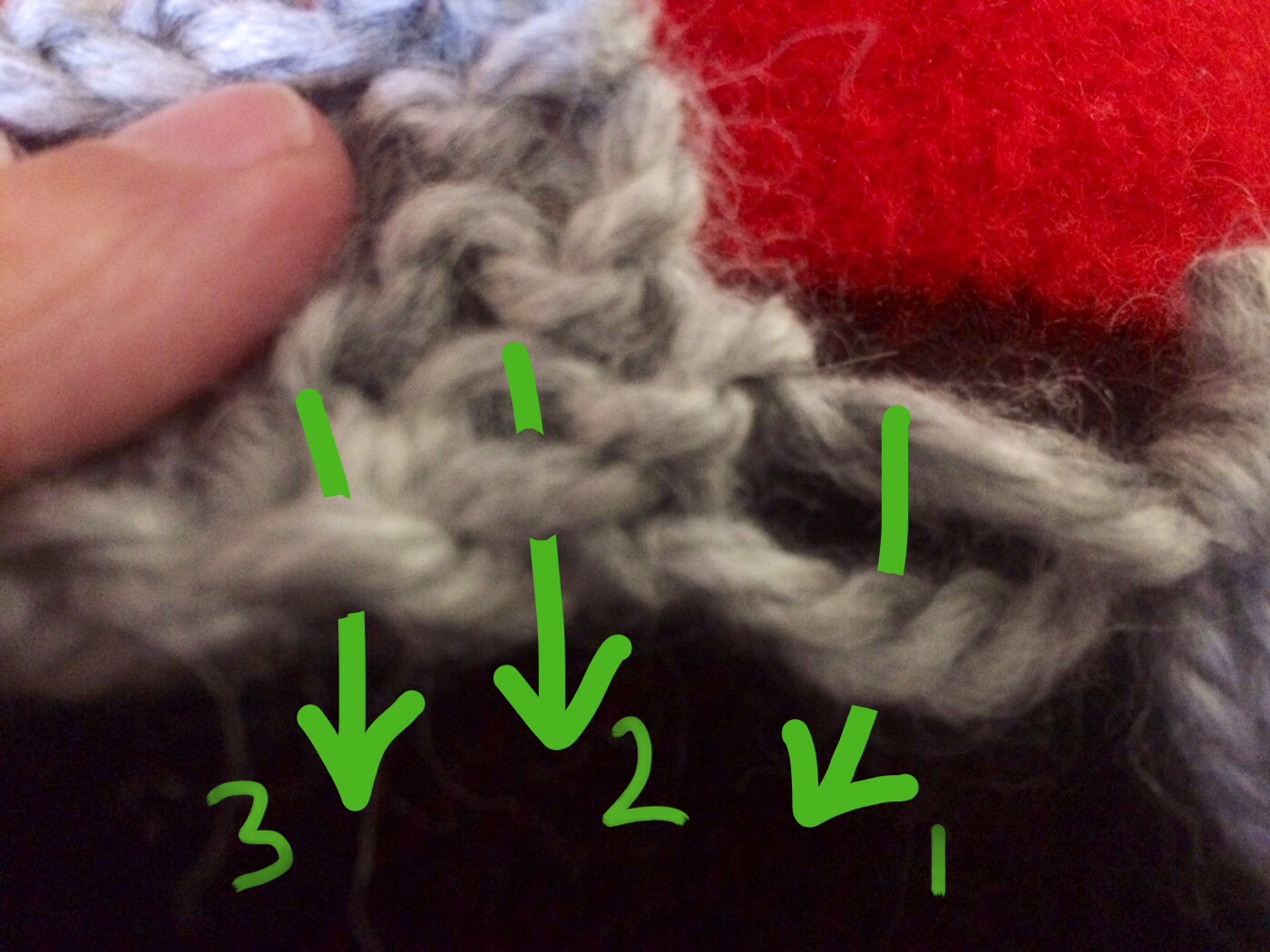 The next step is to pick  up stitches (without yet knitting them) in the parallel strands, ready to go the other way. The first stitch will be picked up in the loose loop next to the slip knot. The remaining stitches will  be picked up in the horizontal bars that weave in and out through the knitted loops, like so: 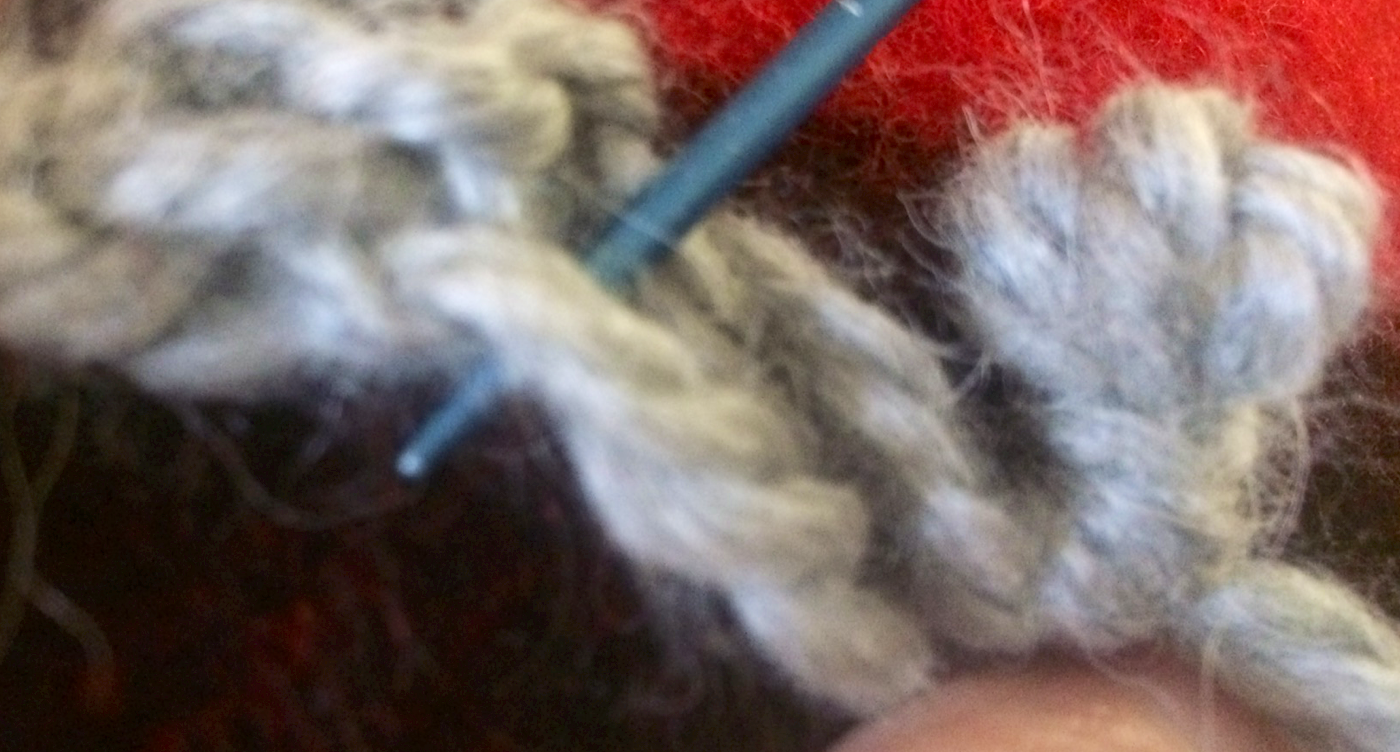 Each stitch is picked up from top to bottom. If possible, I recommend using a much smaller needle to make it easier to pick up the stitches.

Here’s the second stitch being picked up. 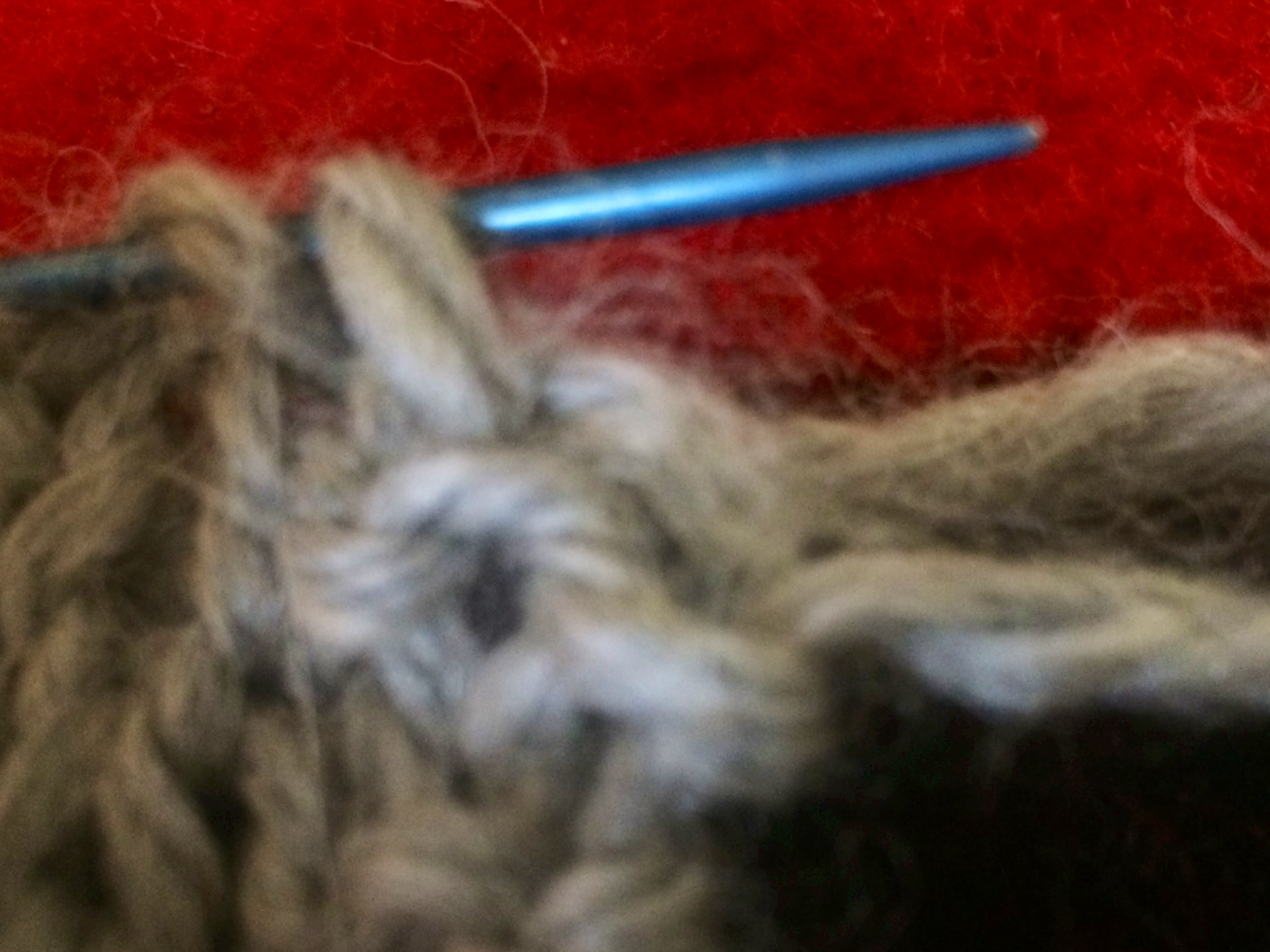 The last stitch was hard for me to find; I ended up tugging gently on each of the ends on that side to find it. I don’t have a photo that shows it on the needle.

Now knit one right side row across, with the proper needle size, and continue as before. 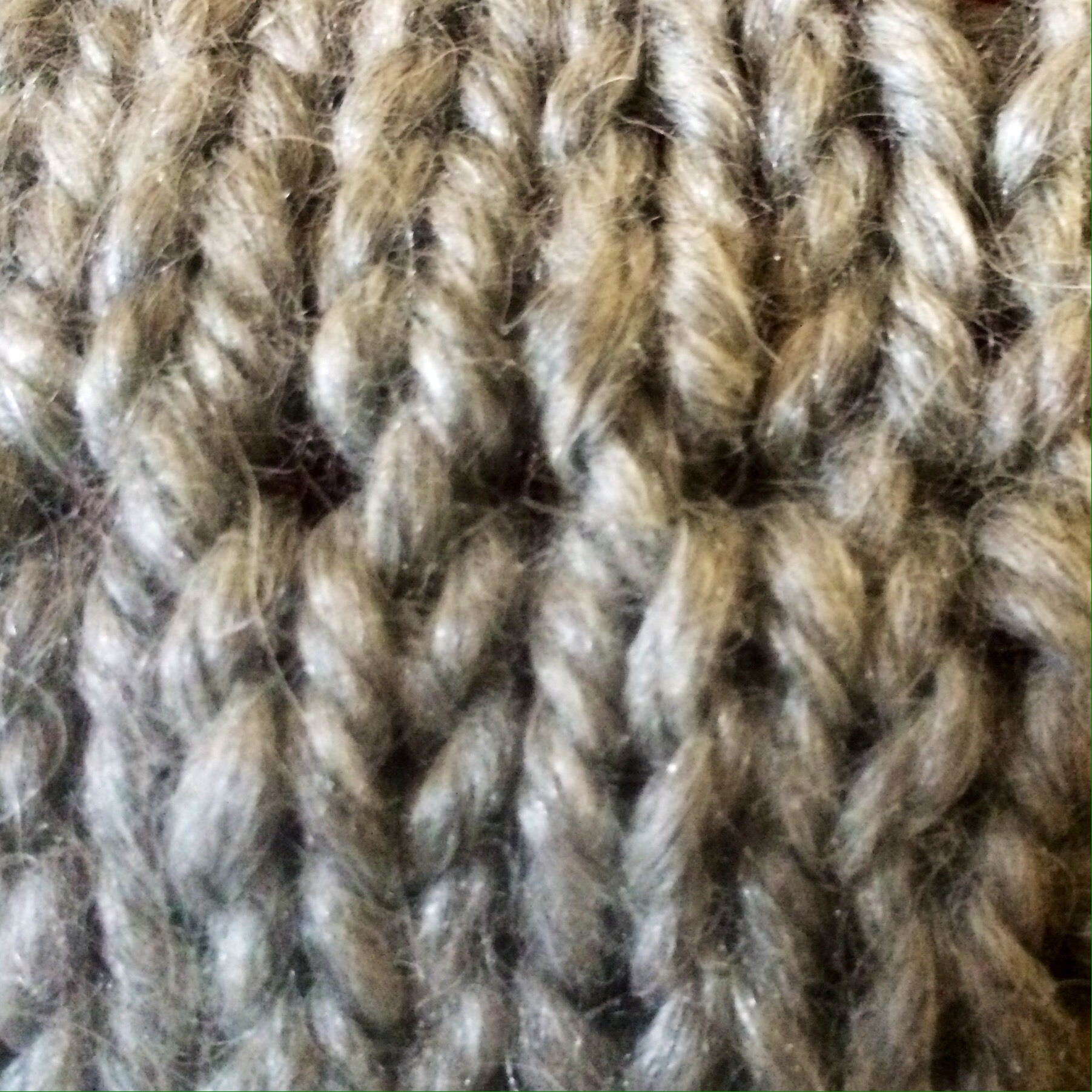 Here’s the end result of my swatch. Notice that the strands of what was the bottom yarn of the parallel strands are more visible because they always cross in front. 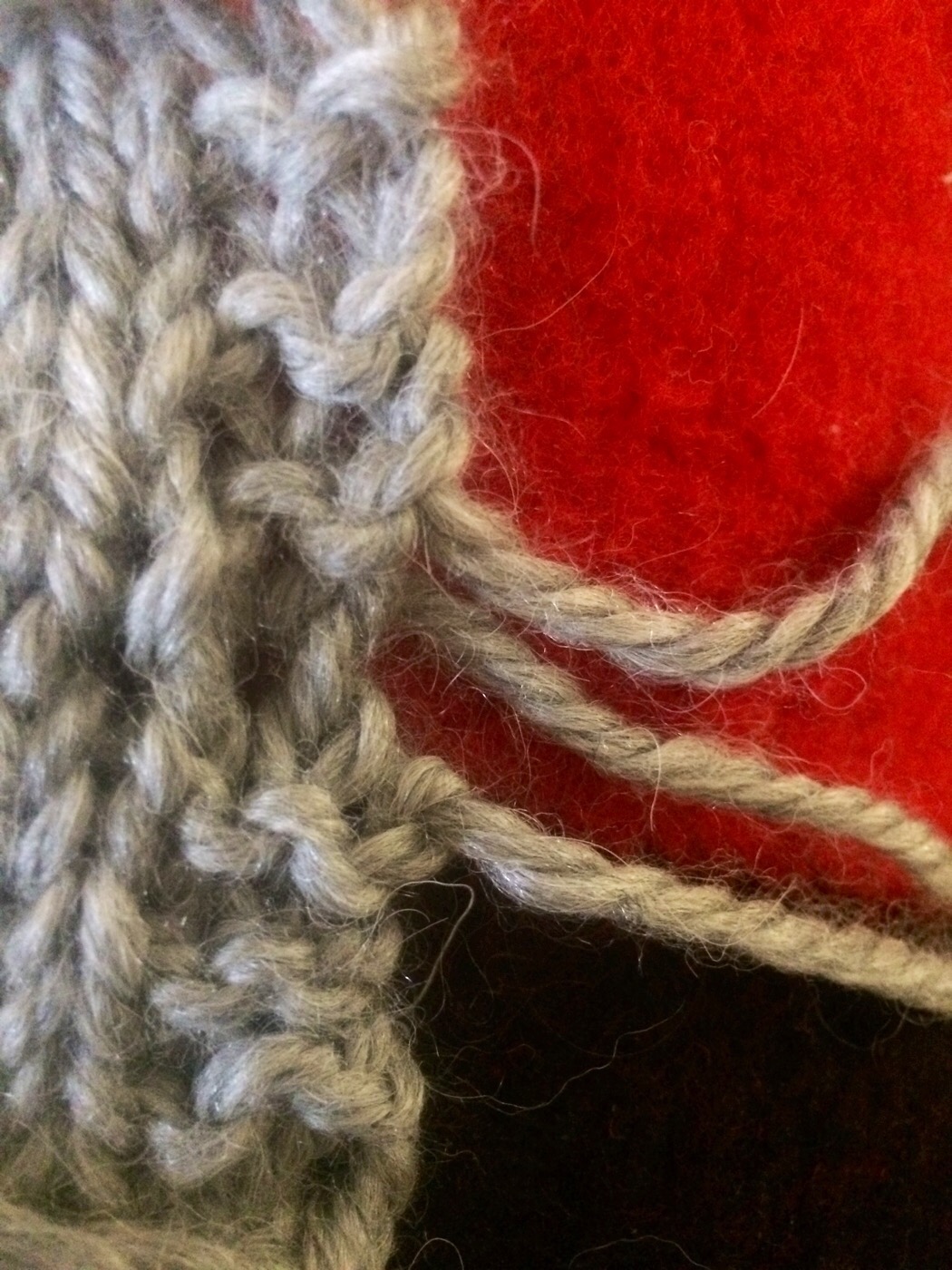 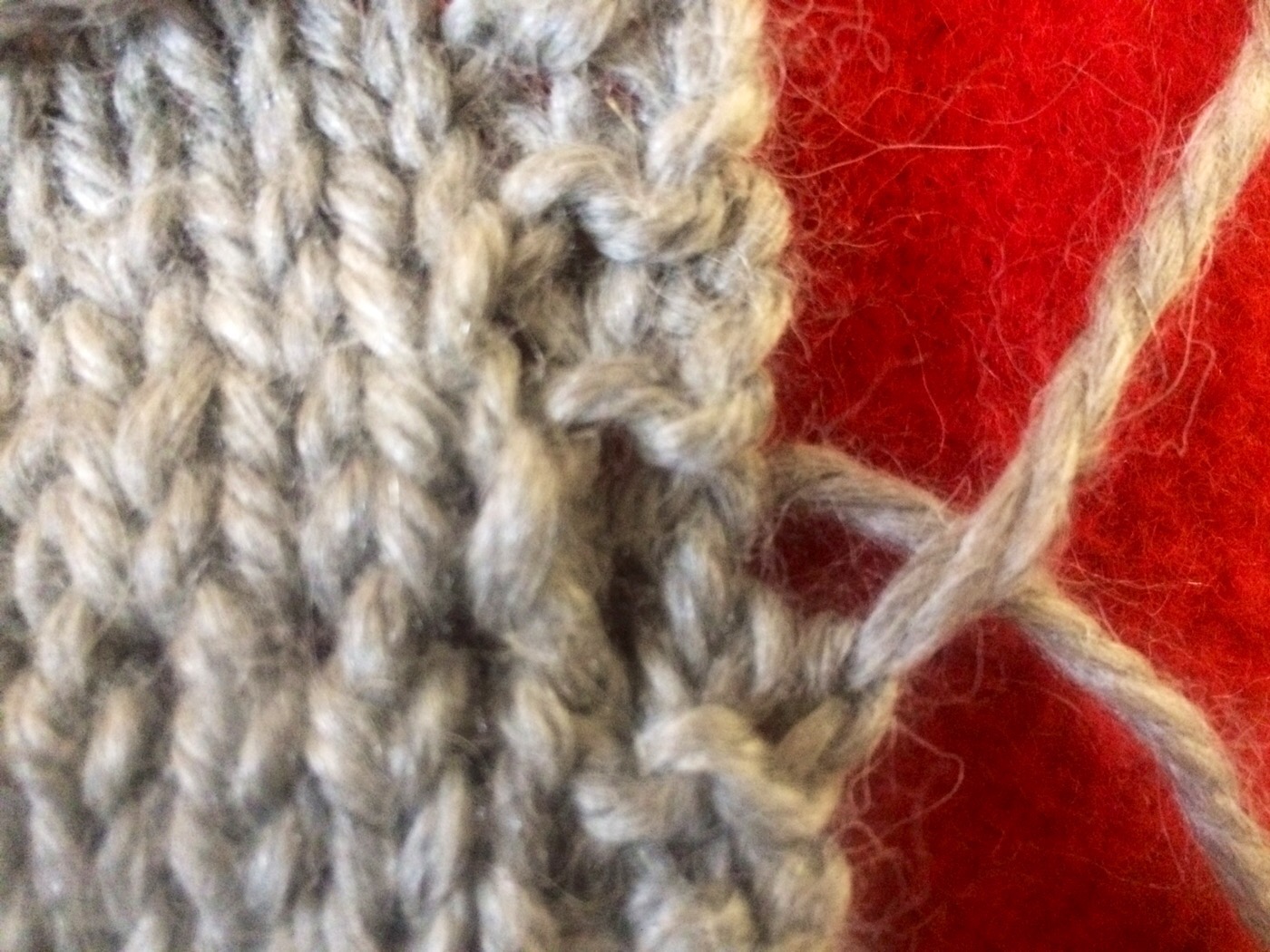 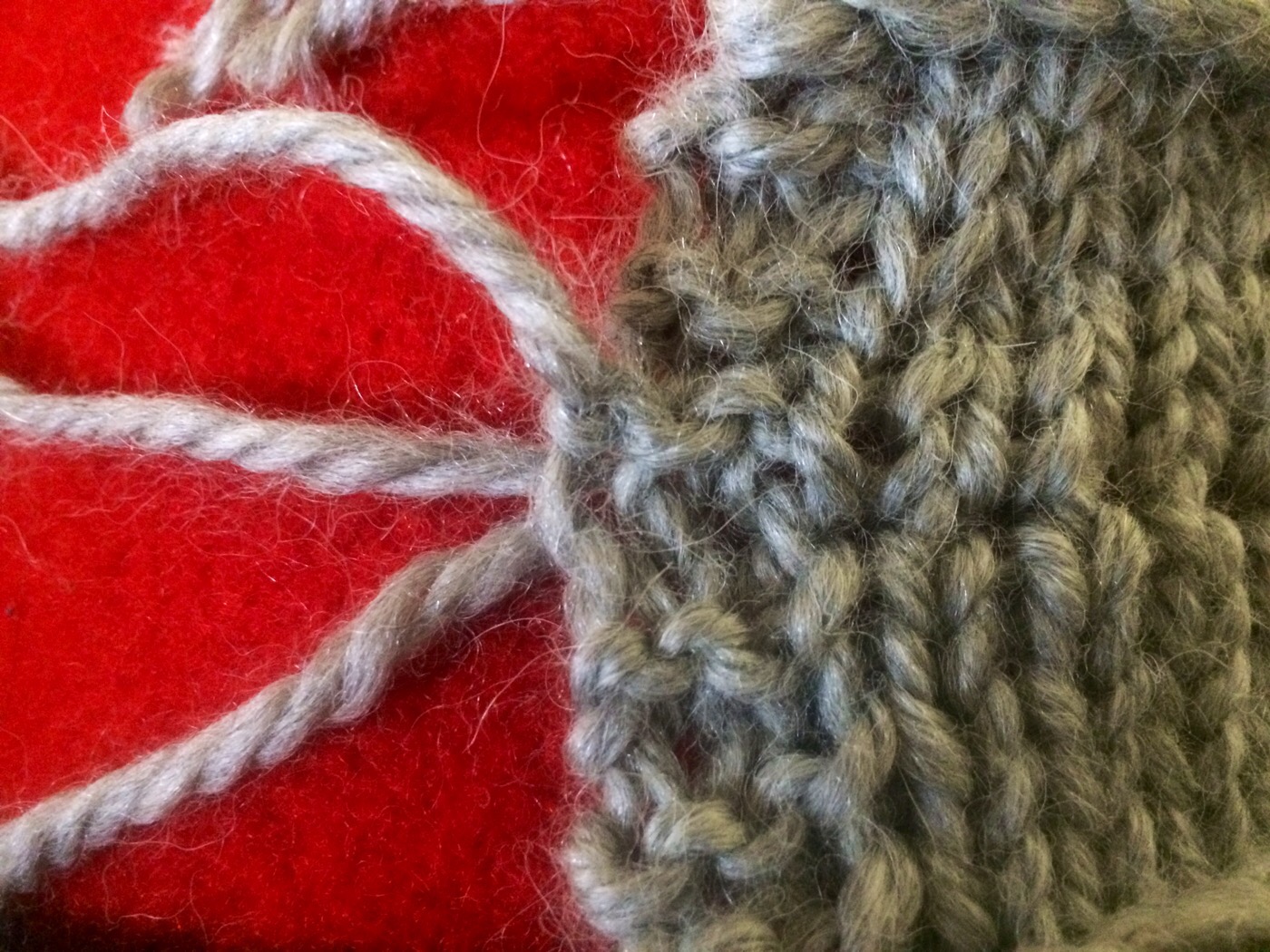 Undo the slip knot at the other side. This edge is much more stable; work in the ends where it seems good to you.

If you like my posts like this, please consider supporting me on Patreon or donating with my Paypal tip jar in the sidebar. Thanks!

One thought on “Flip-flop cast-on”