This is part of my rewrite of my secret code instructions. It won’t make sense if you don’t read the rest of the series! It has to do with using one of my encoding methods in a non-geometric shape.

Making rectangular code grids is entirely arbitrary, though it’s a good place to start since it’s easier. However, there’s a range of reasons why one might want to chart code grids as different shapes, from it being impossible to make good lace from any of the rectangular ones, to just plain feeling like it.

There are many shapes that can be tiled across a flat surface; the only limitation for code grid purposes is that you be able to figure out how to turn it into graph paper squares. So far I’ve designed stitches with diamonds with three different ratios: 1:1 (square), 1:2 (half as wide as it is tall), and 3:2 (the number of stitches is half again as big as the number of rows.) In all cases, the ratio is based on the number of stitches in proportion to the number of right side rows. I’ve also done a six-sided shape (not an exact hexagon). Many other shapes would be possible, but I’ll leave them up to you.

Here’s how it works.

I usually work with a diamond that’s been cut in half vertically (because I like to mirror my stitch patterns). I mark off the end of each row of the diamond with a square to help mark the outline of the diamond. While this isn’t really going to be decipherable as code, I still like to do this where possible, at least during the encoding process. It also helps me tile the final stitch pattern.

The only one of my charting methods that works non-rectangular shapes is Method 4. I start at the bottom, and count as usual, but the end of the row comes in a different place for each line.

Here’s Peace again (I’m using the telephone keypad numbers again: 73223), laid out on three different diamonds, and also on a deformed hexagon. In each case I show the half version, and then mirrored, and then tiled into a rectangular stitch pattern. (Click on any of them to enlarge.) 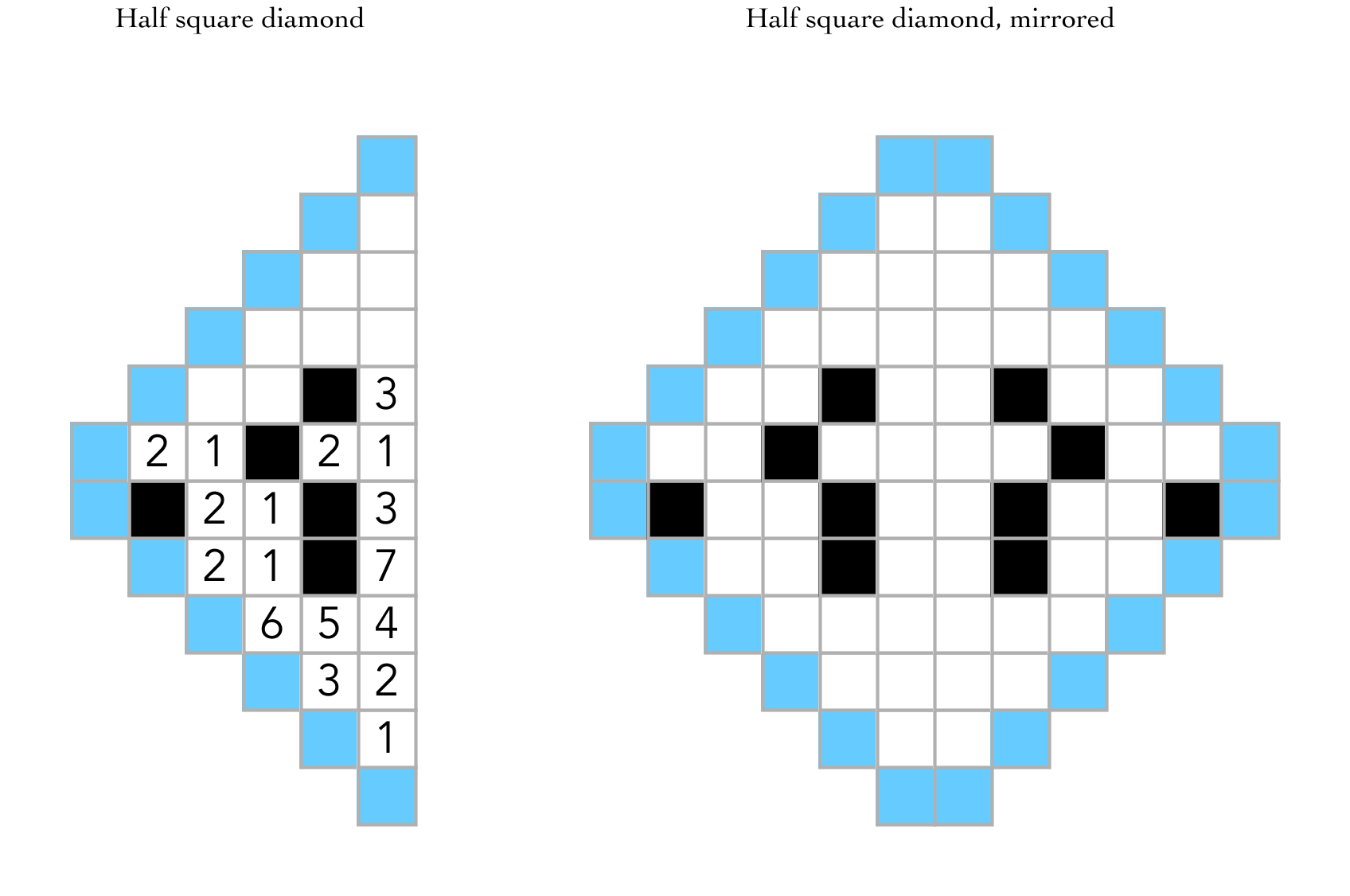 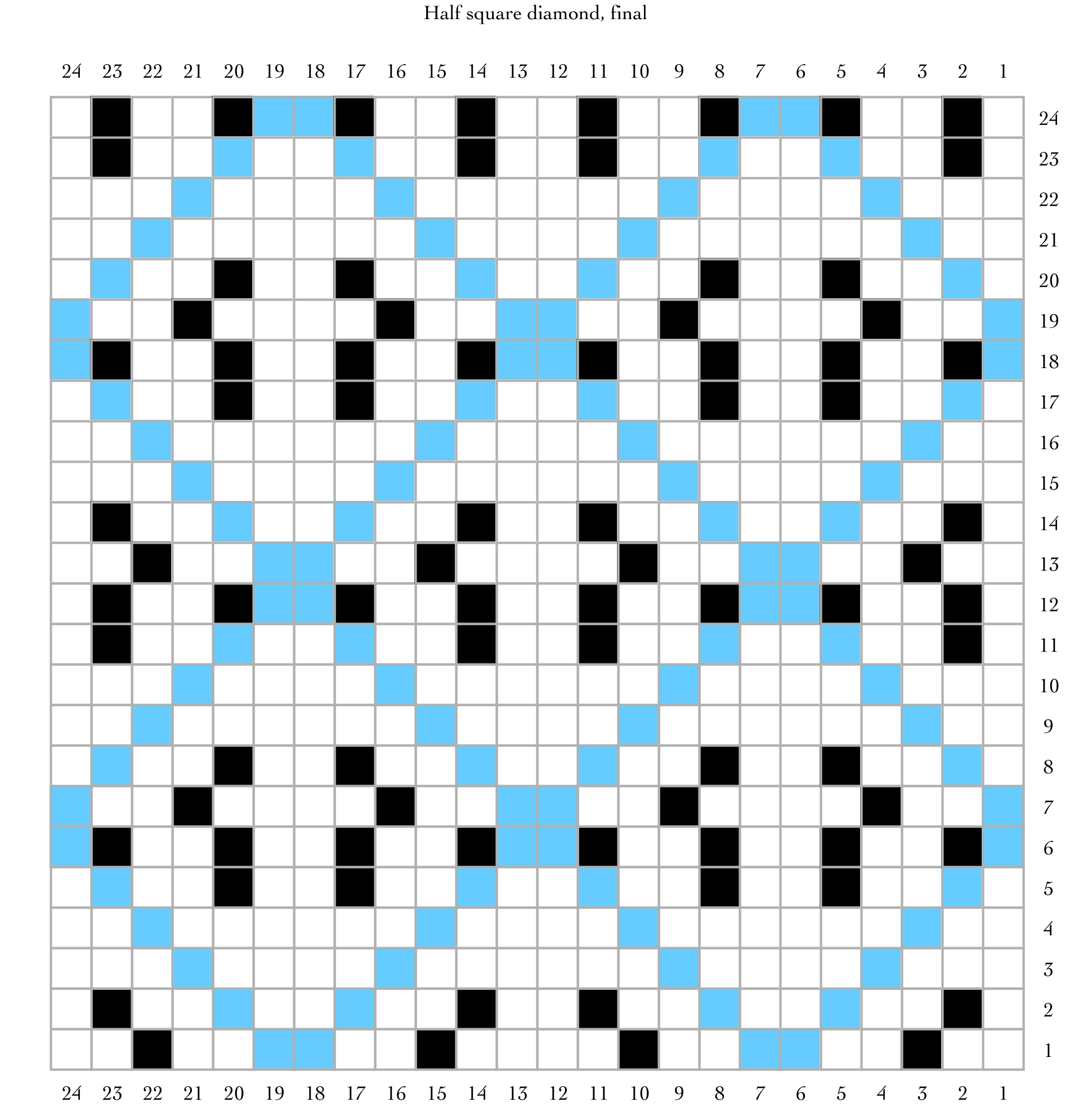 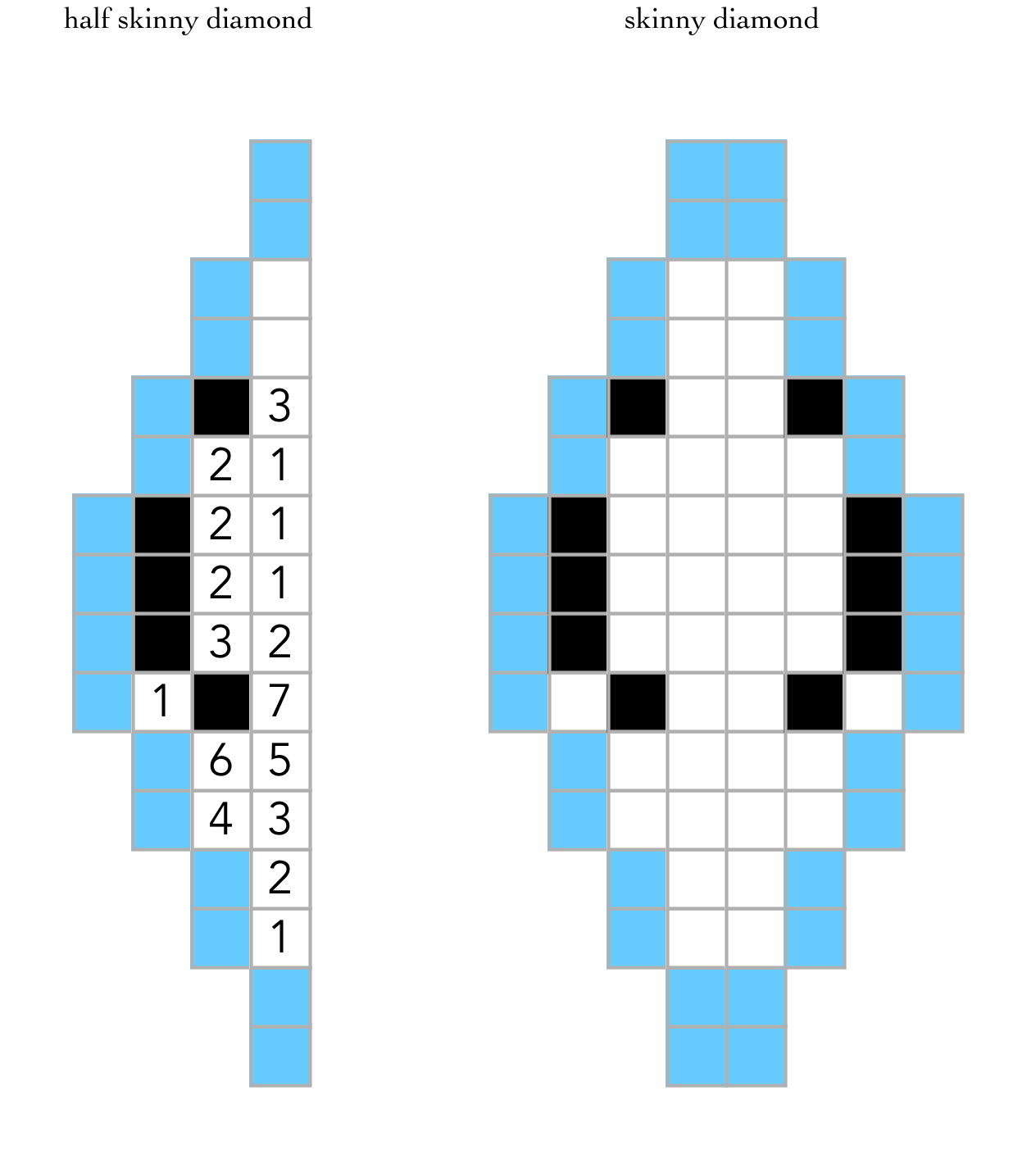 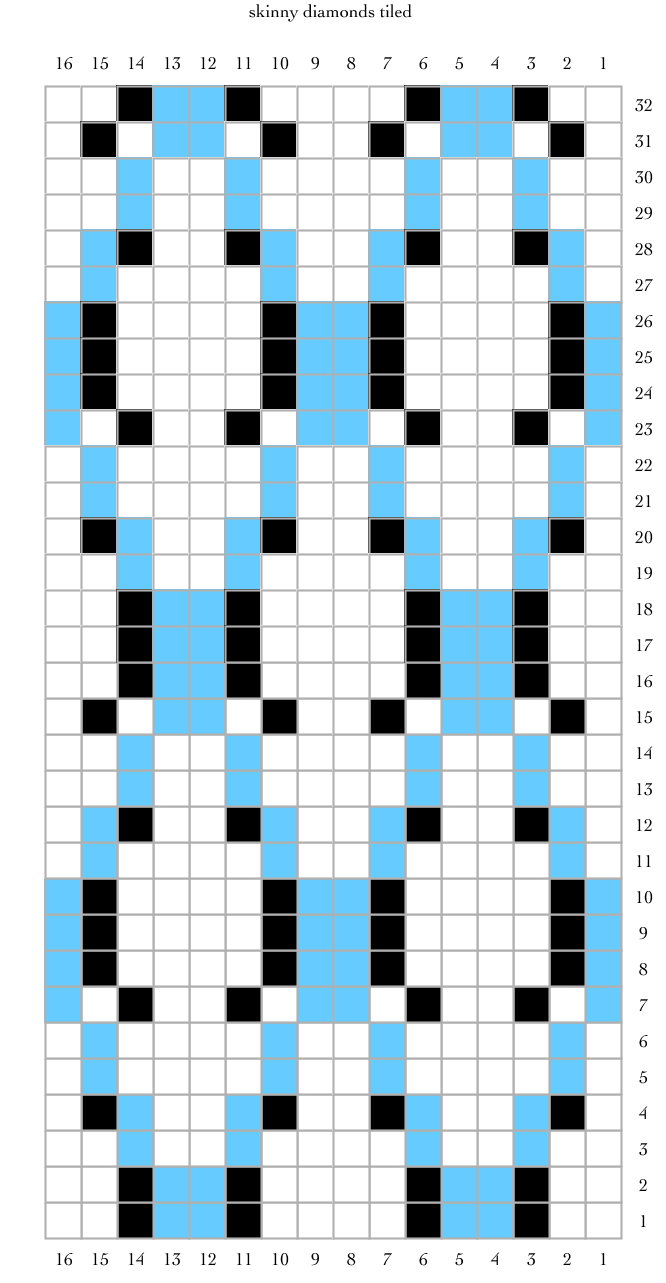 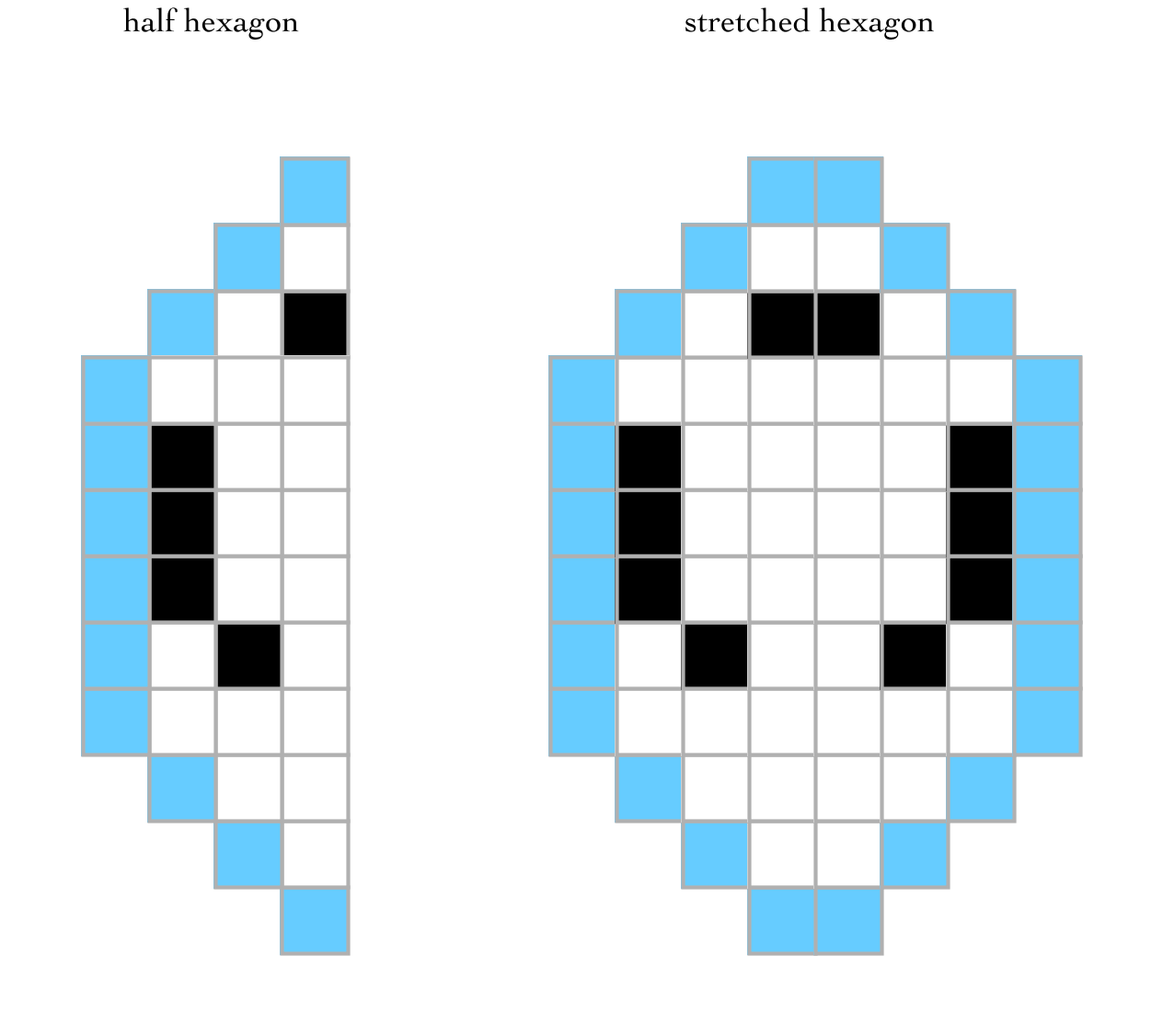 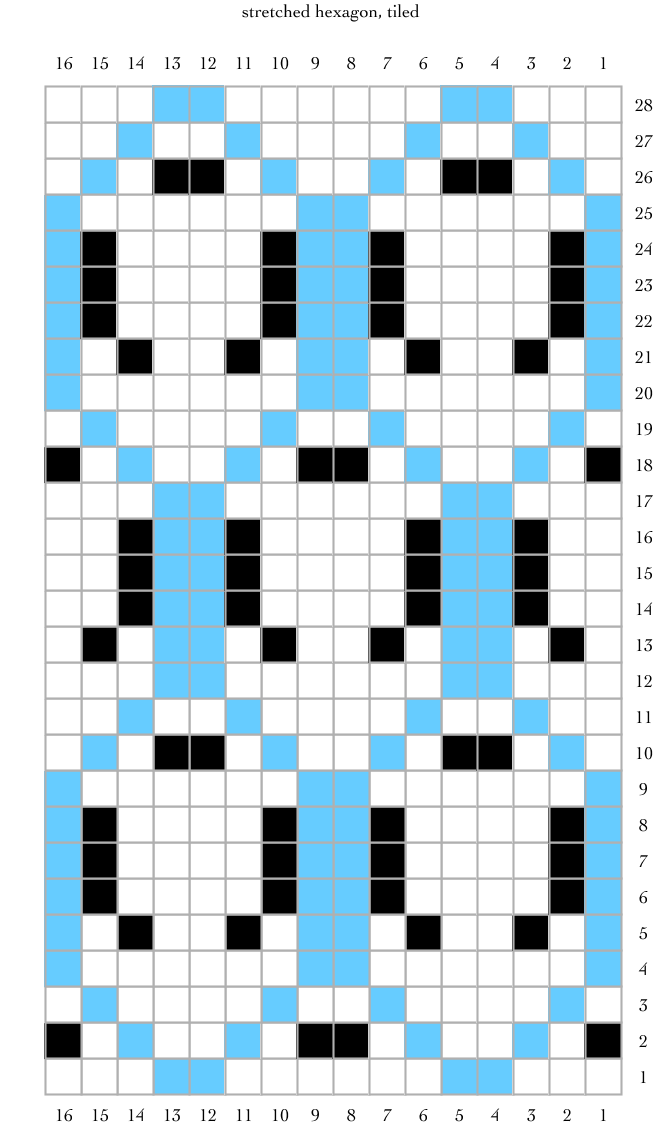 After doing the layout, the colored squares (that aren’t black) get deleted before turning the whole thing into a stitch pattern.

Note: this particular method is one of the versions of my technique where this becomes not really a secret code anymore, as it becomes less and less reasonable to expect someone to decode the results. But it does make an interesting basis for creativity.