I’ve been admiring Hitomi Shida’s stitch patterns for quite a while now and have been planning to buy one of her stitch dictionaries. So when Tuttle Publishing offered me a copy of one of her books in exchange for a review, I jumped at the chance. It wasn’t until after accepting that I realized that it was even more exciting than I’d thought: this is one of Hitomi Shida’s stitch dictionaries translated into English for the first time, with a complete glossary of the chart symbols and an explanation of how to read Japanese knitting charts.

Japanese Knitting Stitch Bible: 260 Exquisite Patterns by Hitomi Shida, translated with an introduction by Gayle Roehm, will be available on October 10. You can preorder it on Amazon, Barnes & Noble, or through your local bookstore.

I’ve flipped through a few Japanese stitch dictionaries at fiber festivals, and I’ve read a little bit about Japanese charts online, but this is the first chance I’ve really had to use any of these charts. Here are the things I knew before even opening the book:

So, what did I think of the book? The short version is that aside from a very few minor quibbles, I was impressed. Moreover, I would have been willing to spend twice the list price of $17 to get this book.

Recommended for: cable lovers, knitting designers, and confident knitters who are ready to move beyond basic lace. This book will be especially useful for anyone who wants an English explanation of untranslated Japanese stitch dictionaries.

The first thing I did when the book arrived was to flip through the pages and gloat at the variety of lace and cable stitches available. Then I sat down to look at it more systematically, both as a knitting designer and as a librarian. The first thing I noticed was the book’s construction: while it is a paperback, it has sewn signatures, which means it should hold up well.

Gayle Roehm’s introduction explains how the charts and the symbols work quite clearly. Her explanation made the difference between struggling to understand an unfamiliar chart system, and being able to use it with confidence. 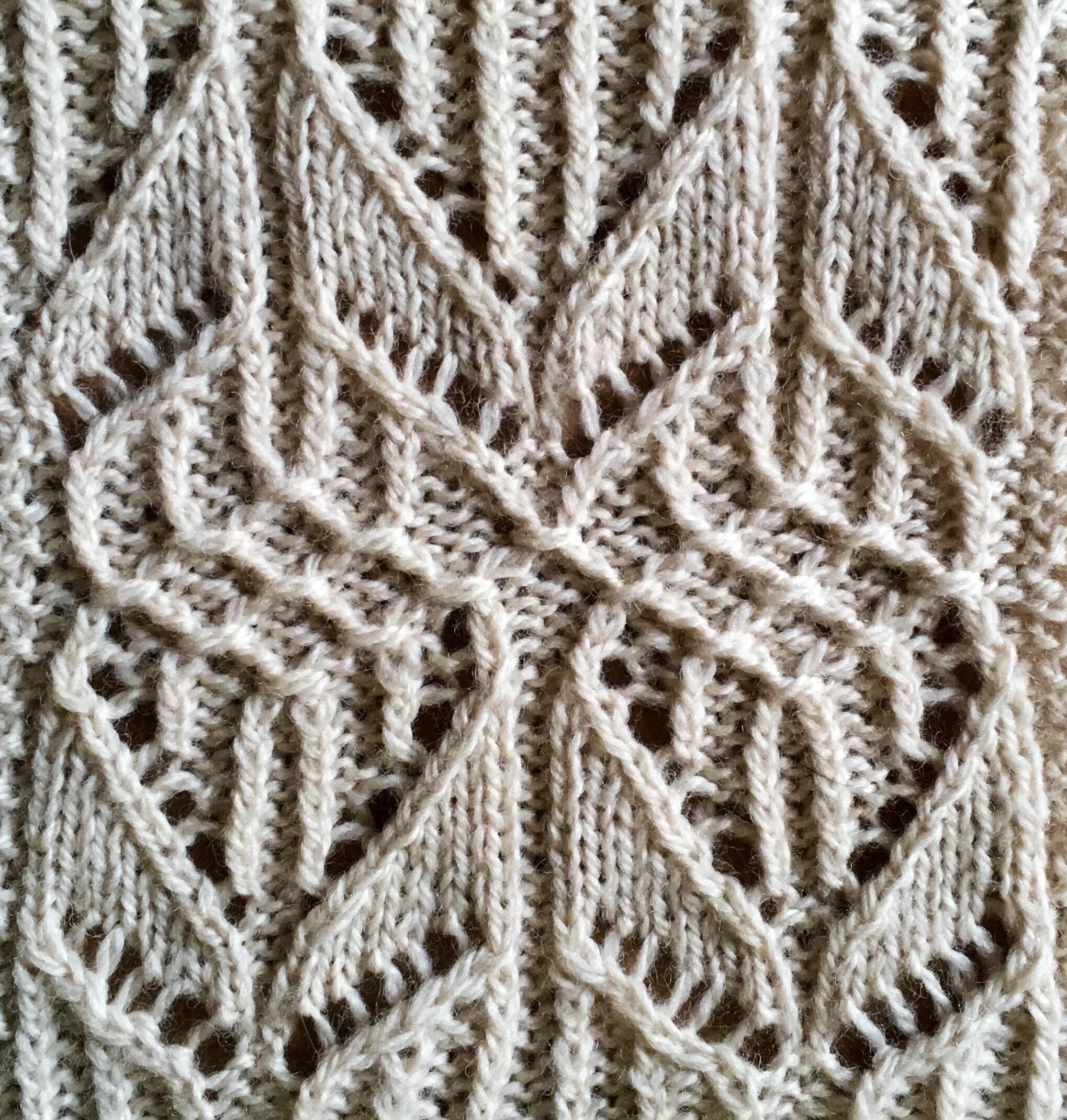 The stitches are organized by category: Lacy Patterns, Overall Patterns and Crossing Stitches, Pattern Panels, Pattern Arrangements, Round Yokes, and Edgings. Most of the stitches use knit/purl patterning as well as lace or cables; these have some sort of patterning on every row, though it flows logically from the previous rows. The stitch patterns for round yokes or collars make my brain fizz with possibilities. The section that I find most exciting, though, is Pattern Arrangements. Hitomi Shida deliberately designed these to show how she rearranges and modifies motifs to make new stitch patterns. Each page has a pair of stitch patterns on them. One stitch pattern is a modified version of the other, and there is a brief description of the change made.

I felt I couldn’t write an accurate review of the book without testing its explanations, so I decided to knit a swatch of one of the stitch patterns that had a technique that was new to me. I chose stitch number 72 from the Lacy Patterns section, both for its striking design and because I’ve never done wrapped stitches of this sort before. I did have a little trouble with the chart style at first, but of the sort that comes with learning a new method. By the end of the swatch, I was reading the chart comfortably.

I also knit a small swatch to try out some of the other instructions that were new to me; these were all bobble variations. I don’t usually care for bobbles, but I liked these: they struck me as elegant.