Recently, a friend on social media linked to an article about the Cooke and Wheatstone telegraph system, which used something different from Morse code. My immediate reaction was to look at the code chart and think that it looked like knitted cables. I found this exciting, because it’s been very hard to reliably produce fancy braided cables from my code charts.

It doesn’t help that my very first attempt to produce such cables worked, but most of my efforts since then have failed.

In the end, the Cooke and Wheatstone system turned out not to work for my purposes, for the same reasons that my usual code grids don’t (with the added difficulty that there’s several letters missing with that code, so that one has to use S instead of Z and K instead of Q, and a few other substitutions). Nonetheless, this has led me in some helpful directions, because I talked the problem through with a designer friend. This kind of dead end is never a waste of time for me, even if there’s mild disappointment involved.

The version of the code on the left made me think “cables!”, and indeed, my son walked past while I was looking at it and remarked that it looked like a knitting chart.

The trouble turns out to be that while the alphabet in order could probably be made to make continuous interconnected lines from column to column, once the letters are mixed up to make words, it doesn’t work out so well.

These are the two kinds of coded cables I’ve been able to make in the past: 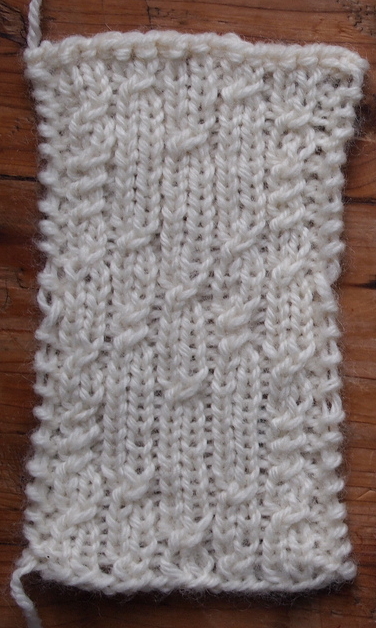 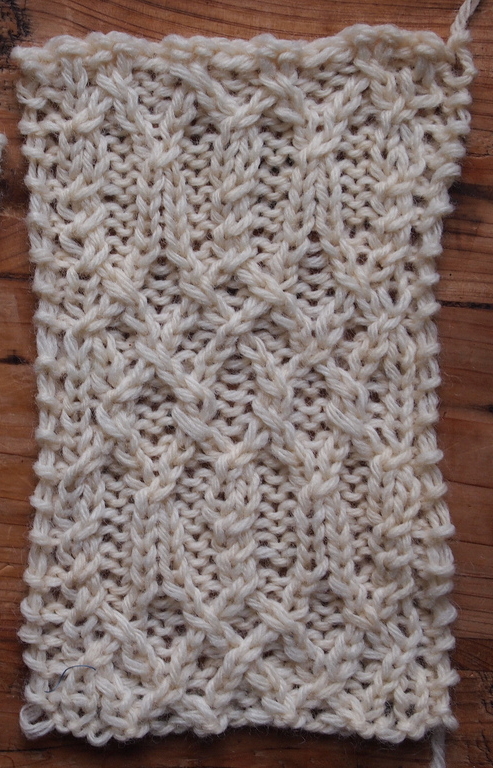 (These are from my page about encoding cables; they show peace.)

The plainer one is just fine, and that style looks good to me so long as the cable crosses come frequently enough. The one with lots of braids is more interesting to me, but it’s that kind of thing that I’ve had a hard time making work with codes.

Anyway, I looked at the Cooke and Wheatstone chart, and figured out the code for peace (or rather, pease – it would have to be distinguished from the word with the same spelling from context.)

I decided to see what this looks like as an actual cable chart. Each cable cross needs to be at least two stitches wide, so each symbol of the code will need that much space. There also need to be plain rows in between the cable cross rows. I decided that the vertical lines would be two knit stitches, the / would be a 1/1 RC and the \ would be a 1/1 LC. The chart is thus ten stitches wide by ten rows high.

Here’s what happened with the Smith and Wheatstone code for peace:

I’ve circled the purl stitches that lead into or come out of what need to be knit stitches for the code. This was no go. But maybe this was a fluke. What about some other words?

Here’s the charts for cable, knit, and maybe. Cable had similar difficulties to peace for the fancy crossings. I couldn’t even figure out where to start with knit. Maybe was a partial success, but I thought the chart didn’t look promising enough to bother swatching.

I also didn’t care for the appearance of the arbitrary left or right leaning lines in the columns that didn’t have braiding.

Anyway, I talked it over with some friends, and the mere act of discussing it helped me see some ways to reconsider my code grid methods again. More about this another time!