I have a long-term project in the works that will involve a range of stitch maneuvers beyond decreases and increases. As a result, I’ve been thinking a lot about names for categories of stitches. This is not helped by the different names given to these categories by different knitting authorities. It’s even worse when you realize that different people use the same word for different maneuvers!

You might think you know what is meant in knitting by a twist, a cross stitch, a cluster, a wrap, or a knot, but I have seen each of these words used to refer to multiple techniques. It’s enough to make me mutter about the utility of controlled vocabulary. But never mind, I can’t make other people be consistent. I can only settle on a list of what I want to call these categories of methods for my project.

Most of these methods combine multiple stitches to make a particular effect, but not all. All of these names are borrowed from other writers; I see no reason to completely reinvent the wheel.

I might use this to describe a particular pair of stitches: the stitch that is commonly referred to as “knit 1 through the back loop” and the one that is twisted in the opposite direction. I am not convinced that I will use it that way, but it is helpful in that it accounts for those of us who do combined knitting, and also for the stitch that twists the opposite direction from knitting through the back loop.

Name source: Principles of Knitting, by June Hemmons Hiatt. She renamed a lot of things to make sense and be consistent, and this is not the only case where I’m going to use her terminology.

This name is used by many people to describe a subset of the next category. 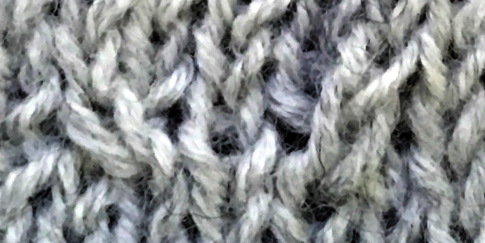 This category includes 1/1 cable crosses and the various shortcut maneuvers that resemble them. One example of the latter is “knit 2 together without removing from the needle, then knit the first stitch”, which resembles a 1/1 right cross, and is often called a right twist.

“Cross stitch” is used by Barbara Walker to refer to both the Threaded Stitch maneuver below and also to the 1/1 cable cross. I suspect she collected the stitch patterns in question from different sources and didn’t want to rename them.

Work two or four elongated stitches on a wrong side row. On the next right side row, pull half of the stitches over (or through) the other half, and knit them before dropping them. Then knit the remaining stitches.

Work one or more stitches in either plain knitting or some more complicated pattern—(k1, yo, k1), for example, and then slip them onto a cable needle. Wrap the working yarn around them , then transfer to the regular needle. Alternately, wrap the stitches and then work them.

Name source: lots of places. This one is one of the closest I found to being standard, though a lot of websites call it a cluster stitch. 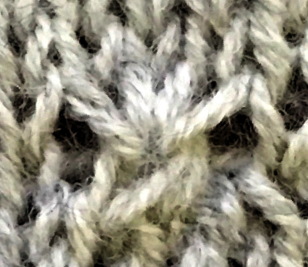 Name source: The Haapsalu Shawl. It appears to be a standard name for this maneuver, which turns up in a lot of Estonian knitting. Another name I’ve seen for it is Star Stitch or Cluster Stitch. 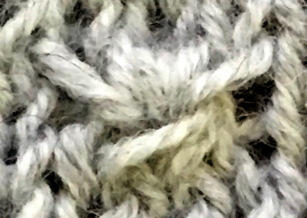 The Estonian gather stitches alternate (k1, yo, k1) to make the increases. The thing is that there are also related stitches that use purl stitches instead of yarnovers. Do I also call those gathers? Or do I call them knots, which also seems to be a common name for them? Daisy is another name, and so is star stitch. 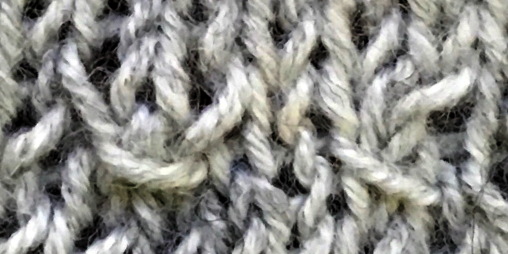 There’s a whole category of stitches that the Japanese Knitting Stitch Bible refers to as knots (I don’t know if that’s a straight translation from the Japanese or not). I haven’t seen a name for the category elsewhere.

The Big Book of Knitting Stitch Patterns from Sterling refers to these as wrap stitches, and at least once as a “group”.

These don’t seem very knotlike to me, but “group” seems too generic. I could call them clusters, but that doesn’t seem right. The maneuver in these stitches is passing one stitch over a group of other stitches, but I’m not going to call these passover stitches! Wrap is somewhat descriptive, but then I’d have to call the wrap stitch above something else, and I’d prefer not to.

I looked up cluster in a thesaurus and found bundle. That has possibilities

Suggestions welcome, though I might settle on something else entirely.