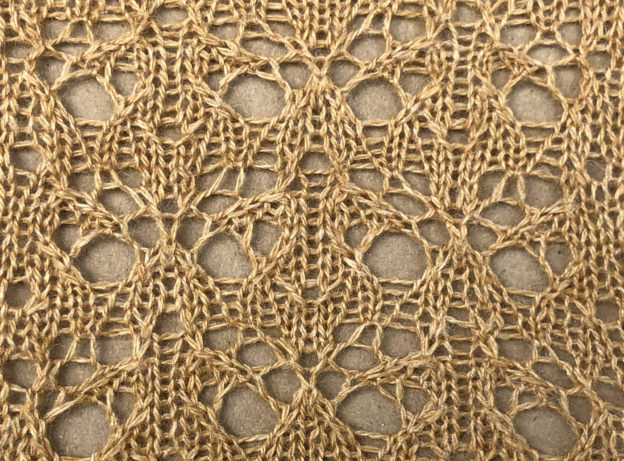 The first word I drew from the words suggested on Patreon this month is Idyll, suggested by Kate, a Patreon supporter. I think we could all use an idyll right about now. Peace, and rest, and beautiful surroundings. Or at least, that’s how I’ve always thought of idylls.

To return to knitting, I can’t tell if I’m just currently obsessed with the bunny ears yarnover, but I think it’s going to be useful in a fair number of code lace layouts that I would otherwise have decided were impossible. I’m using it enough that I’ve started to abbreviate it instead of writing it out in the instructions. Also, this design introduces the alternate form that’s based on bunny ears back, because of the way the decrease lines need to go. Both forms are there, so watch the chart symbols and abbreviations carefully!

Each month, my Patreon backers have the chance to suggest words for me to encode as knitting stitches. I make three of these into knitting stitches each month: the second and third (posted on the first day of the next month) are drawn from the collection of new words; the first is drawn from the collection of unused words. A random number generator helps me choose these, and then I get to work, first turning the letters into numbers, then charting the numbers onto grids in various ways. Finally, when I make the chart into lace, I turn the marked squares into yarnovers and work out where to place the corresponding decreases. (I usually make lace; occasionally I make cables instead.) I also make a chart for any craft that uses a square grid for designing; this goes in a separate post.

The stitch patterns are not meant in any way to look like the original words; the words are the seeds of my creativity.