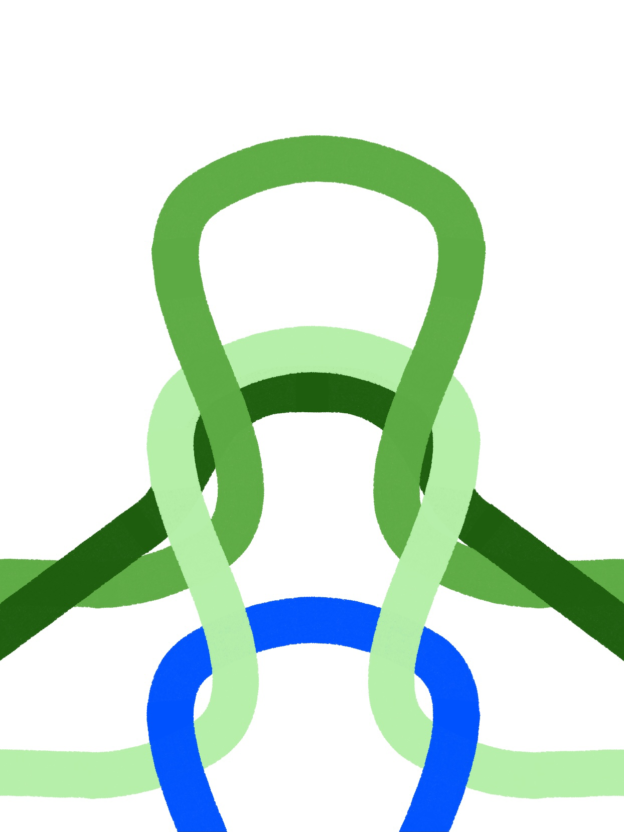 So far I’ve written a series of blog posts about knitting stitch structure, and the three paths the yarn can take between two stitches if it isn’t pulled through a stitch that is between them.

This post is going to be different, and it starts with a story.

More than fifteen years ago, I wanted to knit a baby hat for a neighbor, so I browsed through my Mon Tricot stitch dictionary and was taken by the picture for Brioche Rib. Here’s an exact copy of the instructions from the book, using their knitting instruction style:

Here’s what page 32 has to say about k 1 B, which it confusingly also calls a double stitch:

“This must not be confused with “k 2 together or a “twice knitted” stitch. To form a double stitch insert the right needle through the centre of the stitch below the next stitch to be knitted, so that both are knitted at the same time. Two double stitches must always have an ordinary plain or purl stitch between them.”

So I knit a hat, I worked out how to do decreases that worked for it on my own, and I published the pattern for free before I started publishing patterns in a more professional manner. It wasn’t ever test knit or tech edited, which is why it isn’t currently available. But here’s some pictures. (If I still had the hat, I’d take better pictures, but there it is.)

Anyway, someone in the knitting world, I don’t remember who, except that I remember them as being an experienced and knowledgeable knitter, told me that no, this isn’t actually brioche, because it uses a different method, and besides, in her experience, they were slightly different structures. I took her word for it, though I was slightly perplexed because they looked much the same to me. But I didn’t knit any swatches to see. I just shrugged and thought she must be right because I’d found her other information about knitting correct.

I’ve come across this idea of the k1b version not being proper brioche because of the different method in other places too. I don’t know why I didn’t argue, because my original exposure called it brioche, and there must have been a reason for the author of the Mon Tricot books to call it that!

When I started planning this series of blog posts, I knit two tiny swatches, one in yarnover/slip-stitch brioche rib, and one in k1b brioche rib. I was going to argue that they might appear slightly different, but the overall structure was similar enough that they both fall in the same category.

After all, we call all the knitted fabric with the same structure “knitting” regardless of method, right? “Continental” and “English”; machine knit, hand knit, loom knit, and finger knit. So long as the structure is the same, the means don’t matter.

Why should it be different for brioche?

Anyway, I knit my two swatches and I looked at them. There was no slight difference between the stitches, aside from the selvedges, but that’s because I used different methods at the selvedges, following the instructions at the two different blog posts I read. (You can see that I haven’t quite got the knack of the selvedge used in the left swatch, but that’s not important for the point of this post.)

Needs one row of plain knitting as a set up row.

I wondered to myself if maybe people assumed that I was using this method, and if maybe the purl instead of the knit is the thing that makes the slightly different structure.

Here they are, all stretched out. See? The middle one got stretched more side-to-side, but I think these show that they’re all the same structure. I mean, I could be lying to you, though I don’t know why I would do that. I could have knit them all in one single method; the only way to be sure is to try it for yourself. I find the structure easiest to see in the two-color versions. Here’s links to instructions for the first two:

And my instructions for two color brioche rib made with the k1b method:

Cast on a multiple of 2 stitches in color B and purl one row.

(Note that the selvedges on this are messy; I haven’t figured out the best method for this.)

So, how does this have the same structure as the yarnover/slip stitch method? Remember that I described the yarn that would otherwise have been pulled through the slip stitch being lifted over the top of the stitch as a yarnover.

It doesn’t matter if the stitch that unravels was knit or purl, because once it unravels, and the stitch is pulled on in the course of knitting or washing, the yarn that was made into knit or purl slides into the yarnover position for brioche.

I have no opinion about which method is easier, with one exception: when undoing the results, it’s slightly easier for me to see how to go forward again with the yarnover/slip stitch method.

There are other brioche stitch patterns aside from brioche rib; I’ve certainly seen several with the slip stitch-yarnover method. The Mon Tricot books all have k1b versions of brioche rib, brioche honeycomb, half brioche, and contrary brioche, which is similar to what I’ve seen called syncopated brioche; it just has a different number of rows. The Mon Tricot stitch dictionary with the most k1b brioche stitches is the last one, with 1500 stitch patterns in it.

There is also a book called Knit One Below, by Elise Duvekot, from XRX books. Duvekot came up with a (k1b, k1) fabric that’s a bit different from brioche rib, kind of like a stockinette version of it (though not what Barbara Walker calls brioche stockinette). Duvekot doesn’t use the term brioche or compare her technique to it, though I think it fits in with other brioche. It includes some k1b decrease methods, which is helpful.

So, on the one hand, I think this is all brioche. On the other hand, there are difficulties to calling it all brioche.

If I publish a pattern using the kind of brioche I first learned, and I don’t say in the description the purchaser sees before buying that it’s using the much less common k1b method, then a knitter who buys it might be highly disappointed because of its unfamiliarity. The two methods feel different even though the structure is the same. The motions are different, and I think of the methods as being half a row out of phase with each other. Note as of 9 March 2022: they are not actually half a row out of phase.

Determining that they are not out of phase makes it easier to consider the conversion of patterns from one method to the other, and also makes the increases and decreases easier to work out for the k1b method.

I don’t think one is superior to the other.

I just think it’s all brioche.