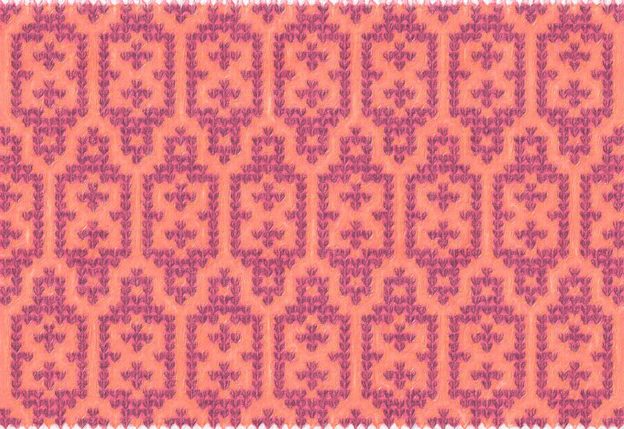 I shared a needlework image on twitter last month (it was a blooper chart for Sunrise), and a twitter friend asked if it could be used for mosaic knitting. I said no, and then I realized that it might be interesting to provide some guidance for people about how to tell.

Say you find a cross stitch chart, a stranded knitting chart, or a pattern made from square tiles on a bathroom floor (a literal mosaic!). Can it be worked as mosaic knitting? Here’s some ways to figure that out.

(Important note: this is all about how to figure out if an image that’s been seen can be worked as mosaic knitting, and the process is extremely graphical. I’m really not sure how to write about this process for people with difficulty seeing. I have included written instructions for the one chart on this page that does function as mosaic knitting, which is not the same, but feels like a bare minimum.)

The easy method to see if a chart is feasible, if you don’t want to work it out by hand (which I think is worth doing at some point, just as a way of comprehending the underlying structure), is to use Scott Pakin’s online web app for checking if something is a viable mosaic chart.

First, some basics about mosaic knitting.

What do these things mean for whether a random chart can be worked as mosaic?

First, if there is anywhere in the chart a two-by-two square that looks like a checkerboard, then the chart cannot be worked as a mosaic, because it violates the rule that a slipped stitch has to have a knit stitch underneath in the same color.

Patterns in mosaic knitting are formed with boxy corners and vertical and horizontal lines.

This is the stranded knitting pattern I was asked about.

Here’s a two by two checkerboard in it; it fails the test immediately. (It fails in other ways too, but that’s the quickest indicator.)

The remaining two patterns I’m going to test are a couple of traditional stranded knitting patterns I found in Vibeke Lind’s Knitting in the Nordic Tradition. Many traditional stranded knitting patterns rely on diagonal lines of dots and will therefore be full of the kind of checkerboard I show above. However, some don’t have that kind of pattern. That doesn’t mean they’ll work, however.

There’s no name for this one in Lind’s book. It’s a basic geometric design she says is used in Faroese knitting. It’s got horizontal and vertical lines, so I think it’s promising!

Here’s one repeat (plus an extra row at the top and one side; I’ll outline those below), with a bar up the side that I’ll use to mark which chart rows are knit in dark with light slipped stitches, and vice versa.

First I look at the bottom row. Does it have more dark or light stitches? I’ll try that for the color to be knitted. If I get through the whole pattern and I don’t think the chart works, I might try swapping the colors to see if that makes a difference.

In this case there’s no stitches that could be slipped in the bottom row, so I’ll start with dark and then mark the alternating rows accordingly.

The top row isn’t really part of the repeat, which is good, since a mosaic chart needs to have an even number of squares in the bar on the side, as otherwise there’d be two chart rows in a row that were the same color.

Now I’ve scribbled the repeat lines on the chart as well as the slipped stitches so I can see the structure. (I could do these with perfectly straight lines, but I usually do scribbles when I’m figuring things out, and I like to make it clear that this stuff doesn’t have to be perfect all the time.)

I’m going to mark the slipped stitches with Vs. The background color of those squares is the color that will be slipped.

Okay, so the first chart row is definitely dark; there are no slipped stitches.

Since the second chart row is knit in light, I’ll slip any dark squares. So far so good, as there’s a dark knit stitch underneath each slipped stitch that can be slipped.

The third chart row is knit in dark, so any light squares are marked as slip stitches, and so on in alternations.

Start with color A (dark)

Switch to color B (light).

There’s lots of nice isolated speckles in this that I think will be fine for mosaic knitting, but it’s the little stars that need to be tested.

Here’s one repeat, with a column up the side that I’ll use to mark which chart rows are knit in dark with light slipped stitches, and vice versa.

When I look at that first chart row, it’s almost all light squares, so that will be marked to be knit in the light color, with the dark stitch slipped

Here I’ve marked the side bar accordingly with alternating colors. It starts with light and ends with dark, so that works out well; there’s equal numbers of dark and light rows.

The first time through the pattern, that dark square can be slipped, as the setup rows will have been worked in dark yarn. However, after the first time through this chart, that dark slipped stitch in the first row will not only be above a light stitch from the top row, but that light stitch would also have to be a slipped stitch. There’s multiple places in this design where there would be two slipped stitches above each other, and that just doesn’t work for mosaic knitting.

Furthermore, if you look at the fourth row (the second dark row), there’s more light stitches than dark, which just isn’t feasible.

I wondered if I could modify this chart to make it work as mosaic, and the answer was yes.