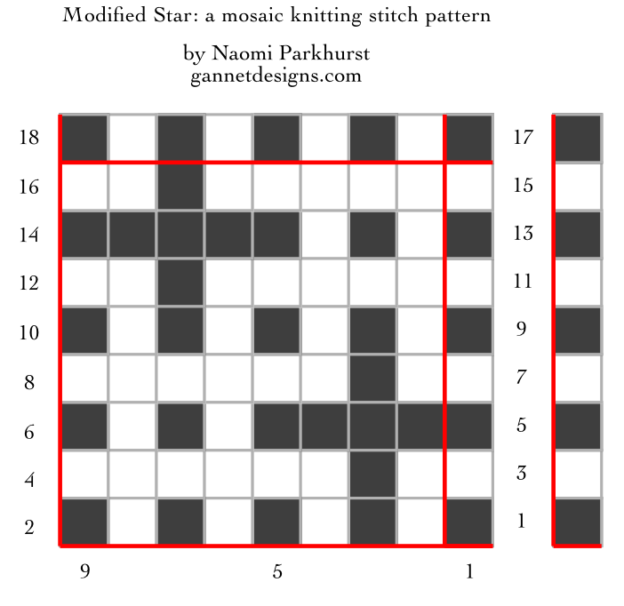 I ended my post about figuring out whether a chart works as a mosaic knitting with a chart that didn’t work for mosaic knitting. However, I wondered if it could somehow be altered to be feasible.

This post is about the process of making it work.

Of course, this won’t work for every non-mosaic chart, but I did work out how to adjust this one, and here’s the process I used. (I’m afraid it’s very graphics oriented.)

The problems in this chart were these:

I’ve added the rows above and below the repeat for more context; I should maybe have added the stitches to either side, but I hope it will be comprehensible.

The dark slipped stitch in the first chart row doesn’t have a plain dark stitch underneath, so I’m going to add that. I’ve also added it in the top row of the repeat, which is where it properly belongs.

That looks fine, but I’d like all the rays of the “star” to be all the same length.

Fortunately, making the horizontal rays the same length as the vertical ones fits well in the mosaic knitting format. In fact, it makes it even easier to work this one, as there are no longer two slipped stitches next to each other anywhere in the chart.

Here’s how it looks repeated. It’s definitely got a different feel to it from the original, but I still like it. (I think it would also be good with dark and light reversed.)

Start by knitting two rows in color A (light squares in chart above).

Switch to color B (dark squares in chart above).