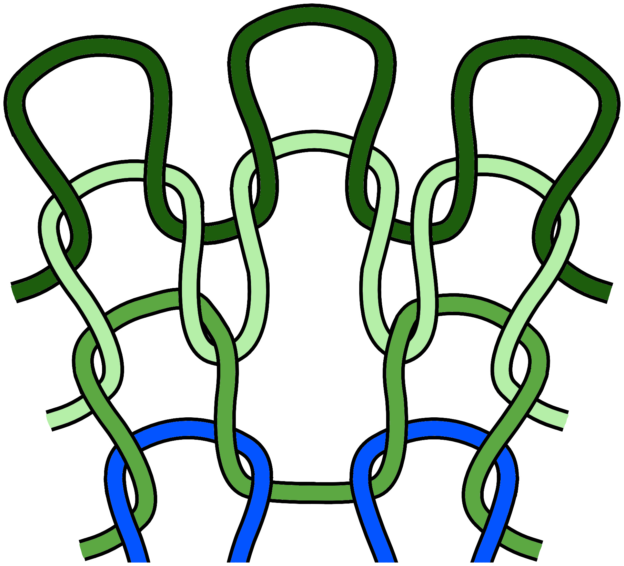 I had a specific request to do one for kfb (knit in the front and back of a stitch to make two stitches), but I’m not going to start with that. I’m going to go through a whole sequence of basic increases, starting with M1.

M1 (short for “make one”) is actually a tricky abbreviation, as it sometimes gets used for all kinds of increases. (The Mon Tricot books, for instance, use m1 as the abbreviation for any increase throughout, and define it within the instructions for each stitch pattern.) However, there is one increase called m1 which has no other name that I’ve ever seen*. So I’ll start with its most basic form.

*I haven’t seen every knitting guide in the world by a long shot, so I’m guessing someone has probably called it a “lifted increase”, which would be confusing given that there’s a different increase I know with that name.

This illustration shows two columns of stitches that have already been worked for three rows. The first stitch of a fourth row has been knit. Now I want to make three stitches above these two stitches. What to do?

There’s lots of options here, but for m1, I’m going to make a stitch in the row below by lifting the strand between the two stitches on the row below to make it into a loop that can be worked as a stitch. The yellow arrow in the illustration above is pointing at the strand in question.

Here I’ve pulled the bar up to make a loop. (If I were including needles in the image, the loop would be on the left needle ready to be knit like a stitch.)

The loop has had yarn pulled through it to make a stitch. The third stitch has been knit normally. There is a hole now in the knitting formed by lifting the bar. The bottom part of the hole is made by the gap between stitches on row 2 and the space under the lifted bar in row 3. This is like the hole formed by a yarnover, but with two differences: