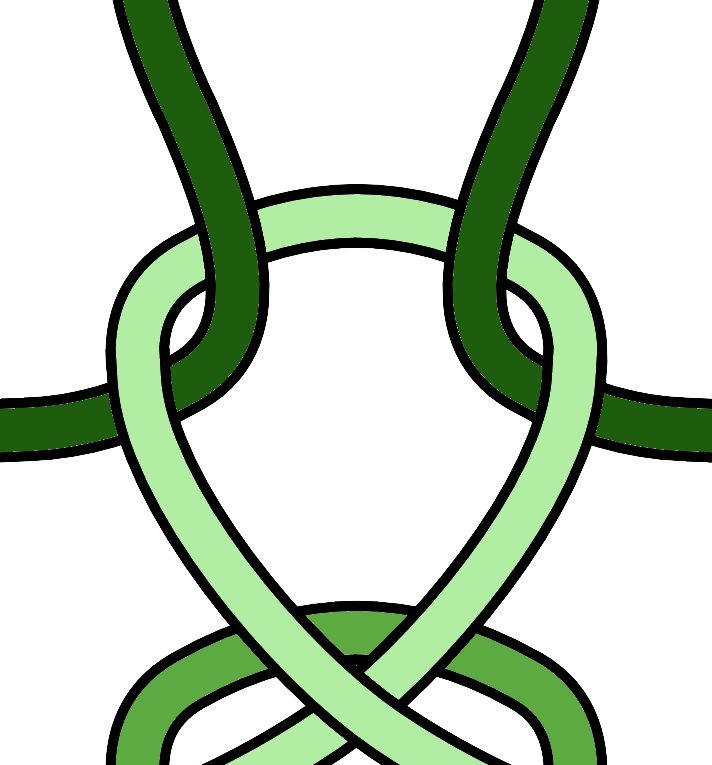 I realized I needed to explain the structure of the stitch named ”knit one through the back loop” (K1 TBL) to make it easier to explain the increase called ”knit in front and back” (KFB), which is one of the most common increases taught to beginning knitters.

I’m going to stop and explain the terminology that is used in regard to this stitch. I find it vexing, but it’s pretty much the standard in English language knitting. I’m also going to make an exception for the first illustration and include the needle, because it explains the terminology.

Here is a light green knit stitch sitting on the needle; the bottom of it is anchored by the top of a medium green stitch from the row below. For whatever reason, the two sides of the stitch are frequently referred to as two different ”loops”. I don’t know why; it’s all one loop. A less common name for the two sides is “legs”. This makes more sense, but it’s useful to know both terms.

In most Western European and American knitting, knitting stitches are formed so the right leg sits in front of the needle and the left leg sits in back. This is called stitch mount (that’s an old blog post of mine). As a result, the right leg is referred to as the ”front loop” and the left leg is referred to as the “back loop”.

Knitting through the front loop just means knitting a stitch.

Here is an existing light green stitch that was worked on the previous row or round. It’s ready to have something done to it to form another stitch.

Sometimes a knitter wants to add a half twist to an existing stitch while knitting it. English-speaking knitters refer to this as knitting a stitch through the back loop. I think the reason we don’t usually call it a twist is that we refer to a different pair of methods as right twist and left twist.

When a loop of dark green yarn is pulled through the twisted light green stitch, this is the result. Rather than the light green stitch being open at the bottom, the legs of the stitch are crossed so that the leg that was on the right is in front, leaning to the left.

There’s a variety of uses for knitting ”through the back loop”, most of which tighten up a loose stitch.