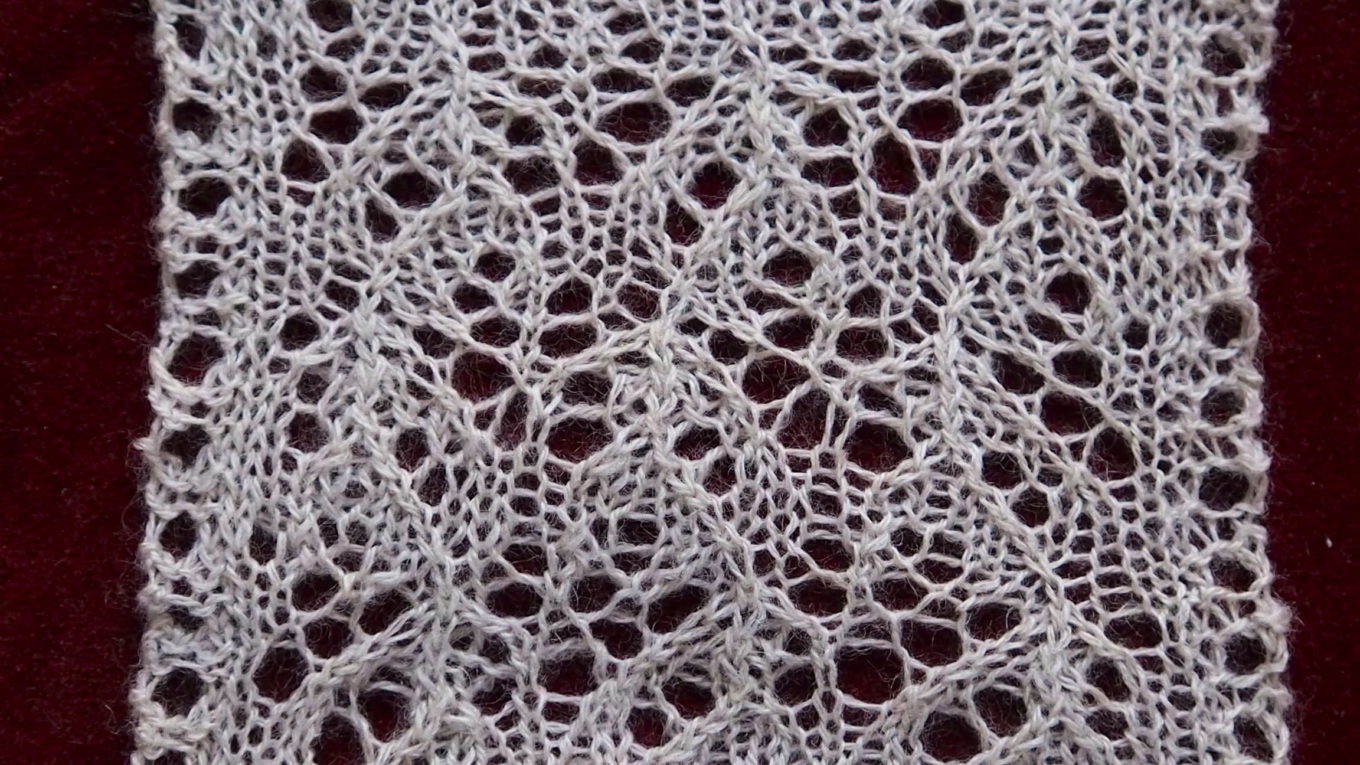 A while back, I designed some lace based on the word Sprout. Every time I’ve recently had reason to look at the photo of the sample I knit back then, I’ve been dissatisfied. It’s got messy edges and looks incoherent. I’ve stared at it and wondered: did I knit it at the wrong gauge? Should I have knit 1 through the back loop above every yarnover? Did I stretch it too much when blocking? Is the design inherently bad? Is it bad photography?

I have a policy of not reworking past word designs once published aside from changing formatting or fixing errata, but it occurred to me that while I don’t know where the original sample is, I could reknit a sample for it and perhaps answer those questions for myself while walking through my thoughts in a blog post. I mostly don’t talk about lace design here, but this feels like a special case to me.

The first question is gauge, which I’m inclined to think is not a factor. I no longer have this yarn but I remember using it. I had a standard needle size I used with it, and I suspect I used those needles for this swatch. The other thing is that lace is in general forgiving of gauge variations. However, since I’m reknitting it in the yarn I’m currently using for my lace samples (Jaggerspun Zephyr 2/18 laceweight), I will definitely be using the needles I know are my preferred ones.

A side note here: the main factor in the messy edges is that I hadn’t yet worked out how to knit my sample edges for easy blocking. I’m using the linked method for today’s sample. Since we all learn things with experience, I am not as bothered by that aspect of the whole thing as I am by my willingness to post a design which looks so— unclear? chaotic? incoherent? Something like that, anyway.

I cast on enough stitches for three horizontal repeats. and then I knit one vertical repeat as written before stopping to look at the result. I’m going to share how that section looks after a gentle block because it’s easier to see what’s happening:

I’ve outlined the stitches above the yarnovers in the first repeat on the right in an attempt to show the problem. These stitches are spread out because of the yarnovers beneath. The effect in this case just looks like a messy set of openings with no clear pattern.

So, yes, there is something wrong with the design. I always want to have strong decrease lines, but I also want the yarnovers to look interesting somehow. I usually like the openness of the stitches above yarnovers. One of the things that I think is notable about my lace is that it sometimes looks like something natural or organic, in the original sense of the word: of, relating to, or derived from living organisms. There are some of my stitch patterns that remind me of plant cells as seen under a microscope. The openness of the stitches above yarnovers contributes to that effect, as in my encodings of Xylem (one of the kinds of plant cells I mean) or Sway.

However, in the case of Sprout, it just makes everything between the decrease lines look messy and unclear.

There is a technique used in some lace which I found described in a Donna Druchunas book about Dorothy Reade’s lace. Dorothy Reade didn’t like the way the stitches above yarnovers are loose and open; she wanted them to be the same size as other knit stitches, and so she would knit them through the back loop. She called it outlining. I think it especially makes sense in the style of lace Reade designed, but I have come to admit that I think there are times it works better for my kind of lace too. Usually I only use it above one or two yarnovers in a stitch pattern, but Sprout is such a mess that I thought I would try putting it above every possible yarnover. (The ones that aren’t immediately decreased away.)

Well, would you look at that? I think that’s a huge improvement! Though oddly, there’s now one more spot that could use a k1 tbl: the plain knit stitch between two yarnovers on row 3 (it’s the first stitch in the repeat) would look better if it were twisted to look more like the twisted yarn between the diagonally-placed yarnovers. I’ve drawn in yellow around one of the stitches I mean. So, one more vertical repeat.

The next question is blocking. There is an enthusiasm among many knitters for stretching lace out to the utmost when blocking it. This can have merit, but it also has potential problems. In this case I wonder if it exacerbates the original problem with the design. I’m going to block the swatch twice, once gently and once more firmly,

Here is the gentle block; I put my blocking wires in the eyelets and pulled just enough to make everything flat, but no further.

Here is the firm block. I pulled as hard as I could. I think this possibly looks a little messier in the bottom repeat since everything is a little bit more open?

Finally, there’s the question of photography. I think there’s no question that I’m taking better photographs these days, though I still have room for improvement, but I think part of the problem with my original sample photo is the background color. Nonetheless, I think the main problem with the original version was not twisting the stitches above the yarnovers by knitting them through the back loop.

The new chart and instructions are on the original blog post for Sprout lace.