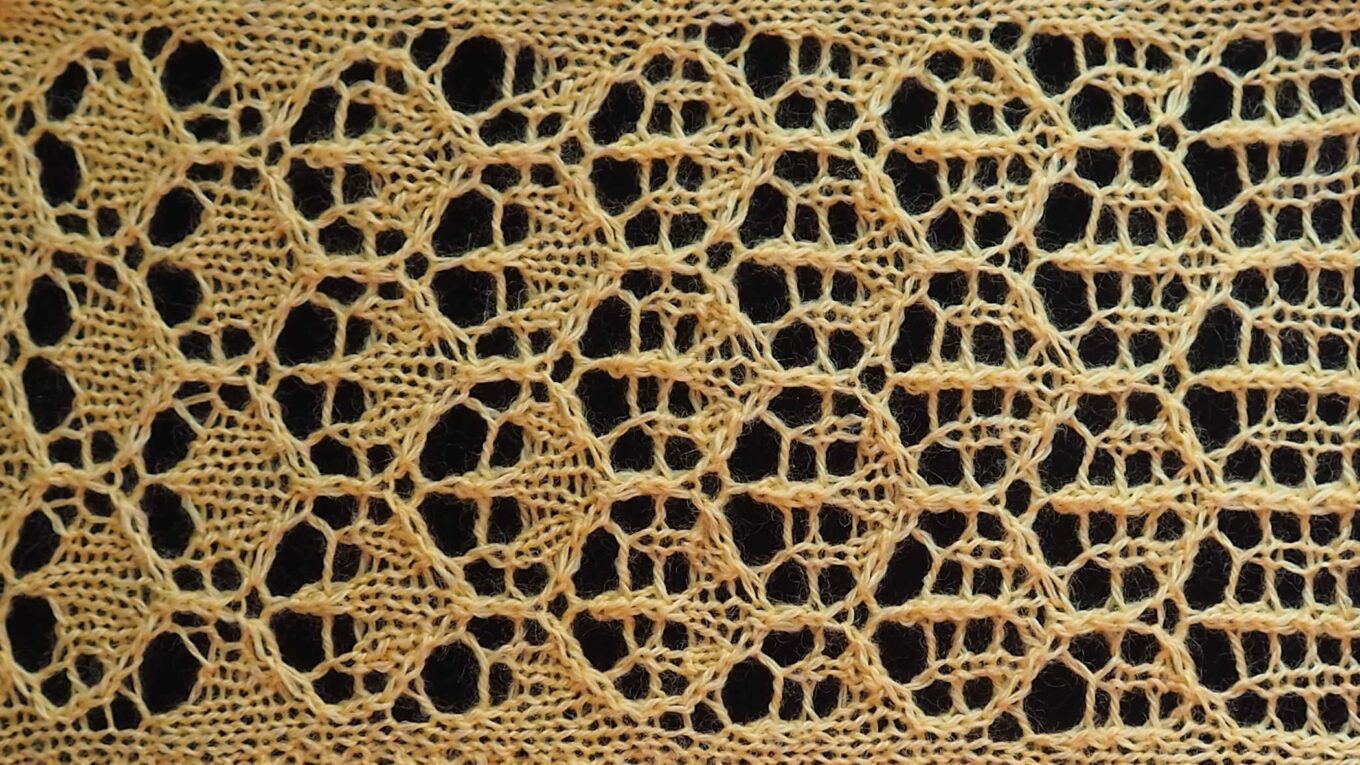 I realized when I was working on the Kelpie lace hexagon patterns that I wanted to stop and explain in some detail how to combine the four different hexagon variations.

Here is the Kelpie lace gradient sample (figure 1) next to a drawing of the hexagon outlines (figure 2). There are four different variations of this lace. Within the hexagonal outlines, the bottom part of each hexagon is the same; the variations happen in the top parts.

However, the stitch pattern repeats in the charts and the written instructions don’t line up exactly with the hexagons. This is because the rows that include the tops of one band of hexagons also include the bottoms of the next band. (By “band” I mean a horizontal line of hexagons.)

There are two ways to handle this in a rectangular stitch pattern. I had originally done it by having the last set of hexagon points added at the top with a set of closing rows, but this turned out to make a mess out of the transition between Kelpie lace hexagon 3 and Kelpie lace hexagon 4. It was difficult to explain.

I’ve reworked the instructions and charts for all these stitch patterns to have setup rows instead of ending rows. (If you’re making the gradient version, you’ll only need to knit the setup rows for the first band of hexagons.)

To make it easier to understand, here’s just Kelpie lace hexagon 1 (figure 1). In figure 2, the corresponding sections of the stitch pattern are laid out in stripes. There are two bands of hexagons, but the bands are divided into three horizontal stripes, with the bottom stripe narrower than the other two. The bottom stripe with zig-zag triangles represents the six setup rows for each Kelpie hexagon.
The next stripe, with what look like stylized houses with triangular valleys between their roofs, is like rows 1-8 of any of the four Kelpie hexagon stitch patterns. The valleys are the bottom points of the next band of hexagons.

The last stripe of house shapes is like rows 9-16 of any of the four hexagon stitch patterns. This looks like a set of houses which are slid halfway over from the first band, with the house on each end cut in half. Each house shape plus the triangle under it makes a hexagon.

What does this mean for you?

If you want to make a lace gradient similar to the one in my Kelpie hexagon lace sample (figure 1), there are two options. (You’ll need to add some sort of selvedges or maybe some shaping; these instructions are very broad design suggestions rather than a finished pattern.)

If you want an even number of bands of each hexagon, the progression is straightforward:

If you want an odd number of bands of each hexagon, it’s a bit more complicated:

This is outside my usual range of blog posts, so I am grateful to the friends who helped me edit it into better shape.